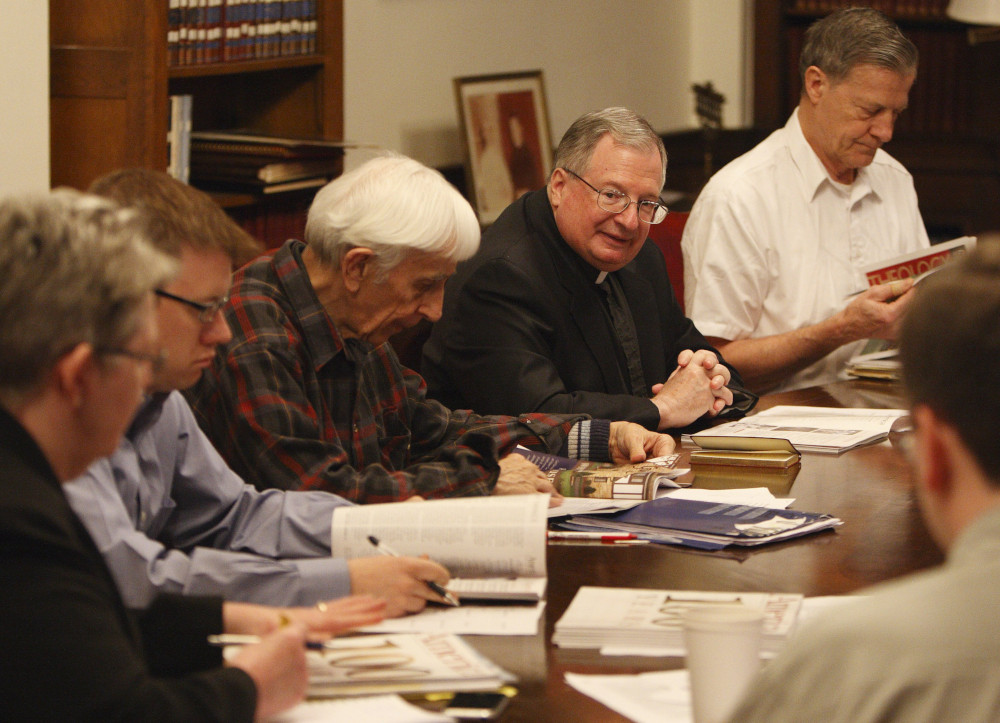 Jesuit Fr. Drew Christiansen, a professor at Georgetown University and formerly head of the U.S. bishops' Office of International Justice and Peace, died early April 6 in Washington. He was 77.

Christiansen had been battling recent health issues, but no cause of death was released. The year 2022 marked his 50th year as a priest, and his 60th year as a Jesuit. 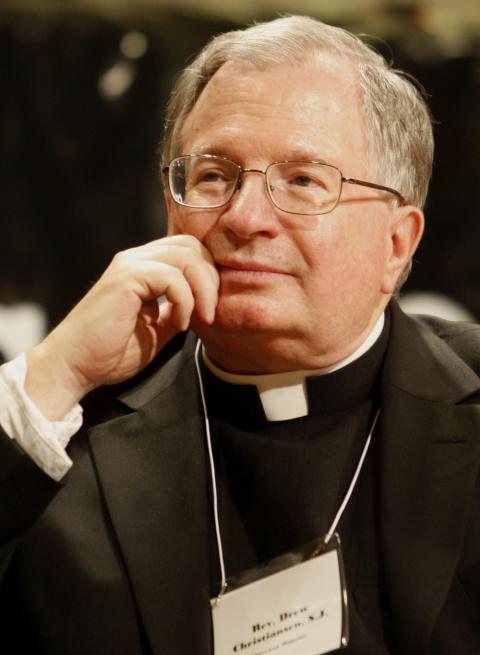 Jesuit Fr. Drew Christiansen, listening to a speaker during a conference in Washington in March 2009. (CNS photo/Bob Roller)

Never one to stray too far from education, Christiansen's position at the time of his death was as distinguished professor of ethics and human development in Georgetown's School of Foreign Service and senior fellow at Georgetown's Berkley Center for Religion, Peace and World Affairs.

In that role, his last public comments and writings were about the Russian invasion of Ukraine.

"The international order has been shifting for some time. The Russian-Ukraine War is only the latest disruption," Christiansen said during a roundtable sponsored by the National Catholic Register and posted online March 16. "Climate change, the coronavirus-19 pandemic and the rise of China had already begun to re-shape international relations."

"The war in Ukraine," he continued, "sets back the efforts at reducing climate-warming gases, both directly through the pollution created by bombardment, and indirectly through the doubts it places on nuclear power and the scramble it has created over fossil fuels, particularly dirty fuels like those from the Canadian tar sands."

He added: "The surprising developments emerging from the (Ukraine) crisis, beyond the revival of NATO, include renewed commitment by member states to the U.N. Charter and the values undergirding it, and new confidence, if not in the liberal international order, then at least in the rule of (international) law," he added.

In a March 8 essay for America magazine, he wrote: "The editors of America have asked me whether the Ukraine war is one where the international doctrine known as the 'responsibility to protect, or R2P, might apply as a remedy for this savagery."

"Yes, it does," Christiansen said, "because Ukraine needs assistance in protecting its citizens, but it probably does not apply in the direct sense of armed military intervention to rescue those threatened civilians."

Christiansen served at America, a national weekly Jesuit publication based in New York, for 10 years, from 2002 to 2012. For the last seven of those years, he was editor-in-chief.

The concepts of just war as they apply to Russia's invasion of Ukraine were mirrored more than 30 years before during a panel discussion on U.S. conduct against Iraq during the Persian Gulf War, that the priest took part in.

During the 1991 parley, the Jesuit priest -- then professor at Jesuit-run Santa Clara University -- said he was concerned about the U.S. government's apparent eagerness to resort to "mid-level intensity conflict" at any trouble spot in the world with the current lack of a Soviet superpower counterbalance.

He said he feared Catholic just-war teaching "will fail in its attempt to stop war or curb its violence."

In 1991, Christiansen was appointed the director of the U.S. bishops' Office of International Justice and Peace. Prior to that, he held teaching or research posts at Georgetown, the Jesuit School of Theology at Berkeley in California, the University of Notre Dame in Indiana, where he helped found Notre Dame's Kroc Institute for International Peace Studies, and Santa Clara.

While in the bishops' employ, Christiansen made more than a dozen trips to the Middle East, the Balkans, Haiti, Mexico's Chiapas state and other world trouble spots. He also led three pilgrimages of U.S. Catholic social action directors to Israel.

He often testified on Capitol Hill or wrote to members of Congress on issues ranging from the Middle East peace process to peacekeeping in Bosnia, from human rights in China to religious rights in Russia.

He fought against declining U.S. foreign aid in the post-Cold War era and helped lead the bishops' involvement in emerging fields of Catholic teaching on the environment, growing problems of Third World debt and the international campaign to ban land mines.

He joined the bishops' conference partly as a result of his work as one of the bishops' consultants in the drafting of their pastoral letter on Catholic social teaching on the environment, "Renewing the Earth." The bishops completed and approved the letter in November 1991, three months after he was hired. Subsequently the bishops opened an environmental justice office under the direction of his office.

He assisted the bishops' committee that wrote "The Harvest of Justice Is Sown in Peace," a pastoral letter on war, peace and nonviolence, which the body of U.S. bishops adopted in 1993.

After 1995, when the bishops unanimously adopted a statement criticizing the international arms trade and urging a global ban on anti-personnel land mines, his office coordinated intensive efforts by the bishops to get the United States to move toward a complete ban on such mines.

Although he left the bishops' conference to become a fellow of the Woodstock Theological Center in Washington, Christiansen continued to serve the bishops as a consultant on the Middle East.

In 1997, he was selected as one of the U.S. experts for a special Synod of Bishops for America.

During Christiansen's tenure at America, he tackled several projects, including instituting a new board of directors comprised of Jesuit and lay trustees, expanding America's online presence and leading the publication through its centennial celebration in 2009.

In 2013, Christiansen was one of 50 signers of a letter opposing The Catholic University of America's acceptance of a $1 million pledge from the Charles Koch Foundation to build a new business school.

He acknowledged that the university's response about the no-strings status of the grant answered some questions, but said there was a legitimate question of bringing scandal to the university when an organization connected to the institution "is constantly promoting criticism of Catholic social teaching."

Christiansen was the author of more than 150 articles on moral theology, ethics and international affairs, war and peace, environmental ethics, Catholic social teaching and family care of the elderly.

He was a member of the steering committee of the Catholic Peacebuilding Network. He also served on the Atlantic Council's Middle East Task Force and was on a Vatican delegation that participated in the negotiation of the Treaty on the Prohibition of Nuclear Weapons during summer 2017.

Before joining Georgetown for the last time, Christiansen was a visiting professor at Boston College, another Jesuit institution.

Jesuit Fr. James Martin tweeted April 6, "Dear friends: I am extremely sad to share with you the news that my Jesuit brother Drew Christiansen, SJ, has died at age 77 at the @Georgetown Jesuit community. Drew was the former editor in chief at @americamag, a superb scholar and a kind Jesuit priest. May he rest in peace."