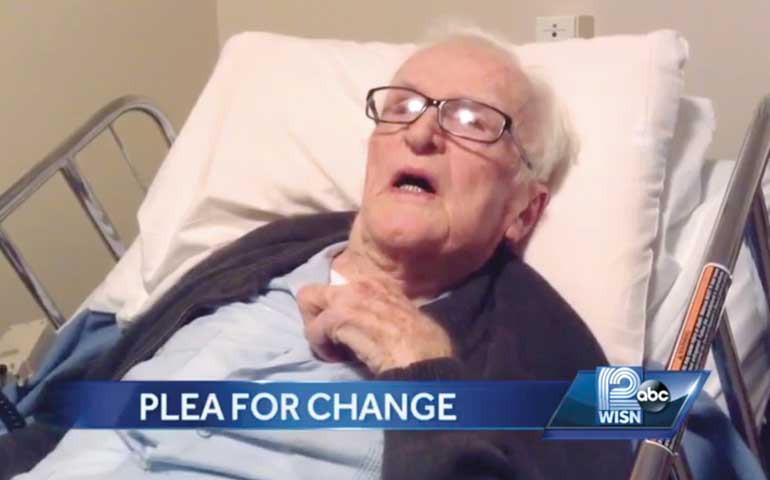 A screencap of Jesuit Fr. William Brennan's video on the website of WISN-TV in Milwaukee

Seven months after his death, a Jesuit priest's call for the ordination of women has been released in a video.

Jesuit Fr. William Brennan died Aug. 11, 2014, at age 94. But he had previously asked his friend Alice Iaquinta -- a woman ordained in the Roman Catholic Womenpriests movement -- to record him standing by his conviction that women are called to the priesthood. He asked that she wait to release the message until after he had received a proper Catholic burial.

Filmed from his hospital bed, the video, released by a Milwaukee local TV station March 7, reveals Brennan struggling between "espousing women's ordination … and the duty of obedience to the authority of my church," he said.

"I would like to leave the impression that I'm not of the school of alienation," he said in the video. "I wish to be remembered as one who was basically pleading for equality of women in administrative and spiritual functions of holy Catholic church."

According to the Catechism of the Catholic Church, only men can be ordained to the priesthood, and attempting to ordain women would result in immediate excommunication.

When Brennan participated in 2012 in a liturgy with Janice Sevre-Duszynska, ordained through the Association of Roman Catholic Women Priests, the Milwaukee archdiocese and his Jesuit superiors sanctioned him. They forbade Brennan to practice his priestly faculties, attend public worship, speak to the media, leave Milwaukee without permission from superiors, and present himself as a Jesuit priest. Until the release of this video, Brennan had fulfilled those wishes.

"He was always exceedingly cautious in how he expressed himself," Iaquinta, who recorded his message, told NCR. "He always made sure to honor the obedience vow that he made and prefaced everything he said with an acknowledgement that he had made a vow of obedience to the Jesuits, and that he wasn't being disobedient, but he was also being obedient to his conscience."

In the video, Brennan credited his mother for his sympathy toward women's rights. He said that when his Jesuit brothers disputed women's ordination, he realized he "did not share their hostility," recalling his "childhood awareness" of his mother once being unable to vote.

"I want to make clear that I see it as a peaceful challenge for a compromise and recognition of women's roles in the church," he said. "I think this is a call of the Spirit."

Iaquinta said that while he fought hard for justice and for immigrants throughout his life, "it was the women's issue at the end that really disturbed him."

"He was fully cognitive -- his mind sharp as a tack [that day]," Iaquinta said. "He was not distressed or upset or afraid or nervous, but he said he felt so guilty. He said to me that day that he felt like a coward, that he felt he had not stood up when it counted and that he needed to stand up, even though he was flat on his back, before he died. He couldn't in good conscience leave this world without making this statement. This was not a grandstand play at the end."

A version of this story appeared in the March 27-April 9, 2015 print issue under the headline: Jesuit made deathbed call for women's ordination.