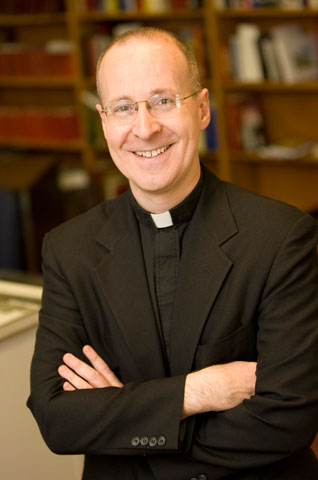 In mid-September, two of the loudest personalities in Catholicism today -- Cardinal Timothy Dolan of New York and comedian/faux political pundit Stephen Colbert -- gathered for an intimate discussion of faith and humor with students at Fordham University in the Bronx, N.Y.

By all accounts, the forum at Fordham was a success, with The New York Times deeming it "the most successful Roman Catholic youth evangelization event since Pope John Paul II last appeared at World Youth Day," as the church met young Catholics where they are -- tweeting, laughing and, of course, watching Colbert.

As it so happens, those are the same places you can find Jesuit Fr. James Martin, who was also in the middle of the Fordham scene -- literally seated between the cardinal and Colbert, moderating the conversation but also playing a key role in helping two Fordham professors set the whole thing up.

In calling the night the essence of the new evangelization, Dolan described the type of ministry Martin practices each day -- online, on TV and on the altar.

Finding God in all places

Already an author of nine books, Martin's latest project has him exploring the life of Christ through textual study, spirituality and his 2011 pilgrimage to the Holy Land.

Unfortunately, his days offer no such luxury. Simply put, Martin is busy spreading the faith -- everywhere.

A contributing editor at America magazine, Martin blogs and writes for the weekly, all while interacting daily with his many Facebook and Twitter followers. In April his hashtag #WhatSistersMeanToMe -- a way for people to show support for U.S. women religious under Vatican investigation -- gained attention among the national media who frequently turn to him as a source or guest commentator. His media appearances have ranged from "The O'Reilly Factor," MSNBC and the BBC, to the History Channel, PBS, Vatican Radio and Comedy Central's "The Colbert Report," where he serves as the show's official chaplain.

"It's a great way of evangelizing," Martin said. "I reach more people in those five to 10 minutes that I'm on his show than I would in a year of homilies."

Martin's amiable media persona partially developed with the help of former America editor Jesuit Fr. Tom Reese, who said, "It's rare that you find somebody who has a business background, is artistically sensitive, is concerned about social justice and spirituality and movies and Broadway. ... I mean he's like the Renaissance man."

But for Martin, the media spotlight isn't on him, but rather on his ministry. He often says that Jesus used the medium of the parable, so we should use every tool available in today's evangelization.

That perspective has led him to delve into a diverse landscape: writing, blogging and vlogging about his experiences with Ground Zero workers; delivering his favorite jokes in a "Forty Days of Funny" online series promoting the paperback debut of his book Between Heaven and Mirth: Why Joy, Humor, and Laughter Are at the Heart of the Spiritual Life; and even daring to compare and contrast Jesus with actress Lindsay Lohan.

"I think God would be fairly disappointed in us if we didn't use every means of pop culture to try to spread the good news," Martin said.

While he is certainly not the only priest tweeting or talking the faith through the language of pop culture, Martin is arguably the most visible, and possibly the most skilled.

"I thought he could do the media stuff very well. I never dreamed he would become as prominent and articulate and good at it as he has," Reese said.

Part of what makes Martin is his voice -- humorous and insightful, but above all relatable.

"There's a humility about him and kind of a self-deprecation that is very refreshing. I don't think Jim takes himself too seriously," said Sr. Janice Farnham, a friend and former professor of Martin's at Weston Jesuit School of Theology (now part of Boston College) in Cambridge, Mass.

"He is happily a priest, one who wears his Roman collar not as a sign of authority, but of service," said Farnham, a Religious of Jesus and Mary in Arlington, Mass.

Presenting complex Catholic theology in a digestible but not watered-down way is often a stumbling block for Catholic authors, said Jesuit Fr. Walter Modrys, but that "is not true with Jim," with whom he worked while pastor at St. Ignatius Loyola Parish in Manhattan, N.Y.

"His talent is he can take a difficult concept, say from Ignatian spirituality or problematic situations in the church, and speak about them in a way that is very accessible to people who don't have a particular theological background," he said.

Accessibility defines Martin's books -- The Jesuit Guide to (Almost) Everything: A Spirituality for Real Life alone has sold 150,000-plus copies; Between Heaven and Mirth well over 70,000.

"He's just got a very unique, fun voice, a way to appeal not just to Catholics but wider audiences," said Mark Tauber, senior vice president and publisher at HarperOne, which printed The Jesuit Guide and Between Heaven and Mirth.

Reading a chapter in one of Martin's books equates to reading a chapter of his life. Such is the case with his latest project -- before making his Holy Land pilgrimage, Martin hesitated, fearing it had become a tourist destination. But seeing the Sea of Galilee largely unchanged from Jesus' time was overwhelming.

"I could have died in Galilee and have been happy, and could have said, 'I've seen all I've ever wanted to see,' " he told NCR.

Through personal tales like these and often with a laugh, Martin's writing voice becomes a reader's friend, not talking authoritatively but walking alongside through theology and spirituality.

At 26, Martin wasn't a Jesuit, but a budding financial executive at General Electric, mostly in New York, and a business graduate of the Wharton School in Philadelphia.

Miserable in the quest for more money, Martin found his vocational calling in much the same way people today find him -- through the media, in his case a PBS special on Trappist monk Thomas Merton.

"I always say if it weren't for TV, I wouldn't be a Jesuit priest," he said.

Though raised Catholic along with his younger sister, Carolyn, Martin didn't grow up in a devout household -- he went to Mass and Sunday classes but attended public schools, while a mail-order St. Jude statue in his underwear drawer would hear his prayers.

The documentary would reroute Martin, detouring him from corporate America to the Society of Jesus a year later, exchanging a profit-driven life for one of poverty.

His path to his final vows in 2009 would resemble nothing like a straight line, but rather an example of "God's relentlessness and also his creativity," often doubling back to blend his old life with his new calling.

Martin's regency in Kenya with the Jesuit Refugee Service had him applying his Wharton/GE background to provide women in the Nairobi slums small grants to start their own businesses, an experience Martin still calls "the best job I've ever had, bar none."

And when his provincial in 1994 stalled his theological studies a year -- devastating news that almost led Martin out of the society -- he ended up at America.

Martin's post at America, where he returned as associate editor in 1999, put him on many media radars, but for some, it was his own passion for the saints that launched him into a prominent Catholic figure.

His memoir My Life With the Saints was a way to share his love of the saints with others, inviting them to revisit the unique stories of people "often thought of as almost otherworldly," Martin told NCR.

Farnham said My Life With the Saints, published by Loyola Press and selling more than 100,000 copies, showed he could communicate church teachings in an appealing way to all people, a skill noted not just within the church, but outside it as well.

"Anyone who could do a book called My Life With the Saints and make it sell like it did had something unique going," HarperOne's Tauber said.

Approaching Martin to publish his future books, the secular publishing house would allow him to extend his platform even further, a range Farnham realized when she began receiving calls and emails from around the globe asking, "Are you the Sister Janice in this book?"

"And I thought, my goodness, this book has made it all around, he really is known everywhere," she said.

Beyond the books and media appearances, Martin is still, first and foremost, a priest. He remains in the regular rotation of Masses at St. Ignatius. He hears confessions, leads retreats and offers spiritual direction.

A self-described Francophile, Martin has accompanied the Knights of Malta on several of their annual pilgrimages to Lourdes. He's even a member of the Labyrinth Theater Company, which he advised on an off-Broadway play called "The Last Days of Judas Iscariot," directed by Philip Seymour Hoffman and the subject of Martin's book A Jesuit Off-Broadway: Behind the Scenes With Faith, Doubt, Forgiveness, and More.

Fellow Jesuit and close friend Fr. George Williams said Martin's public ministry success comes from the same qualities that make him a good and holy priest: "He's a very prayerful person, he's very faithful, he's deeply spiritual, and he brings with that a sense of humor, both in ministry and in his personal life."

More than anything, he remains the same person, on- or off-screen.

"He is who he is, there's not like a public Jim Martin and a private Jim Martin. I think what you see on TV is genuine," Williams said.

"If you only knew Jim Martin through his books, and then you met Jim Martin, you would say, 'Yeah, this is Jim Martin.' You wouldn't say, 'I can't believe this is the guy that wrote those books,' " Modrys said.

Farnham, too, sees a single Jim Martin, and counts herself among Martin's "800 close friends." She is eager to share that Martin still calls his mother every day and brings her to his public appearances, including the Fordham event. And each Lent, Martin calls his college friends, who continue a tradition of deciding what he'll give up each year.