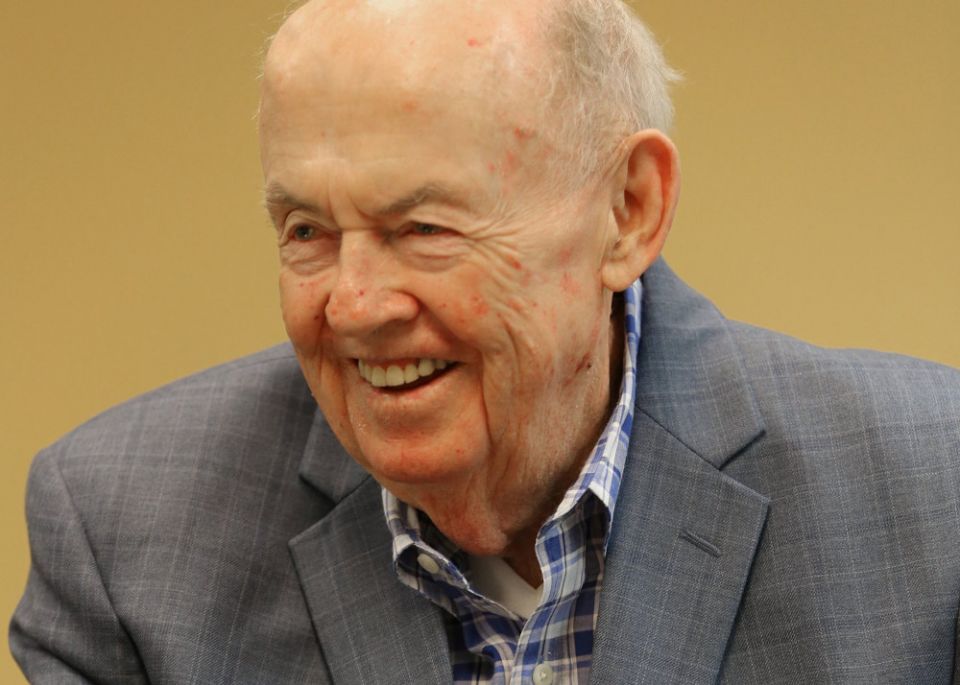 Washington — John Sweeney, who led the AFL-CIO for 14 years from 1995 to 2009, and headed one of the nation's largest unions, the Service Employees International Union, for 15 years before that, died Feb. 1 at age 86 at his home in the Washington suburb of Bethesda, Maryland. No cause was given.

Sweeney, both of whose parents were immigrants from Ireland, went to Catholic schools in New York City, and worked his way through Iona College in the New York City suburb of New Rochelle with a union job.

Throughout nearly three decades as one of the United States' most important labor leaders, Sweeney stressed organizing unrepresented workers as the key to revitalizing the labor movement. He also advocated greater solidarity with immigrants to the United States, just as his parents had been three generations before.

"He was guided into unionism by his Catholic faith, and not a single day passed by when he didn't put the needs of working people first," said Sweeney's successor as AFL-CIO, Richard Trumka, himself a Catholic, in a statement posted Feb. 1 on the AFL-CIO website. "John viewed his leadership as a spiritual calling, a divine act of solidarity in a world plagued by distance and division."

Throughout the 1990s, Sweeney was a full member of the U.S. bishops' Committee on Domestic Policy before a 2000 reorganization of the bishops' canonical structure no longer permitted laypeople to serve as committee members but only as advisers or consultants.

The late Msgr. George Higgins, long regarded as the 20th century's preeminent "labor priest," said in a 1994 interview that Sweeney was taking the union movement in the right direction.

"I would say the one union that's doing it perhaps more effectively than others, because it comes within their jurisdiction, is the Service Employees International Union. John Sweeney is the president. Many of their members are women and very poor immigrants," Msgr. Higgins said.

The year before, Sweeney was one of eight labor leaders who joined with eight bishops for an ongoing Catholic-labor dialogue. Another labor participant was Tom Donahue, AFL-CIO vice president at the time, who lost to Sweeney in 1995 in the first-ever contested election for the AFL-CIO presidency. Like Sweeney, Donahue was an Irish Catholic from New York.

Sweeney lauded immigrant workers who came in a "freedom ride" to Washington from 10 different cities across the country in 2003 in hopes of persuading members of Congress to take up their cause.

"Never before in the history of our nation have immigrant workers done what you are doing today," Sweeney told them at a rally. "Our nation must not turn a blind eye to the unjust and inhumane treatment of immigrant workers in this nation."

In 2006, Sweeney did his own "poverty tour" with Ethel Kennedy, the widow of Robert F. Kennedy, in RFK's memory, starting in Immokalee, Florida. The day culminated in an outdoor Mass. Before the Mass, Sweeney and Kennedy publicly signed letters asking McDonald's to help increase tomato farmworker wages by paying a penny a pound more for the tomatoes they purchase, to be passed on to the workers who pick the tomatoes. Eventually, McDonald's did.

Sweeney was among those consulted on a 2009 document that took two years to prepare: "Respecting the Just Rights of Workers: Guidance and Options for Catholic Health Care and Unions."

Issued by leaders from Catholic health care, the labor movement and the U.S. bishops' conference, the document was a set of principles designed to ensure a fair process as health care workers decide whether to join a union.

During his AFL-CIO leadership, Sweeney spoke on themes that still resonate today.

"Eighty percent of the uninsured either have jobs or have parents or spouses with jobs," Sweeney said at a 2002 forum. "We are talking about 32 million people in working families that do not have health insurance. They work hard every day, but the system squeezed them out."

"We need to rewrite the rules for global economy," he told students at the opening talk of the 2002 Bellarmine Forum at Loyola Marymount University in Los Angeles. "The push for free-market globalization started more than 30 years ago and has continued to undermine our economy and our living standards for working families," he said.

Sweeney told the leaders of 28 trade unions from throughout the world meeting in 1995 at the Vatican that too many companies are "taking the low road" by promoting use of cheap labor in countries where working people have low wages and no rights.

As technology has advanced and the economy has become globalized, there has been at the same time "a collapse of social solidarity, not only between the wealthiest and poorest countries but within the wealthiest societies themselves," Sweeney said. "In the United States, the globalization of the economy has gone hand-in-hand with the stagnation of living standards for working families."