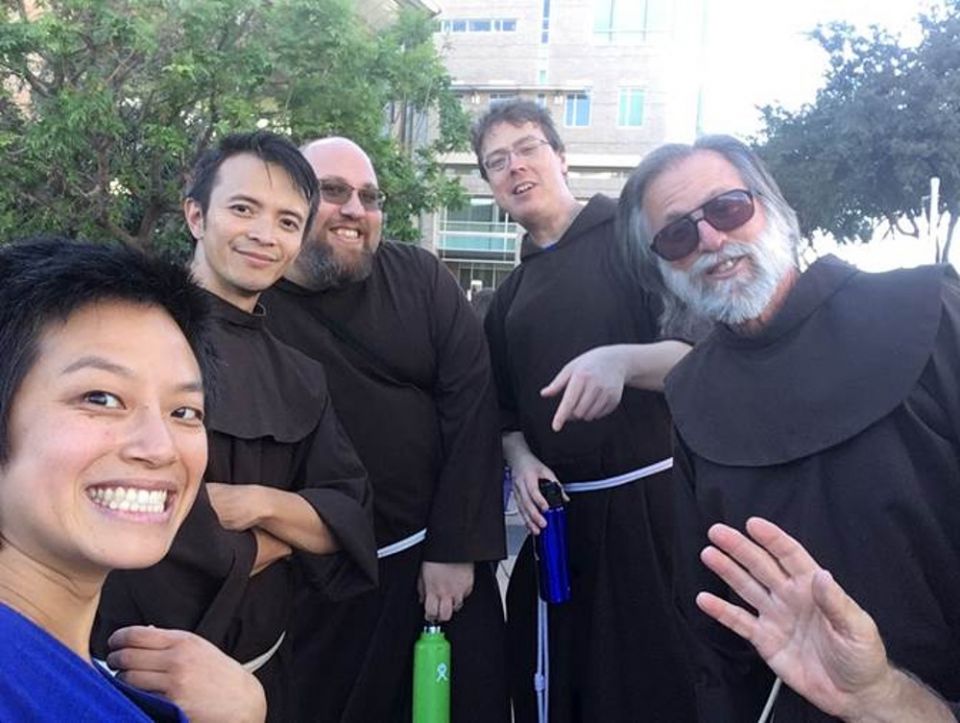 Marcia Lee attends a School of the Americas Watch event with Franciscans, including Capuchins. (Courtesy of Marcia Lee)

There is no such thing as a typical day's work for people who coordinate the justice, peace and ecology ministries of male religious orders.

"It is difficult to create a 'day in the life,' because our work is directly impacted by what is happening in the world," said Marcia Lee, director of the Office of Justice, Peace and Integrity of Creation for the Capuchin Franciscan Province of St. Joseph. "Our work happens at the intersection of our Franciscan spirituality with reading and responding to the signs of our times."

"That's one of the many reasons why I love this position," said Brian Reavey, a lay Marianist who serves as director of justice, peace and integrity of creation for the Marianist Province of the United States. "It is different every day."

On a given day, justice and peace directors might be preparing workshops, meetings or materials to aid in the formation and education of male religious or the broader community; facilitating communication within the order; partnering with outside groups to promote a particular cause; or voicing the order's concerns and perspectives to the U.S. government.

What stays consistent is their efforts to ensure that religious orders are able to concretely carry out their mission to promote justice, peace and care of creation.

When he spoke with NCR in early January, Reavey was planning annual meetings or retreats for three different groups affiliated with the Marianists.

Another upcoming project was using a Conference of Major Superiors of Men resolution on peace and non-violence to develop programs and activities tailored to specific populations within the province, such as prayer and "armchair activism" opportunities for the approximately 100 brothers who are infirm.

Working with a variety of groups is typical for Reavey, who said a major part of his job entails "pulling people together." He serves and supports about 300 Marianist brothers, 19 schools, three universities, four retreat centers and six parishes. He also partners with outside organizations.

Reavey's work is rooted in the Marianist mission, which he said has justice and peace work — with a focus on education, the poor and youth — at its heart. "We really want to make systemic change on every level of society where there is injustice," he said. 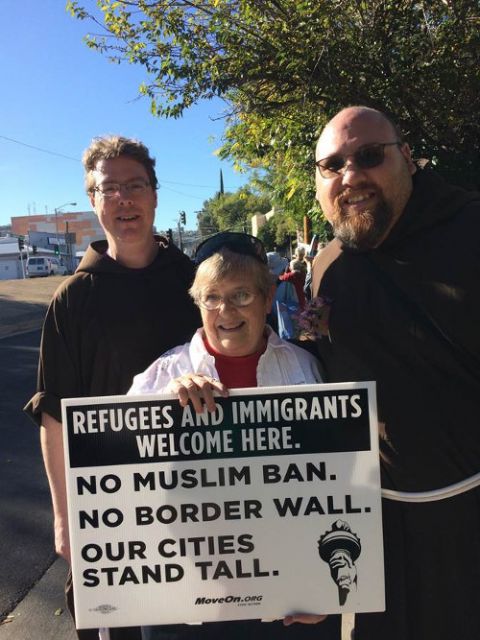 Two Capuchin brothers, along with a sister, attend a School of the Americas Watch Border Encuentro. (Courtesy of Marcia Lee)

Kristin Lionetti, policy director of the Office of Justice and Ecology for the Jesuit Conference of the United States and Canada, also described her work as promoting the mission of the order she serves, particularly its commitment to the principles of Catholic social teaching.

Jesuit Fr. Jean Denis Saint-Félix heads the office, focusing on aligning the North American Jesuits' priorities with those of Jesuits around the world, while Lionetti leads the office's advocacy efforts, personally focusing on migration and human rights in Central America. In her work, Lionetti receives a lot of information from universities, parishes and other partners about their concerns while also tracking information from the U.S. government.

Lionetti's office then serves as a voice for the order by using this information, and the Jesuit perspective on it, to inform its advocacy with Congress and the administration. The office also educates lay organizations and Jesuit institutions to help them become involved in advocacy.

Sharing information is also an important part of Lee's work for the Capuchins. When she spoke with NCR in early January, Lee's current projects included helping the friars work out the details of doing energy audits on all their buildings, learning from and taking action with immigrant communities, and reducing meat consumption.

At others times, she makes sure the friars know what others in their province are doing and leads days of recollection, trainings for postulants or various workshops for the friars or their ministries.

While she sometimes has difficulty getting friars involved in a particular project, Lee said the friars are "not all of the same mind, but they are all of the same spirit."

She added that sometimes the friars "don't realize what they're doing is justice and peace work." For those that don't already connect service and justice, such as feeding the hungry while addressing the root causes of hunger, "making the connections is just really powerful, and then the work that they do really transforms."

Another challenge in Lee's work stems from her desire to live up to what she invites others to do.

Lionetti and Reavey experience different challenges in their work.

"The hardest part is hearing such heavy concerns about the real impacts of injustices on people's lives, being witness to those injustices, and the frustration at the pace of change on some of these concerns," said Lionetti.

She added that her favorite part of the work was having the opportunity to respond to those challenges alongside partners who "inspire and invite others into greater solidarity and inspire a vision of … a more just and whole world."

"Our work happens at the intersection of our Franciscan spirituality ... responding to the signs of our times."

Reavey found the sheer diversity of issues he could be working on difficult, especially when trying to build energy for a new project among people who are already busy with peace and justice work.

"There are just so many issues to get involved with," he added. "And it's that rut we can get stuck in, like paralysis by analysis, just feeling overwhelmed with so many issues."

Reavey's favorite part of his job was also related to diversity; he said he enjoyed working on a variety of tasks with lay and religious, in different sectors of society and with various ministries, including both wealthy and low-income Marianist schools and ministries in Africa and India.

"I think my favorite part of my job is … when I see the transformation in people when they get excited about really being neighbors with all of creation and the rest of humanity," Lee said.