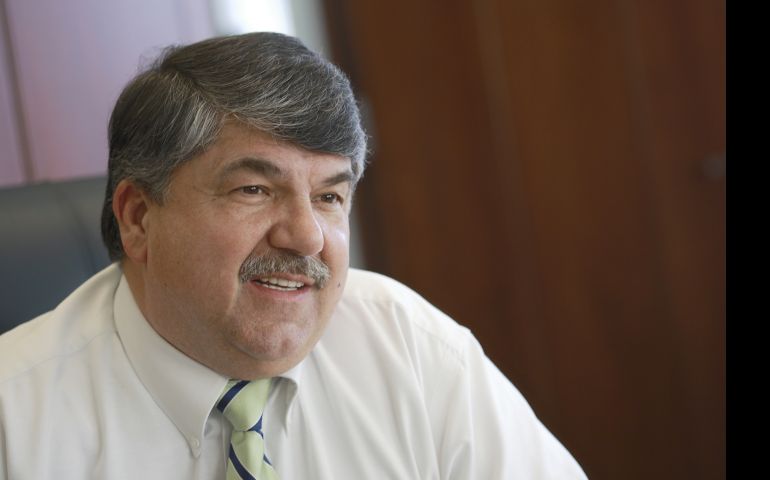 Richard Trumka in his office at the AFL-CIO headquarters in March 2010 in Washington. (CNS/Nancy Wiechec)

Richard Trumka breaks into a smile that would light up a mine shaft. “Just talking about him makes my heart swell up,” says the president of the AFL-CIO, whose office overlooks the White House. “It makes me feel good because it’s like hope. He’s given people hope who have been without hope for so long.”

The alliance between labor and religion, particularly the Catholic church, is nothing new. From the promulgation of Pope Leo XIII’s encyclical Rerum Novarum in 1891 to Francis’ Evangelii Gaudium, popes have written and spoken in uncompromising terms when making the case for the rights of workers to organize, to advance and protect their own interests, to be justly compensated, and to have humane and safe working conditions.

The alliance had grown frayed in recent decades, but of late, the two sides have shown signs of reconnecting and finding new possibilities for working together. A year ago, Trumka attended a workshop, “Erroneous Autonomy: The Catholic Case Against Libertarianism,” organized by The Catholic University of America’s Institute for Policy Research and Catholic Studies. He introduced Cardinal Oscar Rodriguez Maradiaga, archbishop of Tegucigalpa, Honduras, and chairman of the pope’s Council of Cardinals. The respondent to the Rodriguez address was then Bishop Blase Cupich of Spokane, Wash., since appointed archbishop of Chicago.

On Monday, a second conference organized by the institute on the same theme, “Erroneous Autonomy: A Conversation on Faith & Solidarity,” will be held at the headquarters of the AFL-CIO, the largest organization of labor unions in the country. The keynote address will be given by Cardinal Donald Wuerl, archbishop of Washington. The respondent to Wuerl’s talk will be Fr. Clete Kiley, a priest of Chicago and director for immigration policy for UNITE HERE, a union for hotel and restaurant workers.

Kiley, one of the few priests at the national level to step into the work once done by Msgr. George Higgins, the country’s last high-profile “labor priest,” founded the Priest-Labor Initiative in 2012. The initiative has since grown into a network of labor priests across the country with a mission to “stand with and advocate for workers, especially immigrant workers, according to the principles of Catholic social teaching.”

In April 2014, Trumka and Kiley wrote an opinion piece that appeared in the Courier-Journal of Louisville, Ky., “A Catholic push for a higher wage,” arguing that Catholic and labor traditions align and that raising wages of struggling workers “is a moral imperative.”

And last week, a group of about 20 U.S. community organizers and union leaders held meetings with Vatican officials in an effort to influence the papal message when Francis visits the U.S. in September.

“I think we’re going back to the future,” said Trumka, a Catholic who recalls that in the small mining town of Nemacolin in western Pennsylvania where he grew up, “the two entities that stood for working people were the Catholic church and the United Mine Workers union. They were intertwined, inseparable.”

Trumka keeps some of that western Pennsylvania past around him, including the safety lamps both he and his father before him used in the coal mines. (Trumka worked in the mines before finishing college and earning a law degree at Villanova University.) He shows a visitor the little metal tags with numbers, his and his father’s, that miners would hang up on different boards entering and leaving the mines to keep track of who was in and who was out.

If the church went “tepid,” as Trumka said, on labor and justice issues, labor itself went into a shell. “We sort of got insulated. When they started attacking labor, we sort of hunkered down and were just looking at ourselves, trying to hold on.” Those attacks, he said, took on a new order of magnitude during the administration of Ronald Reagan, who famously fired striking air traffic controllers, who were forbidden by law from striking, and gave union-busting the blessing of the White House.

Unions, Trumka said, were no longer “speaking for everybody out there. And we found out that that was a very bad strategy. So a couple of years ago, we looked at ourselves very critically. We called in all of our friends and our allies and said, ‘Look, we have to do things differently.’ ”

The result of the consultations was renewed outreach to the community, he said.

That “community” has changed considerably since the days when, for instance, Pennsylvania’s gritty cities were jammed with heavy industry that subsisted on unionized labor and consequently helped build an enormously successful middle class.

Nemacolin is a good example of what’s happened. The coal mine closed in the mid-1980s. Google the name of the town today, and the names of resorts, golf courses and the Lady Luck Casino top the list. And if it is anything like the rest of the country, the people who staff the restaurants and hotels are among the working poor and dominated by immigrants, documented and undocumented.

Labor, Trumka said, has changed its tactics. “It’s really exciting because what you’re seeing on the ground is all of these different entities starting to have activity.” The labor movement, he said, isn’t working just for those who are organized, but for all people on the margins, “whether it’s the fight for $15 [per hour minimum wage] or car wash workers, whether it’s taxi cab drivers or immigrants coming together.

“People are beginning to stand up and say, ‘This economy isn’t working, and we need to come together.’ So we started going back to our roots, going back to the community.” When organized labor, whose numbers have dropped precipitously over the past three decades, was at its peak, “we were part of the community, and the community was part of us, and we were inseparable.”

He said he believes that wages, labor conditions and income inequality will become an issue in the upcoming presidential election cycle, but that it will be an even more dominant theme in the following cycle.

“The difference I see now from five years ago,” he said, “is that five years ago, people bought into the notion that the economy was like the weather: There was nothing you could do about it. Too bad, you’re stuck with it. And now they don’t. They understand that the economy is not the best set of rules. Those rules are set by men and women we elect; those rules decide the winners and the losers, and we can change those rules.”

He said the pope’s visit in September will make it all the easier to understand the connection. “Oh, God, I think it’s going to energize people. When the pope talks about work being a gift and a duty, they sit up and they smile, and they feel proud again.”

[Tom Roberts is NCR editor at large. His email address is troberts@ncronline.org. Follow him on Twitter: @NCRTROB.]