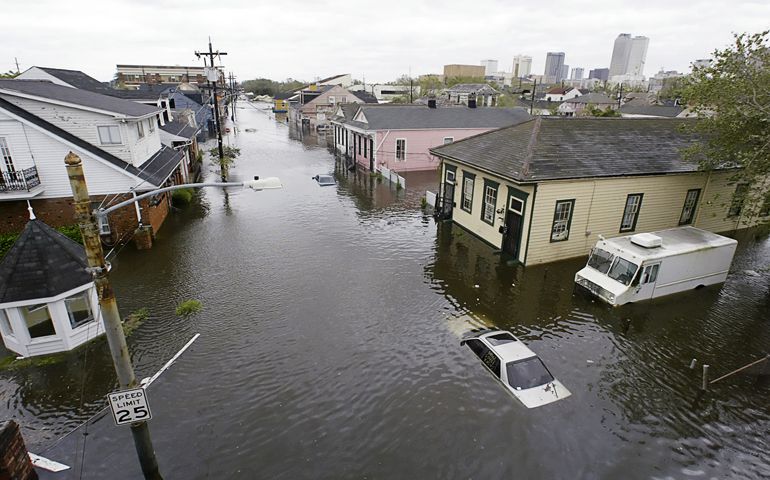 There was panic in the streets of New Orleans on Sunday, Aug. 28, 2005. Some 1,800 cars an hour were trying to flee the city as Hurricane Katrina approached with sustained winds of more than 175 miles an hour, its swirling circulation filling the entire Gulf of Mexico.

The mayor had issued the first mandatory evacuation in the city's history.

Msgr. Ignatius Roppolo -- then 77 and retired from active ministry -- had to make a fateful choice: to evacuate to a Benedictine monastery far north of the city or remain in New Orleans at the Lindy Boggs Medical Center, where he had been a chaplain. He chose to stay, to be with those in need.

"It's what he did. Who he was," said St. Joseph Sr. Helen Prejean, a longtime friend who knew him long before she started her ministry to death row inmates.

The sunny skies that Sunday didn't last long. Rain started falling, and the winds soon picked up and began to howl. That night, Roppolo got little sleep. He visited and calmed patients, some on ventilators, respirators and other life-support equipment.

Before dawn Monday, Katrina made landfall. The eye of the storm passed just east of the city, which sits below sea level, protected by a system of levees. Just when it seemed the city had dodged the bullet, the levees broke in three locations and the waters of Lake Pontchartrain would soon flood nearly 80 percent of the city.

It took Roppolo months before he could talk about what happened that week at Lindy Boggs Medical Center, formerly Mercy Hospital, an acute care facility. His story has never been told in print, partly because he avoided the limelight, partly because he said he was "numb for months afterward."

First, he remembered the electricity going out. Backup generators provided emergency power, but not for long. The flooding began in earnest. From the windows, one could see the water rising. First to the fenders of cars, then to the windshields, and soon ,the vehicles were swallowed whole and not seen at all.

More than 100 patients and their families were at the hospital, but the number of people kept rising as neighborhood residents sought refuge from the floodwaters.

When the water rose in the basement, the emergency generators there were rendered useless. Elevators and medical equipment didn't work -- ventilators, dialysis machines, respirators. To make matters worse, the morgue, pharmacy and kitchen were also located in the basement.

And, of course, there was no air conditioning, which sent daytime temperatures shooting up over 105 degrees.

"It was hot, dark, eerie," Roppolo said, and panic had set in. "Patients were frightened, crying. I prayed with them, listened to their stories, their fears."

"The phones stopped working, so we were cut off from the outside. We felt isolated," he said. Gunshots could be heard in the night. A battery-operated radio, which soon died, brought ominous reports that martial law had been declared, looting was rampant, and the floodwaters were continuing to rise.

By Tuesday, Roppolo said, the stench in the hospital was abominable. The toilets wouldn't flush, and some bodies had begun to decay. People were tense, getting desperate.

Helicopters could be seen, but none landed near the hospital. From the rooftop, he could see people in the neighborhood on their rooftops hoping to be rescued.

"Doctors were meeting several times a day and discussing how to care for patients, how to evacuate them," he said. "The whole staff was dedicated, very concerned with the patients even though they didn't know if their own families were OK."

On Wednesday, the flooding reached its peak, with some houses in the city under 20 feet of water. Rescue workers finally arrived, but soon triggered a crisis about who would be taken out first.

"We thought they would take the most critical first," Roppolo said. But that didn't happen. They took the patients who could walk first, and then the wheelchair-bound.

By evening, some 400 people had been evacuated, but not the 20 most critical.

"They were left to die," Dr. James Riopelle, an anesthesiologist, told NCR.

The doctor, Roppolo and two health care workers refused to leave the patients despite repeated orders from the authorities.

"Largely because of Fr. Roppolo, we were able to save most of the 20," Riopelle said.

"Fr. Roppolo was incredible. He was calm, saying prayers with the patients, but he also did hard physical work from the crack of dawn to nightfall, changing diapers, changing sheets, lifting patients up to give them water. And they were very heavy.

"It was about 110 degrees, a furnace, but he never flagged. Nothing stopped him. He never complained. Never acted like he was tired. If you talk about a godsend, he was one."

The priest thought the same about Riopelle, praising him as a "wonderful and amazing" doctor.

Rescuers finally came for the critical patients, and on Friday, Roppolo was helicoptered out with the last patient, a 90-year-old Jesuit priest, Robert Anderson. Unknown to authorities, Roppolo had smuggled a cat on board in a sack, one of the many animals stranded at the hospital.

[Linda Cooper and James Hodge are the authors of Disturbing the Peace: The Story of Father Roy Bourgeois and the Movement to Close the School of Americas.]