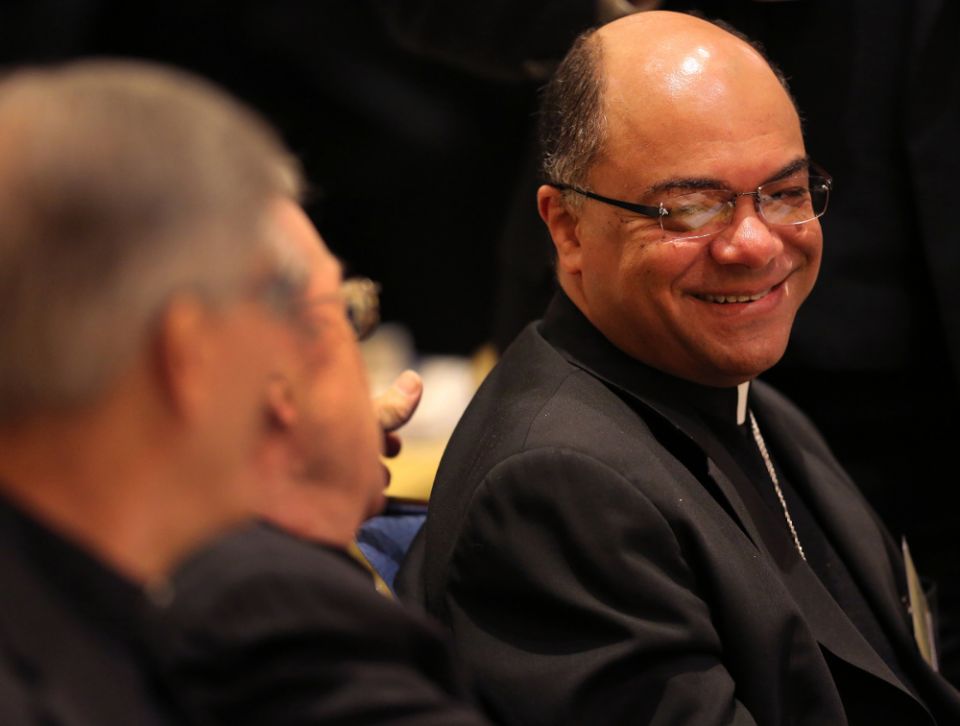 Bishop Shelton Fabre of Houma-Thibodaux, La., is seen in Baltimore in this 2014 file photo. The newly appointed chair of the Ad Hoc Committee Against Racism for the U.S. Conference of Catholic Bishops said he looks forward to serving the bishops in this role as Catholic church leaders continue to respond to the "sin" of racism. (CNS/Bob Roller)

Washington — Bishop Shelton Fabre of Houma-Thibodaux, Louisiana, the newly appointed chair of the Ad Hoc Committee Against Racism for the U.S. Conference of Catholic Bishops, said he looks forward to serving the bishops in this role as Catholic church leaders continue to respond to the "sin" of racism.

The bishop was appointed to the position by Cardinal Daniel DiNardo of Galveston-Houston, USCCB president, following the resignation of Bishop George Murry of Youngstown, Ohio, from this role after his recent diagnosis with a form of acute leukemia.

"Our most heartfelt prayers are with Bishop Murry and his loved ones," the cardinal said in a May 4 statement. "We ask all people of faith to join us in praying for his full recovery."

Fabre, an African-American bishop, who is also chairman of the Subcommittee on African-American Affairs for the U.S. bishops, said the work of the Ad Hoc Committee Against Racism will continue to build on the direction set by Murry with a primary focus on continuing regional listening sessions.

He said Murry "insisted we need to act but also to listen to those affected by racism and those working to overcome it."

In a talk he gave earlier this year, Murry described the committee's listening sessions — taking place in parishes, schools, seminaries, Catholic Charities organizations, Catholic health associations and social service agencies across the country — as part of a "national conversation on race."

"The goal will be to allow people to listen to each other, to exchange ideas, to become educated and change hearts," he said, emphasizing that these sessions would involve listening closely to people who have experienced prejudice firsthand: African-Americans, Latinos, immigrants, Jews and others.

The bishops' Ad Hoc Committee Against Racism was formed in August 2017 not only to address racism in the Catholic Church and the wider community but also to be part of the solution in eliminating it.

Fabre told Catholic News Service May 3 that the committee is currently working on completing a pastoral letter on racism that is scheduled for consideration at the bishops' annual fall assembly in Baltimore. It is also developing programs for Catholic schools and religious education programs and meeting with scholars to deepen its analysis of racism and come up with the "best ways to move forward."

The 54-year-old bishop stressed that racism goes far beyond the Catholic Church and will take "many voices, many encounters ... to effectively address and eradicate it," but he also has hope that this can happen saying he believes in the goodness of people and in God's power.

"Racism is a sin with a long legacy and deep roots," he said. "It requires the grace of God to overcome it."

He will serve as chair of the committee for the remainder of Murry's term. Murry is undergoing chemotherapy throughout the month of May, the Youngstown Diocese announced April 30.

Fabre said he is praying for Murry's full recovery. "My prayers and hopes are with him," he said.

Previewing the USCCB meeting: Will there be a new direction?