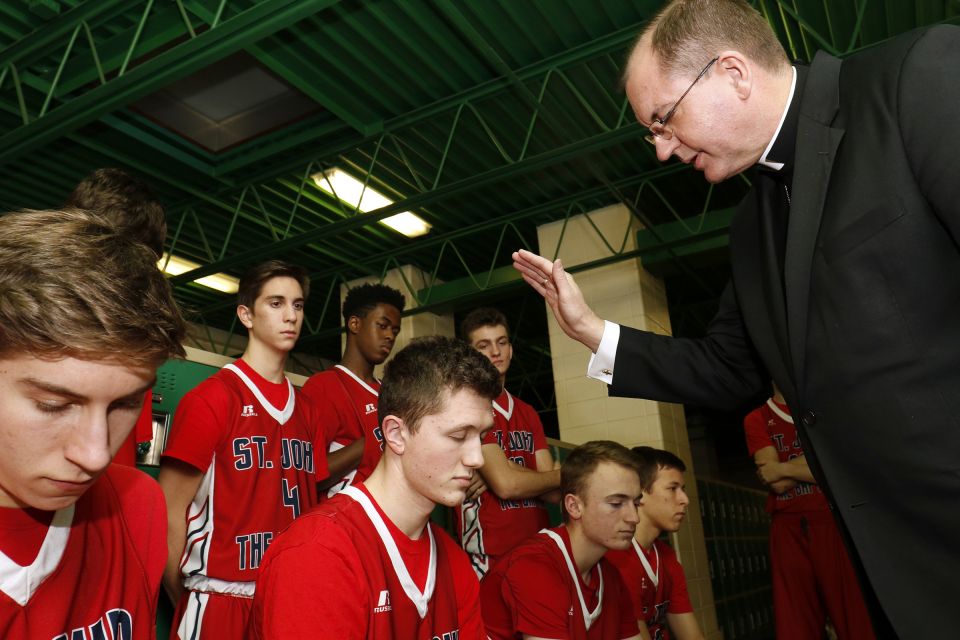 Riverhead, New York — When Bishop John O. Barres of the Diocese of Rockville Centre, New York, announced March 12 the closing of Bishop McGann Mercy High School in Riverhead, Long Island, by the end of this school year, it sounded like the end of the road for the school.

The diocese has subsidized the school with $16.3 million since 2007, and declining enrollment made it impossible to continue, Barres said at the time. The statement was released via the diocese's website and television station. Bishop McGann Mercy students, faculty and administrators expressed surprise at the timing, saying they were in the dark about the dire straits of their school.

Tracy Kappenberg said a meeting with Barres in April indicated that Barres is open to new ideas. "He agreed if we can come up with a plan," she said.

Bob Terry, another Bishop McGann Mercy supporter, said the ad hoc committee is soliciting ideas, including having the school run by an independent board and administered by a religious community. They are also exploring innovative Catholic high school models around the country, including the Jesuit Cristo Rey schools, in which students pay for their tuition in part by working for local companies. That model has been exclusively used for urban Catholic schools, and has yet to be tried in a suburban/rural setting such as Long Island's East End.

"We understand how the bishop came to his decision. The school was not sustainable in the current model," Terry told NCR.

Geographic and demographic realities are obstacles. Long Island's East End, a narrow strip of rural and resort towns, including the Hamptons, have been filled in recent years with home buyers from New York City gobbling up second-home properties. Rarely do such buyers have children of school age who reside year-round. The numbers of eligible school children has declined, affecting both Catholic school and public school enrollments.

The committee working on new ideas said that the current school enrollment, now 360 for grades seven through 12, will have to be increased to more than 400 students for grades nine through 12. The diocese will continue to support Catholic junior high school education in the region, on a different site than the current high school.

Long Island traffic congestion is another obstacle. The nearest Catholic high school will now be St. John the Baptist, a diocesan high school in West Islip, more than 35 miles westward. The narrow traffic patterns of Long Island make that a long commute, even though the diocese has offered transportation to Bishop McGann Mercy students who want to transfer.

"We are okay with where we are with the bishop right now. He says his door is open," he said.

There were 1,221 Catholic high schools in the U.S. at the turn of the century. There are currently 1,194, with a 12 percent decline in student population over the past decade.

Catholic high schools maintain their popularity, said McDonald, as they are able to access alumni funding more easily than elementary schools. Parents still maintain an interest, even with increased tuition costs, as Catholic schools are often seen as better alternatives for the volatile teenage years as well as providing a better chance at college entrance and scholarships than public schools in many areas.

Catholic high schools also draw students from a wider area. "Economies of scale make it easier to operate," said McDonald. She said that a greater emphasis is being placed nationally on attracting a new generation of Latino students. The challenge in attracting them are tuition costs and a widespread belief in Latin America that Catholic school education is only for elites.

People | On Long Island, an attempt to save a Catholic high school from closing