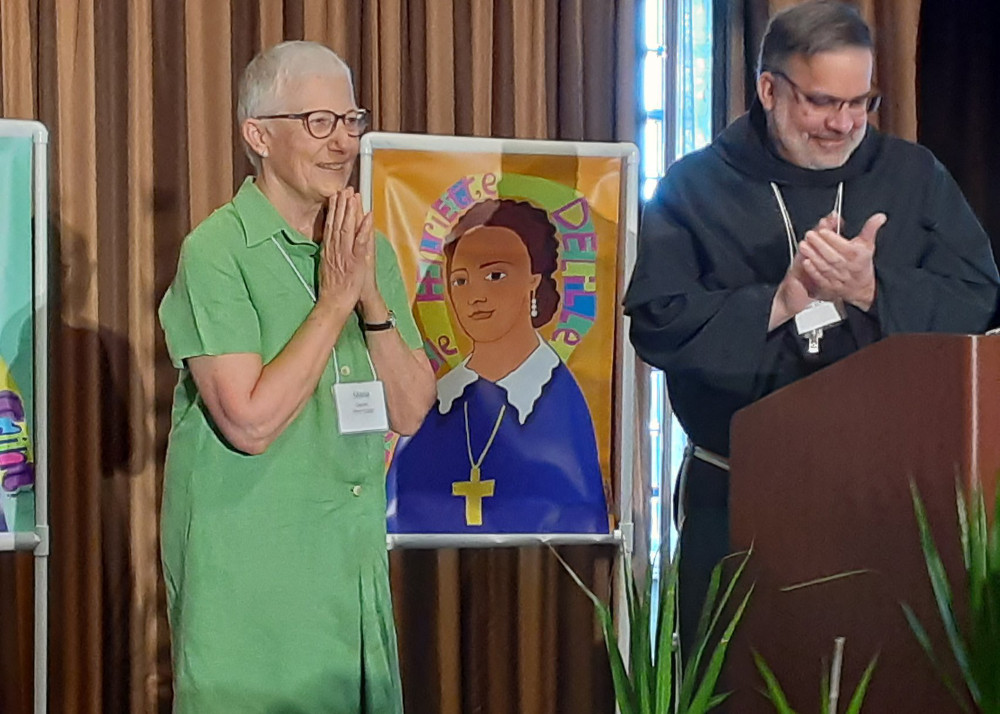 For more than 50 years, Marie Dennis has been asking herself as a white middle-class woman who once worked for the U.S. Navy how she could respond as a Catholic to the cries for justice of people around the world.

It's not an easy question to explore, she admitted to Catholic News Service Aug. 6 on the eve of receiving Pax Christi USA's Teacher of Peace Award during the organizations' 50th anniversary conference.

She realizes even today as program director of the Catholic Nonviolence Initiative, her latest stop on her journey, that this requires listening to and, just as importantly, learning from the people who are struggling to overcome racism, poverty, war or environmental degradation.

The teaching began with herself and with her six children.

"To me, that was the most important education that I did," said Dennis, a trained physicist who worked on the development of nuclear-powered submarines. "It wasn't information. It was how do you live Christianity. It was how do you do that consistently with my kids."

Dennis recalled how she was particularly inspired by the document "Justice in the World," which emerged from the 1971 Synod of Bishops, addressing the issue of justice and liberation of poor and oppressed people.

She also repeatedly read A Theology of Liberation: History, Politics and Salvation by Dominican Fr. Gustavo Gutierrez, a Peruvian theologian. The book addressed how religious faith could be applied to aid poor and oppressed people through involvement in political and civic affairs.

Realizing that injustice could be addressed by "educating through experience," Dennis helped co-found the ecumenical Center for New Creation, which brought "controversial critical issues" to middle class congregations for examination through the lens of faith.

Her desire to learn from new perspectives led Dennis to move her six children from a comfortable Virginia suburb outside of Washington to a farm in the northern part of the state. But even that move, she realized, was a sign of privilege. Poor and marginalized people, she understood, cannot move to a new place that is safer, where food is easier to obtain and that the impact of climate change is less severe.

In 1989, Dennis joined Maryknoll, first with the Maryknoll Society when the missionary order reestablished a public policy office in Washington. In 1997 she was named director of the Maryknoll Office for Global Concerns, a position she held for 15 years.

Meanwhile, Dennis became co-president of Pax Christi International, the Brussels-based Catholic peace organization formed from the ruins of World War II. She served with Bishop Kevin Dowling of Rustenburg, South Africa, traveling the world to learn from people living on the margins.

With both organizations, Dennis focused on educating policymakers about how their decisions affected people barely eked out an existence or faced violence from battling militias, corporate exploitation and a lack of basic necessities.

"(The work) was how do we do the same thing in bringing policymakers to have a different experience than what they have when they think about broader issues," she told CNS.

Dennis also began exploring Christian nonviolence during this time. She realized that the challenges that unprivileged people face around the world are forms of violence. It led her to become part of the fledgling Catholic Nonviolence Initiative which was introduced in 2016 following a Vatican conference.

"It's been really since 9/11 and the Iraq war when it just became clearer and clearer to me that the context of violence, whether it's racism or economic injustice or food insecurity or environmental injustice, it's all violence," Dennis said. "Then that began to help me learn what is nonviolence and how does that connect with the Gospel."

During the award presentation Aug. 7, the final day of the three-day conference, Dennis told the 325 attendees and an online audience that Pax Christi's USA growing engagement with "intersecting violences" is leading to a new chapter for the half-century-old organization as it commits itself to Gospel nonviolence.

She described nonviolence as "more than pacifism," calling it "a spirituality, a way of life."

"It is a potentially universal ethic that could guide the world, including in times of crisis, toward peace rather than justified war, toward respect and inclusion rather than exploitation. And it is a proven, effective approach to deep peace seen through the prism of justice," she said.

Practicing nonviolence "is not just not violent but is muscular and actively engaged in preventing or interrupting the violence that is embedded in our culture, by the way we relate to each other, by the way too many in our society who have been and still are bruised, broken, killed by 'the system' and by the way we humans treat the earth," Dennis said.

"And it is a nonviolence that energetically promotes just peace, the new story, the beloved community, the new creation," she said.

Crediting Pope Francis for his "vision, creativity and commitment to the cry of the earth and the cry of those forced to live on the margins of our world," Dennis said she sees a "paradigm shift" that finds "a leaning toward nonviolence in Catholic social thought that is being enhanced by the synodal process" the church is undergoing.

She welcomed the interest from the pope and other Vatican officials in the work of Catholic Nonviolence Initiative, but cautioned conference attendees that much work remains ahead.

"To reclaim the centrality of Gospel nonviolence would require a radical transformation of the internal life of the Catholic Church, as well as the public face, voice and engagement of the institution," Dennis said.

She also warned that the shift to nonviolence is getting pushback by "ferocious and powerful" forces and called on Pax Christ USA members and the church to not back away.

"Our work is not done and I am afraid it won't be for a long time," she said.