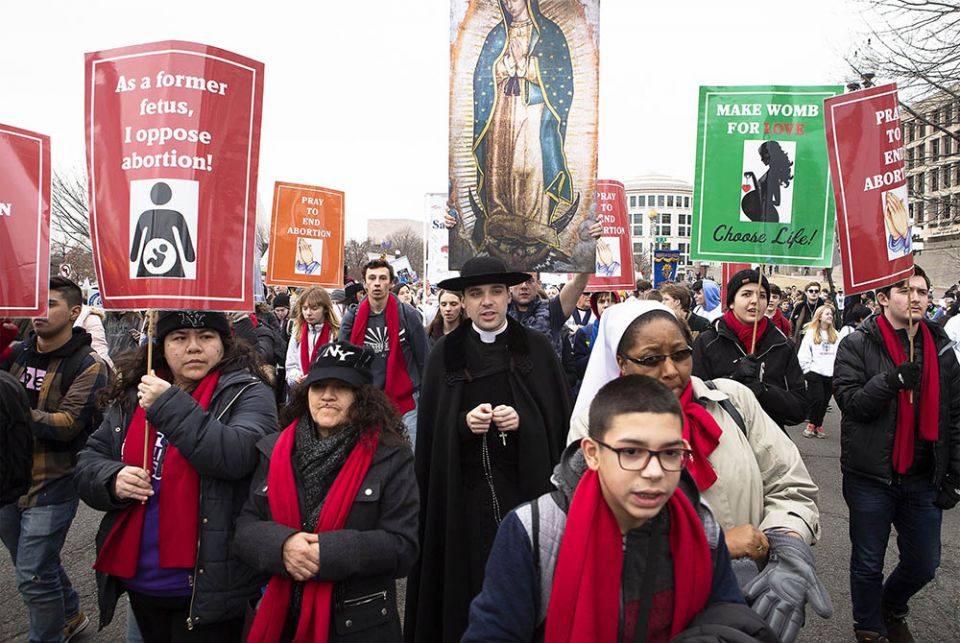 People walk up Constitution Avenue headed toward the U.S. Supreme Court while participating in the 47th annual March for Life Jan. 24, 2020, in Washington. The 2021 March for Life in Washington will be held virtually because of the coronavirus pandemic and ongoing political unrest in the nation's capital. (CNS/Tyler Orsburn)

What a difference a year makes.

One year after Donald Trump became the first U.S. president to speak in person at the March for Life in Washington, the event has gone virtual because of concerns about the pandemic and safety.

"The protection of all those who participate in the annual March, as well as the many law enforcement personnel and others who work tirelessly each year to ensure a safe and peaceful event, is a top priority of the March for Life," Jeanne Mancini, president of March for Life, said in a statement on Jan. 15 announcing that the march will be virtual.

"In light of the fact that we are in the midst of a pandemic which may be peaking, and in view of the heightened pressures that law enforcement officers and others are currently facing in and around the Capitol, this year's March for Life will look different," she added.

The march, which is scheduled for Jan. 29, will consist of a handful of pro-life leaders gathering to march. The event will be livestreamed. 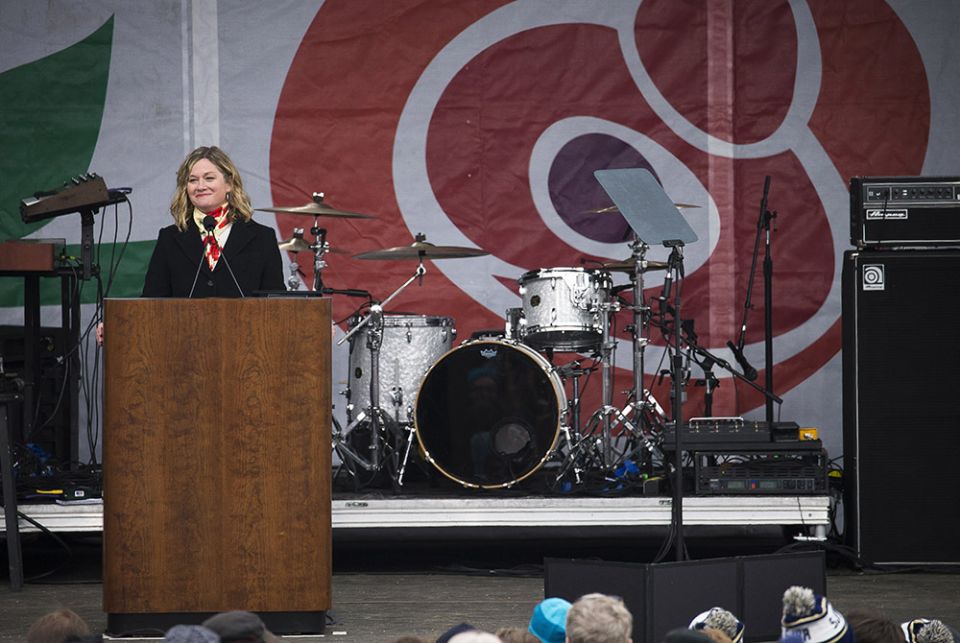 Jeanne Mancini, president of March for Life, speaks Jan. 18, 2019, during the annual March for Life rally in Washington. (CNS/Tyler Orsburn)

The March for Life is held each year on or close to the anniversary of the U.S. Supreme Court's decision in 1973 in Roe v. Wade that made abortion legal across the country. Usually, tens of thousands participate in the march.

The move for the march to go virtual was supported by Archbishop Joseph Naumann of Kansas City, Kansas, chairman of the U.S. Conference of Catholic Bishops' Committee on Pro-Life Activities. 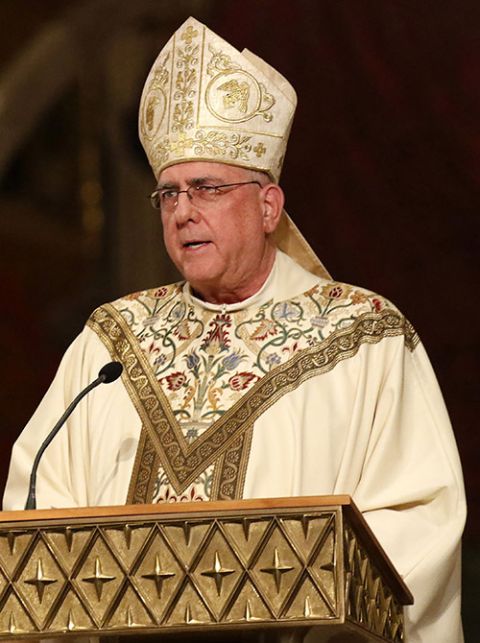 "As long-time participants in the annual March for Life, my brother bishops and I commend the march organizers for their concern for the lives and safety of all participants. The countless, peaceful, pro-life marchers who would normally gather each year should not be put at risk. Peaceful prayer and witness must and will continue this year — just in a different format," Naumann said in a Jan. 19 statement.

He asked Catholics to join in a nationwide novena from Jan. 21-29, a series of prayers, holy hours, Masses and rosaries intended for "the protection of human life," the archbishop said.

Even before the announcement that the March for Life would be virtual, pro-life Catholics were changing their plans. The National Prayer Vigil for Life, which is always held on the evening before the march at the Basilica of the National Shrine of the Immaculate Conception in Washington, was going to be virtual.

Dioceses were making adjustments. The Diocese of Allentown, Pennsylvania, for example, had already planned for Bishop Alfred Schlert to host a "Holy Hour for Life" the night before the march that would be livestreamed, and for Catholic schools in the diocese to tune into the March for Life online. The diocese wasn't going to sponsor buses to go to Washington this year, diocesan spokesman Paul Wirth said.

Meanwhile, Kristen Day, executive director of Democrats for Life of America, said her organization had already scheduled a virtual breakfast on the morning of the march, instead of holding an in-person gathering. The keynote speaker will be Donna Edwards, the first lady of Louisiana.*

The virtual March for Life will occur during a tumultuous time in Washington, coming the week after President Joe Biden's inauguration that was held with increased security because of the assault on the U.S. Capitol earlier in the month by pro-Trump supporters.

Despite the upheaval, pro-life leaders on both sides of the political spectrum say that Trump's claims of voter fraud and the riot on Capitol Hill haven't changed their view of Trump or altered the trajectory of the pro-life movement. 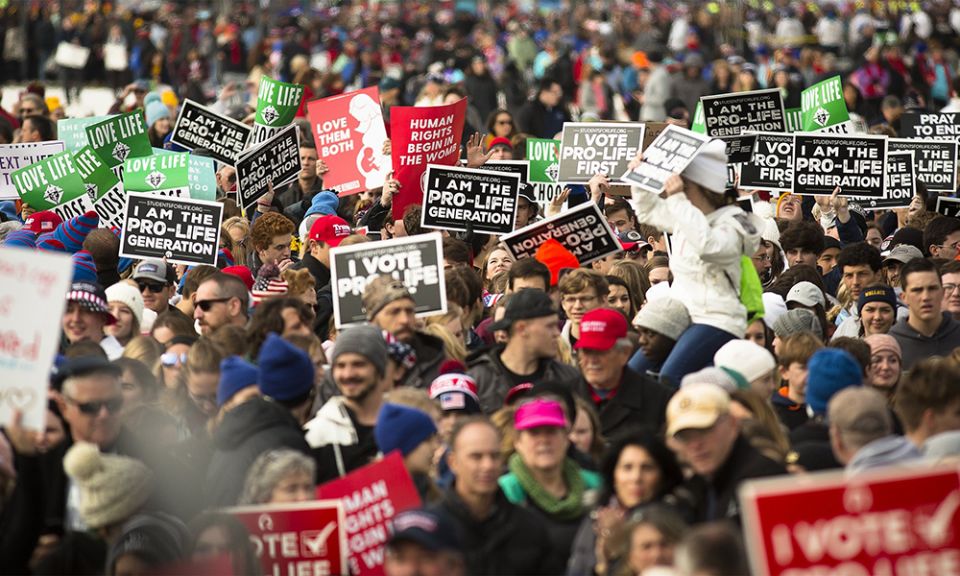 A week after the attack on the U.S. Capitol, Abby Johnson, a pro-life activist who spoke at last year's Republican National Convention, tweeted: "I hate violence. That's exactly why I stand against abortion. Abortion is the most vile form of violence that exists. To knowingly kill an unsuspecting, innocent human being in their place of safety is weak and cowardly. Women need help, not to be perpetrators of violence."

Johnson was a participant in protests at the U.S. Capitol Jan. 6, but said she did not participate in violence.

Day, for her part, said that she feels no sense of vindication about Trump because her organization didn't endorse Trump or Biden for president. She noted that in the early days of Biden's presidential campaign in 2019, the Democrats for Life of America scrapped a press release it was preparing to tout Biden's support for the Hyde Amendment, the law that bans federal funding of abortions, because Biden reversed his position on the issue.

Still, Day told NCR that she sees common ground with Biden's administration on the life issue, specifically with family paid leave — a policy she says would give "abortion-minded" women a way to keep their babies and receive financial support without losing their jobs or having to go back to work immediately after they deliver.

Shawn Carney, president and CEO of 40 Days for Life, a Texas-based organization that sponsors prayer vigils in front of abortion clinics around the world, said the attack at the U.S. Capitol was "irrelevant" to Trump's record on abortion and to the pro-life movement in general. 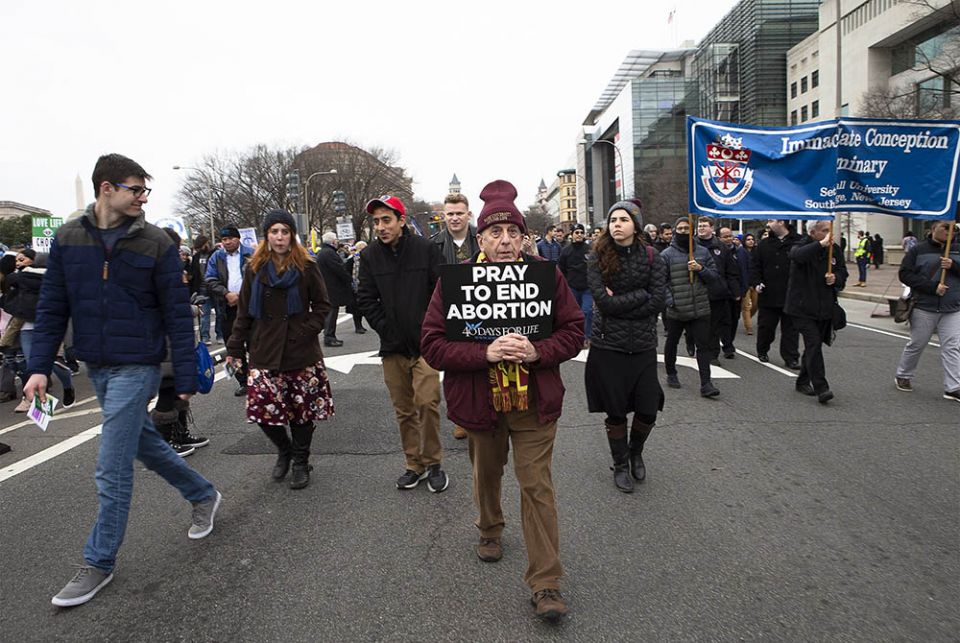 People walk up Constitution Avenue headed toward the U.S. Supreme Court Jan. 24, 2020, during the 47th annual March for Life in Washington. (CNS/Tyler Orsburn)

"It's not pro-life to storm the Capitol," Carney told NCR. He said that "how [Trump] left office and what his supporters have done" doesn't change Trump's principal pro-life achievement of appointing three justices (Neil Gorsuch, Brett Kavanaugh and Amy Coney Barrett) to the Supreme Court who may one day rule to overturn Roe v. Wade.

Because of the three justices, Trump was the "most pro-life president ever," Carney said, a characterization that Day disputes. She said that while Trump deserves credit for the Supreme Court appointments, he wasn't truly pro-life, because he wasn't "pro-whole life." She cited his support for the death penalty and skepticism about climate change.

But Carney said those issues don't carry the same weight that abortion does.

"The term 'pro-life' has always referred directly to abortion," Carney said. "He has been the best president on behalf of the unborn than any other president by far, and proportionately, those issues [death penalty and climate change] don't have the same weight. I mean, we abort 3,000 babies per day in the United States."

In December, Carney was honored at the White House by then Vice President Mike Pence for helping save the lives of unborn children — a recognition that Carney said he accepted on behalf of 40 Days for Life volunteers.

"We don't go out and try to get candidates elected, but I was honored by the White House, and that was great," Carney said.

"I think it would be a mistake to say the pro-life movement is just an arm of the Republican Party because that doesn't do justice to the grave reality of abortion," he said.

But Day said the pro-life issue is a bipartisan one and said it was a mistake to have Trump speak at last year's March for Life. "It was more of a Trump rally than a pro-life rally," she said.

She sees a bipartisan pro-life solution in restricting abortion rights while at the same time providing more resources to help pregnant women.

Carney said the United States now has the most "pro-abortion government" it has ever had, and yet both he and Day say the country is becoming more pro-life.

Day said the Democrats for Life of America has experienced "tremendous momentum" in the last year in terms of interest, fundraising and volunteers, noting that the organization's budget doubled last year. The increase, she said, was driven by disgust over the "extreme" abortion laws in certain states.

Carney, meanwhile, noted that abortion is becoming less and less popular, saying that the number of abortions has fallen to 700,000 to 800,000 per year in the United States from 1.2 million four or five years ago.

"That's during Obama and Trump; that transcends politics," he said. "We've seen a record number of abortion clinics closing, because that's market driven. … More people are rejecting abortion and don't want an abortion because they saw their nephew's ultrasound picture on the refrigerator when they were growing up."

[Mark Nacinovich is a New York-based writer and editor and former managing editor of the Tablet in Brooklyn; he has also written and edited for Catholic New York and the New York Post.]

*A previous version of this story indicated the incorrect speaker for the Democrats for Life meeting.

Mark Nacinovich, a New York-based writer and editor, was formerly managing editor of the Brooklyn Tablet and has also written and edited for Catholic New York and the New York Post. He is a graduate of the University of Chicago.

By end of Obama's presidency, most hope had vanished