Marisa de Martínez, sister of Roberto D'Aubuisson, speaks of Óscar Romero and her own spiritual calling 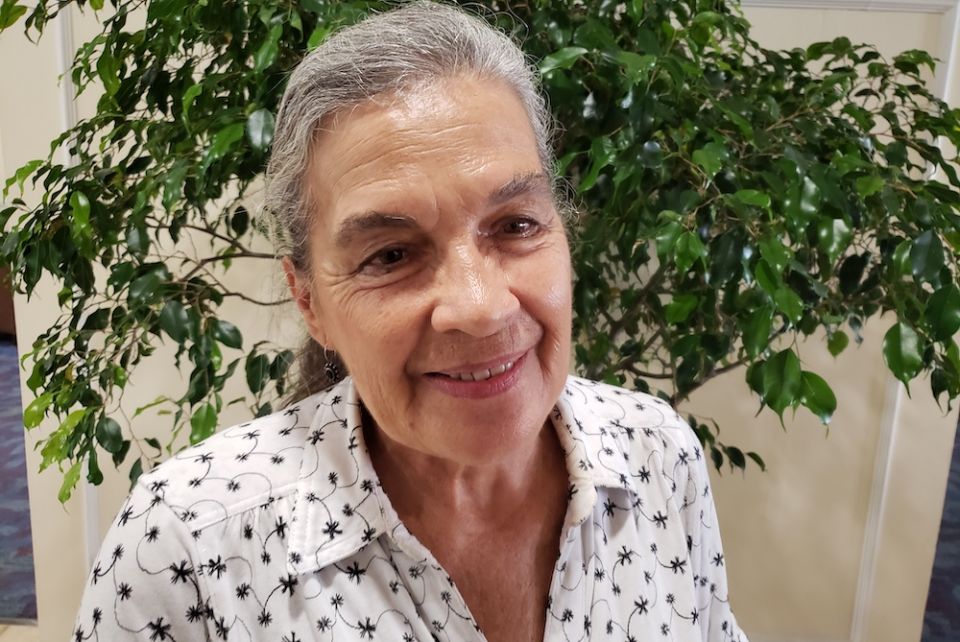 She finds in Romero a model and beacon for her own social activism. But mingled with that inspiration is a sadness borne from family history: Martínez is the sister of Roberto D'Aubuisson, the late death squad leader and political figure whom a United Nations truth commission in 1993 named responsible for ordering Romero's 1980 assassination.

Though she has discussed her brother publicly many times, Martínez says it is never easy.

"It's difficult to think that he died in total peace," Martínez said of her brother, who died of cancer in 1992. She spoke with NCR in Spanish through a translator.

"A day before his death, I asked him to seek forgiveness to Monseñor Romero so that could let his spirit out," Martínez said in an interview in San Salvador, where she lives and works. "I don't know what happened in his mind. But he did cry." 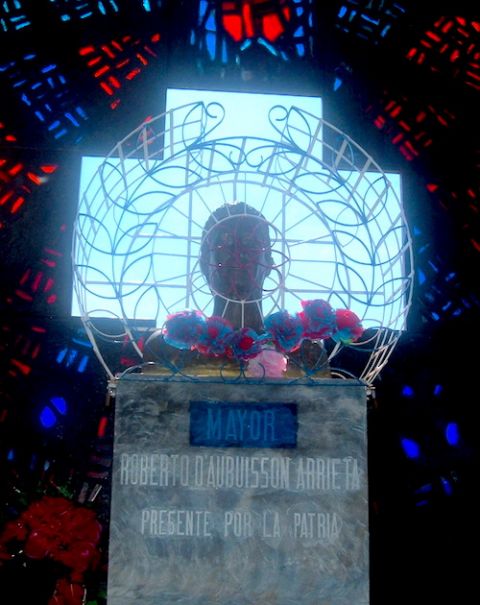 In the midst of the Salvadoran civil war of the 1980s, D'Aubuisson was a fixture on Salvadoran television, calling out enemies he labeled as communists. "Many people died [after] Roberto mentioned them on television," Martínez said in a Spanish-language interview with the BBC in 2018. Rumors of D'Aubuisson's preferred method of torture helped earn D'Aubuisson the notorious nickname "Blowtorch Bob."

The New York Times' 1992 obituary of D'Aubuisson quoted Robert White, the United States Ambassador to El Salvador from 1977 to 1980, as describing the right-wing political leader as having the "sick mind" of "a "pathological killer."

But even such a feared figure was a member of a family who experienced differences, disagreements and contradictions with relatives.

Martínez herself is a bit discreet and even reticent about her famous brother, saying, "We didn't have a close relationship." But she does say that, "in any family, each sibling has an option — your own path."

Her and brother's path started with life in the commercial city of Santa Tecla, outside of San Salvador. The D'Aubuisson family had French roots, the Times noted. The family was not wealthy, but solidly middle class: her father, Roberto D'Aubuisson Andrade, was a businessman, and her mother, Joaquina Arrieta Alvarado, a local civil servant, the Times' obituary said. Martínez was the youngest of four children; Roberto the second oldest.

Religious influences came early to Martínez. Her teachers included the Ascension sisters — the Hermanas de la Asunción — and she recalls that even as a little girl she was fascinated by stories of their mission work. In her teens, Martínez took up an invitation by the sisters to help teach young children in the crowded working-class community of Soyapango, where Carmelite sisters also worked.

"I don't remember what we taught them, it must have been horrible," Martínez recalled of her teaching experiences. "But it did open up to me a reality about my country I didn't know about." She credits the Ascension sisters for instilling in her values she still upholds and affirms: commitment, solidarity, and the importance of history and social context.

No surprise, then, that at age 18, Martínez volunteered for mission work in Guatemala and considered consecrated life herself, even taking the initial steps of joining the congregation. But eventually she decided to forego that and embrace work seeking social change in El Salvador. "I preferred a secular life," she said.

"The Lord has his ways with every person," she said. "I know I've been 'called' since I was little." And in being "called," Martínez was, as the BBC profile described it, "the rebel of a right-wing conservative family fond of olive green."

Her family took it for granted that the "military would dominate the country for years," she said. 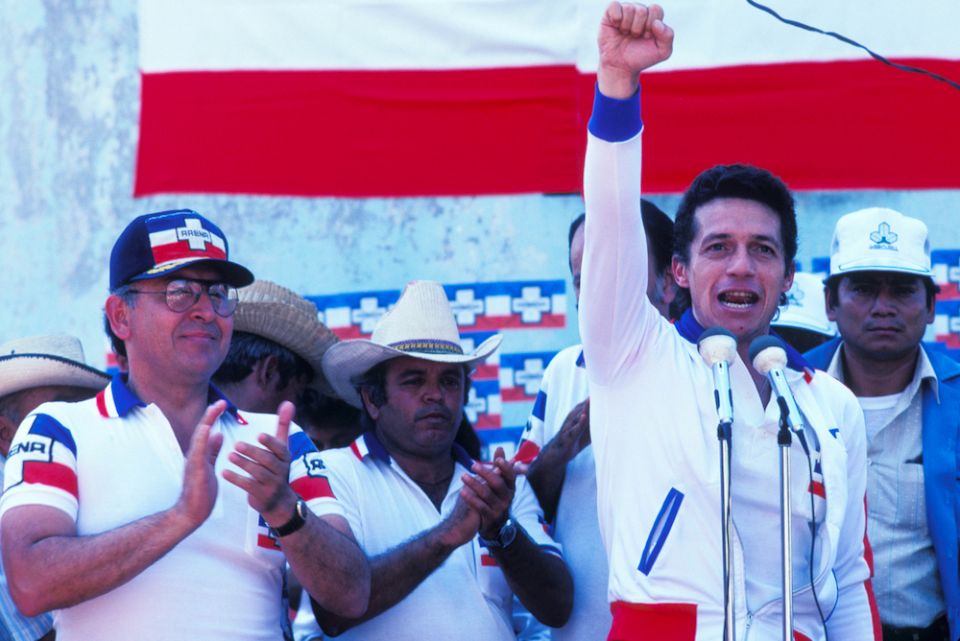 In that sense, her brother Roberto's life took a more expected path: joining the military, rising through the ranks and attending the School of the Americas. Eventually he became the president of El Salvador's Constituent Assembly in the early 1980s — but only after involvement and leadership in right-wing death squads.

D'Aubuisson always denied he had connections to the death squads, the Times obituary reported.

He became a pivotal figure in forming the right-wing Nationalist Republican Alliance party known as ARENA. That party still has a strong identification with El Salvador's Catholic right. Martínez's experiences with the church, however, were wholly different. With seeds planted by the Ascension sisters, she was influenced by the burgeoning movements of liberation theology that marked much of Latin America in the 1970s and stressed the church's need "to make a preferential option for the poor."

"I believe the Salvadoran church even now needs to follow the suggestions of the Medellin Conference," she said, referring to a landmark 1968 meeting of Latin American bishops in Colombia that showed the growing influence of liberation theology in the region. "We're still behind the times."

Yet in the 1970s and 1980s, the church in El Salvador began to change some — no easy thing for a church that had been tradition-bound, conservative and, as Martínez said, "committed to the upper class." 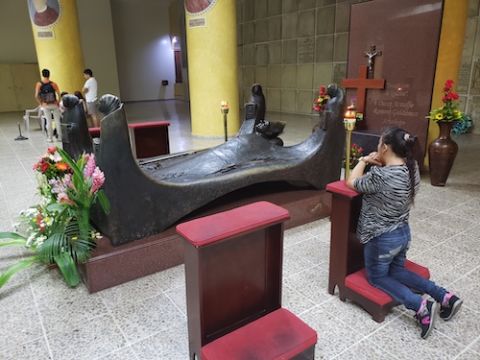 Romero was a catalyst for such change, and Martínez believes that Romero's "conversion to the church of the poor" was not, as some have argued, a sudden change caused by the 1977 murder of his friend, Jesuit Fr. Rutilio Grande. Rather, it was a path that emerged slowly but strongly as Romero witnessed "the reality of his country."

"He always wore the clothes of a priest and maybe that was conservative," Martínez said of Romero. "But that was just a style. I'm convinced he was really a prophet, with all of the biblical characteristics of a prophet like Jeremiah."

She said Romero's example was to point toward a conversion to those, like her family, who knew some affluence and privilege.

Martínez's own conversion has resulted in work with the Óscar Romero Foundation, an organization dedicated to continuing Romero's work, and her own humanitarian group, the CINDE Association, or Children's Development Centers. Its mission is "to promote a comprehensive education to girls, boys, adolescents and young people from excluded social sectors," in underserved areas, such as Mejicanos, a poor area in San Salvador.

Martínez's work in areas like Mejicanos has not gone unnoticed.

The former Passionist priest Antonio Rodriguez, a human-rights activist involved in ministry to current and former gang members and known in El Salvador as Padre Toño, has known of CINDE's work for more than 20 years.

He calls Martínez "a woman full of faith and great 'Romerist' spirit." 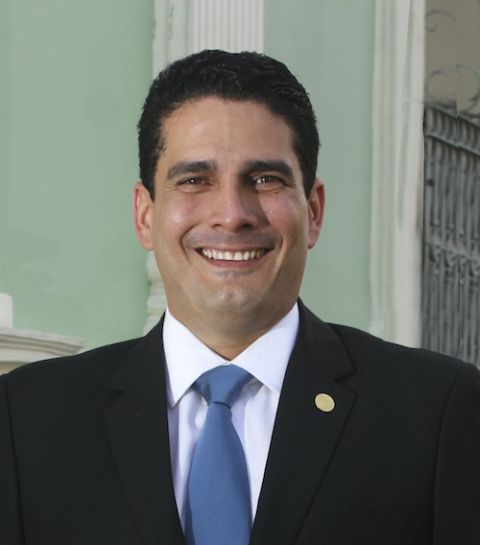 A different story emerges from the other side of the family: one of her late brother's sons, Roberto José D'Aubuisson Munguía, is a prominent ARENA member and has been mayor of Santa Tecla since 2015.

Martínez said she is "not close" to her brother's son but said that is simply due to the circumstance of her family's different paths.

"We don't talk to each other," she said of her politician nephew. "He denies that that his father had Monseñor Romero killed."

The name D'Aubuisson proved a burden, especially during the war, which is why she always uses her late husband's family name. (Her husband, Edin Martínez, the former Salvadoran minister of housing and urban development, died in 2017.)

Martínez would rather not dwell on her brother and his place in Salvadoran history. She would rather focus, instead, on the work that still needs to be done in El Salvador. She continues her association with the Ascension sisters and their work, as well as hers, is about real and concrete challenges — challenges that date back to Romero's time and earlier.

"Insecurity, violence — in some areas you don't see it," she said of ongoing violence in the country. "But that's not true in 'unprotected' neighborhoods' like Mejicanos. There, it's more insecure than it was during the war."

Martínez wants those who still call Óscar Romero a communist to visit areas like Mejicanos. "They are afraid," she said. "I challenge them and ask, 'What do you know about your country?' "

She knows her country's history is inexorably tied to Romero's life and death. Martínez recalls seeing Romero at public events and writing him a letter after he won an international human rights prize. He responded with an appreciative "thank you" letter.

Martínez received the letter on March 25, 1980 — the day after Romero was assassinated.