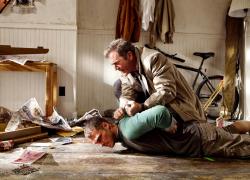 Mel Gibson as Thomas Craven and Shawn Roberts as Burnham in "The Edge of Darkness" (Warner Bros.)

Director Martin Campbell’s new film, “The Edge of Darkness,” is a blessing of sorts for Academy Award-winning director/writer/actor Mel Gibson. In this tense conspiracy thriller, Gibson plays Thomas Craven, a Boston police detective. On a rainy night, he welcomes his daughter home from her secretive job. Once home, Emma (Bojana Novakovic) wants to tell her father something but as they step out into the night she is blasted away by a powerful rifle before she can do so.

The Boston cops think that Thomas was the target but he turns small signs into clues and is soon carrying out his own investigation. With nothing to lose now that his daughter is dead, he vows to get the killer or killers who took away his only child.

Enter Darius Jedburgh (Ray Winstone), an agent acting for a political and corporate nuclear arms alliance, indeed the very company where Craven’s daughter had worked as an intern. Jedburgh warns Craven that he is meddling in deadly matters and recognizes Craven’s ruthless intent to catch and kill his daughter’s assassins. Jedbugh acknowledges that he is a mercenary, and because he is the same kind of man, is drawn to Craven’s motive as a father; he comes to understand that having a family is what gives value and meaning to life.

The plot turns on the idea of what it means to be a father.

“The Edge of Darkness” is a compelling two-hour film based on a 1985 BBC television series of the same name and the same basic storyline.

Aside from its entertainment value, the film provides a study of the lead actor, Gibson, several years after the religious epic he directed, “The Passion of the Christ.” One could say that Gibson as actor and director and producer has been walking on the edge of darkness for sometime. Films such as “Braveheart,” “Payback,” “The Patriot” and “Paparazzi” feature extreme, bloody violence and often a revenge theme.

Last year, during the promotion of “The Stoning of Soraya M.,” I asked Catholic film producer Steve McEveety how he and Gibson could release “Paparazzi,” a film that glorifies and legitimizes revenge, in the same year as “The Passion of the Christ.” McEveety replied, “There are some things that with hindsight, one would not do.” The argument that the theme of someone dying for others, or redemption, in Gibson’s films is as frequent a theme as revenge, only increases confusion about the person behind his cinematic identity.

I often have difficulty with Gibson as an actor. When he gets a “Mad Max” or “Lethal Weapon” kooky glint in his eye or his actions mimic that of previous roles, I find it difficult to take him seriously. However, in “The Edge of Darkness” Gibson emerges as a true actor who fills his role so completely that he makes us forget he is Mel Gibson and instead, he is a Boston cop who has lost the love of his life, his daughter. His lined, leathery face and weary eyes may have their sources in his real life drama, but we don’t care as the film unfolds.

His name, Craven, means cowardly but he is never that. At one point, Emma tells him: “I wish you had someone in your life.” He says, in an authentic Boston Southy accent, “Who knows? Maybe I have a honey on the side.” In actual fact it was revealed that Gibson did have a girlfriend during the making of the film. She later gave birth to their daughter and Robyn, Gibson’s wife of more than 25 years, subsequently filed for divorce.

“The Edge of Darkness” was cowritten (with Andrew Bovell) by Oscar-winner William Monahan, who scripted Martin Scorsese’s Academy Award-winning film “The Departed” (2006). The avid cinephile will find similarities, especially in the film’s denouement. Here, the incestuous political-corporate intrigue works almost too easily to create the context for the film, something a longer movie or a television series could complicate even more or use as more subtle political commentary.

I appreciated the restraint shown in Campbell’s directing, Rather than go for the jugular, so to speak, he has Gibson stop before he pounds someone into oblivion. Campbell shows a man struggling with his humanity as a father, who tells a corrupt cop friend who betrays Craven to protect his own family that he has to decide whether he is going to bang the nails or hang on the cross. A crucifix hangs on the wall of Craven’s kitchen, as we would expect of an Irish Catholic Boston cop. But Campbell does not hit us over the head with the image or the analogy and he doesn’t let Gibson do it either.

All this does not diminish the reality, however, that “The Edge of Darkness” is a violent film about violence to ethical and moral integrity. The film demonstrates that violence, once rationalized or legitimized, extends to affect the trust needed between persons, families, in workplaces, nations and the world.

Stepping onto the edge of darkness and into the light may be the best thing Gibson has done artistically in a long time. This is one film where he doesn’t lose his humanity to prove that he has it.

Time to live the politically impossible art of the Gospel