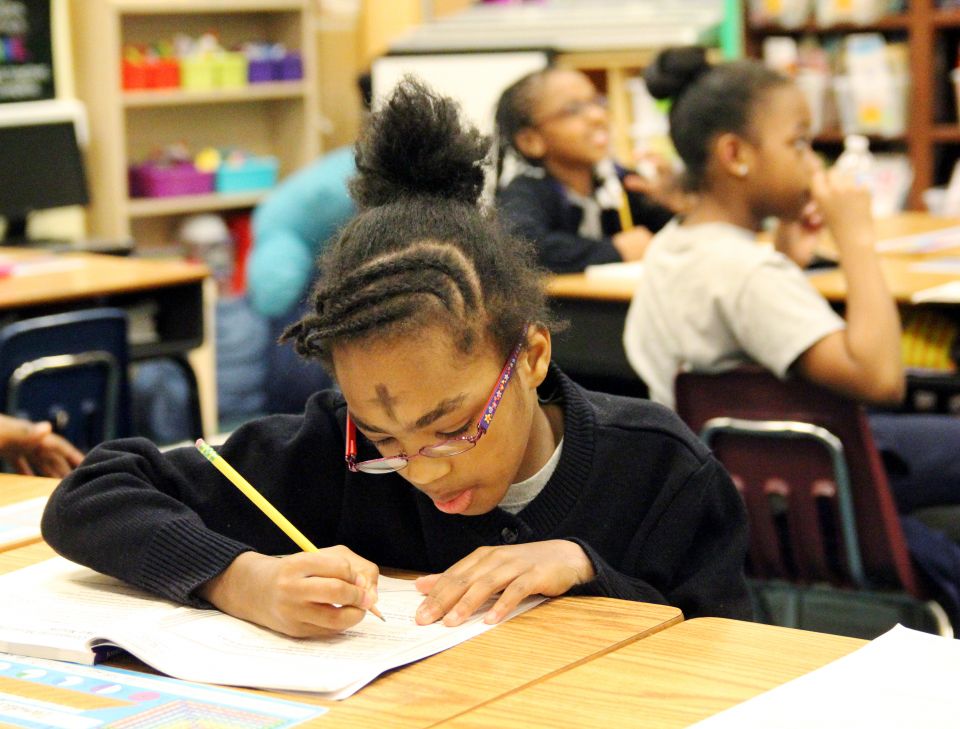 A students work in the classroom Feb. 2016 at a Catholic school in Philadelphia. (CNS/Sarah Webb, CatholicPhilly.com)

Washington — A trust fund that supports a Catholic school network in inner-city Memphis, Tennessee, is running dry, forcing diocesan officials to announce that the schools will close at the end of the 2018-2019 academic year.

Vince Higgins, director of communications for the Diocese of Memphis, said the closing of all nine Jubilee Catholic Schools as well as the affiliated St. Michael School was "a long time coming."

The diocese expects that a separate network of charter schools will take the place of the jubilee schools that will keep "the same schools, same curriculum, same teachers, same student pool, same parents" in place, allowing for a high level of academic achievement to continue, Higgins said.

Organizers of the charter school plan must meet a Feb. 1 deadline to file a letter of intent to open the new schools for the 2019-2020 academic year.

The jubilee school network was formed in 1999 with a multimillion dollar donation from an anonymous group of donors who wanted to reopen Catholic elementary schools in some of the city's neediest neighborhoods.

The network expanded to nine schools over the years. Higgins said that while St. Michael School was not part of the network, it received support from the trust fund to keep its doors open.

The schools opened with a plan to include tuition-paying students as well as those from poor families who could not afford tuition. In more recent years, the number of nonpaying students rose, causing the trust fund to draw down more rapidly, Higgins said.

"Because it grew so large so fast for the last few years, the trust has been used to overcome deficits," he explained. "We're at the point now that the trust fund is going to be depleted."

About 1,500 students are enrolled in the jubilee schools with an additional 152 students enrolled at St. Michael School. Among the schools closing are Memphis Catholic Middle and High School and eight elementary schools.

Replacing the Catholic schools with publicly funded but privately run charters schools is the "best possible outcome considering the circumstances that we are faced with," Higgins said.

After filing a letter of intent Feb. 1, the charter school supporters must file a formal application by April 1. State and local school officials then will vet the proposal before making a final decision on whether the plan meets legal and educational standards.

"There has not been a lot of talk between the charter group and the diocese," Higgins said. "The charter group is separate and we won't know who they will be until Feb. 1.

Should the charter schools open, they will not have a religious component, a fact that concerns some parents, Higgins added.

"That is the biggest rub that people are having about it. They're asking, 'What about the Catholicity of the school? What about faith formation?' "

Higgins said diocesan officials hope that the Catholic faith would continue to be taught by educators from each school's affiliated parish during after-school hours.

The jubilee schools were welcomed in 1999 with deep appreciation and prayers of thanksgiving by diocesan officials, including now-retired Bishop J. Terry Steib. The first school, St. Augustine, opened with kindergarten through second-grade students with an additional class added each year through sixth grade. Other schools in the network gradually opened one by one and expanded as well.

In 2006, $44 million in donations led to the establishment of the Catholic Memphis Urban Schools, a trust fund to support the jubilee schools.  At the time, Steib said he felt the future of Catholic schools in the inner city was assured.

However, changing demographics meant more poor families who could not afford to pay tuition remained in the city. Parents opted to send their children to the schools over Memphis public schools because of high academic achievement and, to a lesser extent, the teaching of the Catholic faith.