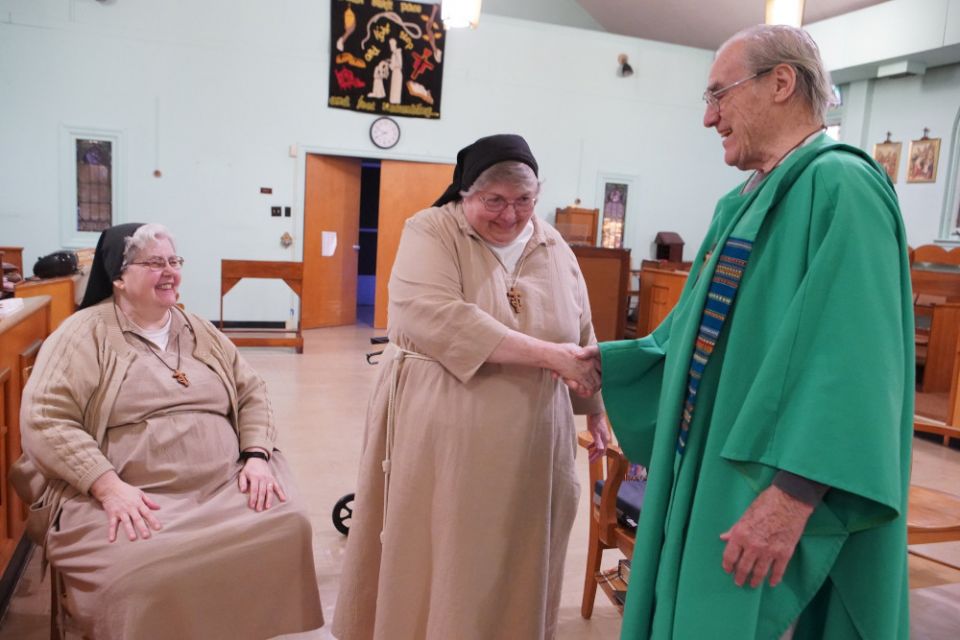 Fr. David Knight, a priest of the Diocese of Memphis, Tenn., celebrates Mass for Poor Clare sisters Nov. 20, 2019, at their monastery in Memphis before it closed at the end of that year. Knight died March 21, 2021, at age 90 in Guatemala. He was invited to minister to Poor Clares there after the Memphis monastery where he had lived for 45 years closed. (CNS photo/Karen Pulfer Focht)

Memphis, Tenn. — Fr. David M. Knight, the oldest priest of the Diocese of Memphis, died in Guatemala March 21. He was 90.

For 45 years, Knight had been in residence at the Monastery of St. Clare until it closed in December 2019.

He was invited to Guatemala by Cardinal Alvaro Ramazzini of Huehuetenango, Guatemala, to come help at the Poor Clare sisters' monastery in his diocese.

Knight went in January 2020 and had planned to be there for only a few months until COVID-19 struck, so he decided to ride out the pandemic there.

According to Karen Pulfer Focht, a freelance photo journalist in Memphis and contributor to the diocesan magazine, Faith West Tennessee, friends of the priest in Memphis had chartered a medical evacuation plane for him to return home when he fell ill.

"He never made it," she wrote in a posting on her website, adding he had turned 90 less than a week before his death. He lay down for a nap and "died peacefully while sleeping and surrounded by prayers of the community at the monastery."

After his death, he was going to be cremated and his remains brought back to the U.S., but when it was determined he'd had COVID-19, he had to be buried within eight hours according to Guatemalan law. He was buried at the Poor Clares' monastery in Huehuetenango.

Cardinal Ramazzini had visited Knight the morning of March 21 and gave the priest Communion, and returned shortly after he died, according to Sr. Agnes Stretz, one of the nuns at the monastery.

She had lived at the Memphis monastery before it established the monastery in 1980 in Huehuetenango at the invitation of Bishop Victor Hugo Martinez, who headed the Guatemala diocese from 1975 to 1987.

A biography about Knight is posted on the website of Immersed in Christ — https://www.immersedinchrist.org — which offers programs on the spirituality of the laity. This programming was launched by Knight's 1977 book "His Way."

The priest was born March 16, 1931, in Dallas, one of four sons. One brother, Henry, died in infancy. He is survived by two others, Mickey and Robert.

He was ordained a Jesuit in Lyon, France, Sept. 2, 1961, and spent three years as a bush pastor in the African nation of Chad.

He earned a doctorate in theology at The Catholic University of America in Washington. After serving as acting rector of the Jesuit novitiate in Grand Coteau, Louisiana, he was made pastor of two parishes there — one white, one Black — with the mission of integrating them.

He was then made spiritual director for the Jesuit community of Loyola University New Orleans.

In 1973, he went to Memphis to help found a religious order of nuns, "which did not succeed," according to the biography. But while he was engaged in the effort, he decided to become a priest of the Diocese of Memphis; he was incardinated into the diocese in 1980.

He served as a pastor three times, taught in both boys' and girls' high schools, including a rural Black high school and a school for troubled girls under the care of the Sisters of the Good Shepherd. He spent four years as a college campus minister at Christian Brothers University in Memphis, where he taught spirituality.

He also was diocesan spiritual director for Cursillo and the Hispanic Catholic community of Memphis.

He also was chaplain to five different communities of women religious, both active and contemplative.

The author of about 40 books, he gave over 500 workshops, missions and retreats all over the world for priests and deacons and on religious vows and lay spirituality.

Knight taught spirituality at The Catholic University of America and Loyola University New Orleans and to ministers and seminarians of several denominations at the Presbyterians' Memphis Theological Seminary.

In a March 26 tribute to the priest's life and ministry, La Croix, a national daily French Catholic newspaper published in Paris, said Knight wrote a letter to family and friends at the beginning of Lent to wish them a happy Lent and Easter, "saying how much he valued their love and goodness."

"As I inevitably prepare for death — correction: for the fullness of life — spending my 90th year in the retreatlike setting of the Poor Clare monastery here, my greatest source of confidence is my sins!" Knight told them.

In her story for Faith West Tennessee, Focht described the last days at the Memphis monastery for the nuns and Knight.

"As Christmas approached and 2019 came to a close, the Monastery of St. Clare in Tennessee quietly closed. An 88-year-old priest, Father David Knight, was the last remaining resident. He had hoped to live out his days in his tiny single room with a connecting office where he has written over 40 books."

She recounted the last Mass Knight celebrated in the monastery chapel.

"This is a holy place, that has been full of many holy women who have lived here," he said from the altar.

"This is a type of death, but God is with us all the time. He is with us wherever we go," he added. "Our happiness is not dependent on anything on this earth."

Rowland, NCR board member, dies at 78