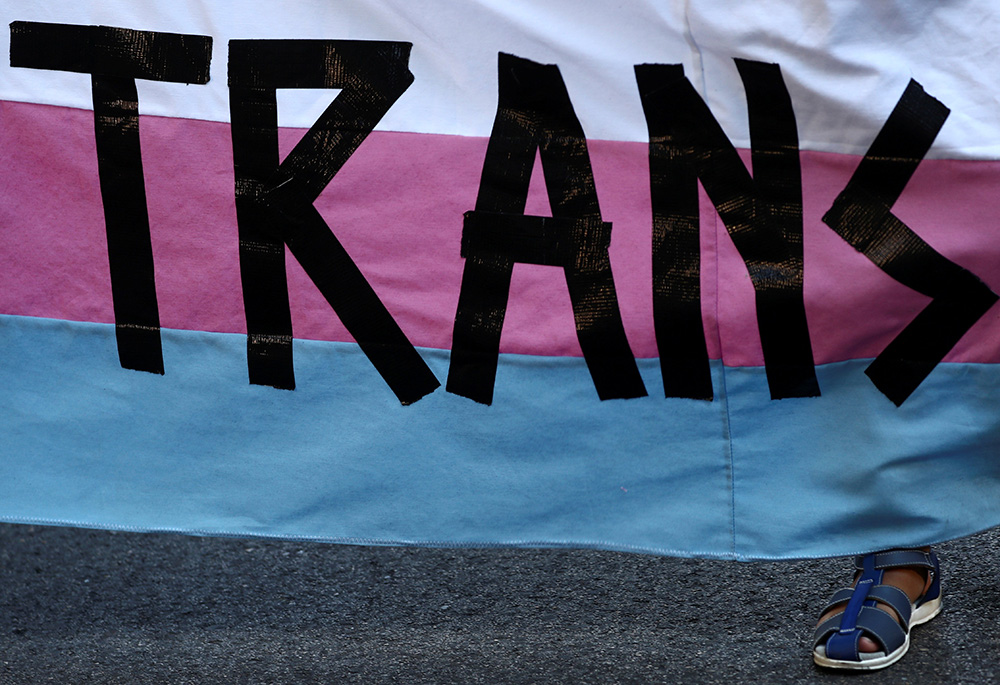 A person holds a "Trans" banner in this illustration photo. (CNS/Reuters/Sergio Perez)

The Archdiocese of Milwaukee has issued a sweeping new policy aimed at persons who do not identify with their biological sex, stipulating that parishes, schools and other Catholic organizations across Wisconsin's largest city must require people to use bathrooms associated with their birth gender.

In addition, the archdiocese's new rules stipulate that a person's biological sex dictate which dress codes they follow, that medications like "puberty blockers" be barred on church property, and that transgender people and their families be directed to ministers and counselors who can provide support "in accord with the directives and teachings of the Church."

The policy also bars use of preferred pronouns, a now fairly common practice in which people identify in advance how they wish to be addressed by others.

The Milwaukee rules are the latest in a stream of such regulations issued in the past two years by nearly a dozen dioceses across the United States. While their supporters say the policies are necessary guardrails, others have labeled them anti-transgender, "callous" and likely to push more people out of the church.

"My initial reaction was one of fear," Fr. Greg Greiten, pastor at Milwaukee's St. Bernadette Catholic Parish, told NCR about the new policy. "That we are not listening to the LGBTQ population once again, and the stories and the experiences of the LGBTQ community."

The lives of transgender people "have become a lightning rod for people to declare certain ideological allegiances," said Craig Ford, a theology professor who studies sex and gender at St. Norbert College, in De Pere, Wisconsin. "And I think now that that's sort of boiling over into a Catholic discussion."

The guidelines from the Milwaukee Archdiocese, titled "Catechesis and Policy on Questions Concerning Gender Theory," were issued Jan. 18. They were compiled at Archbishop Jerome Listecki's request by an ad hoc committee of the archdiocesan healthcare and bioethics committee, according to an email Listecki wrote to priests announcing the new policies.

The ad hoc committee was led by Fr. Javier Bustos, an archdiocesan vicar general and healthcare and bioethics delegate, and other members had backgrounds in theology, education and psychiatry, according to the email.

The guidelines, Listecki wrote in his email, apply to all church employees, personnel, volunteers, contracted vendors "and those entrusted to the care of the Church."

Explaining his reasoning for the guidelines, Listecki wrote that every time and age is presented with particular challenges and opportunities, and that the current period poses "the need and gift of sharing fundamental tenets of a basic Christian anthropology, one that understands each man and woman as made in the image and likeness of God, imbued with dignity, and gifted as male and female." 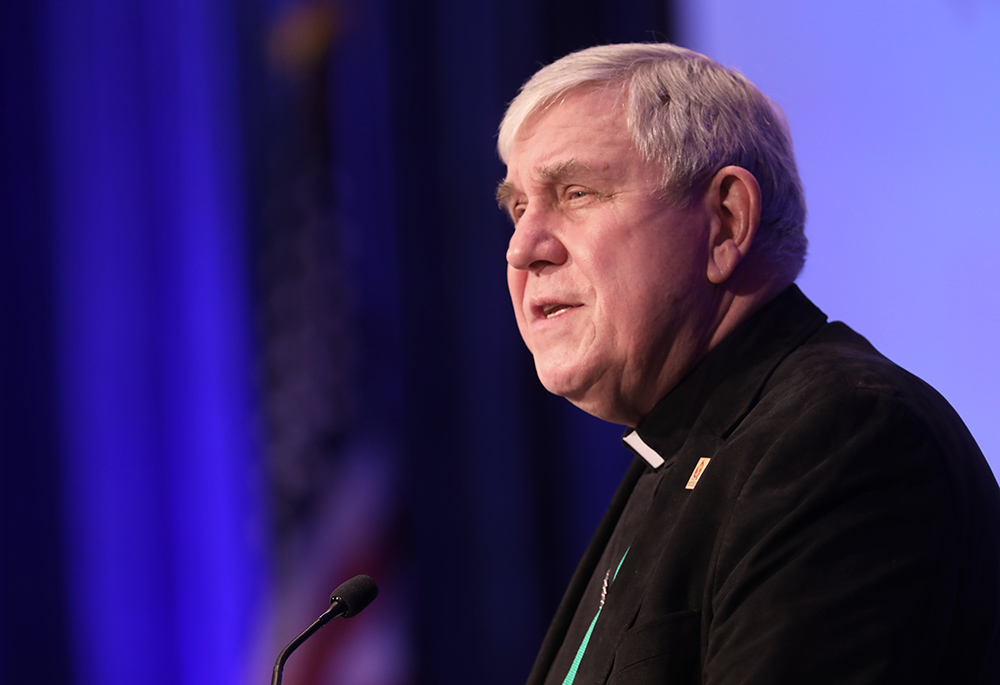 Archbishop Jerome Listecki of Milwaukee speaks during a Nov. 16, 2021, session of the fall general assembly of the U.S. Conference of Catholic Bishops in Baltimore. (CNS/Bob Roller)

The four-page document summarizes a selected range of church teachings that deal with questions of personhood, biological sex and gender. The guidelines state that a person's biological sex is a gift from God that is "unchangeable" and "inseparable" from a person's gender.

"Should someone experience a tension between biological sex and 'gender,' they should know that this interior conflict is not sinful in itself but rather reflects 'the broader disharmony caused by original sin' and often results from the residue of social ills and cultural distortions of what constitutes 'masculinity' and 'femininity,' " the guidelines state.

The document made a point of saying that transgender people should not be bullied "and treated with respect and charity," though added such charity "needs to be understood, confirmed, and practiced in the light of truth."

The guidelines also outline seven policies for all parishes, schools and archdiocesan organizations to follow. "As a general rule," it states, "in all interactions and policies, parishes, organizations, and institutions are to recognize only a person's biological sex."

On preferred pronouns, the archdiocese said they are not allowed in any documentation or by a person when talking or writing.

"Permitting the designation of a preferred pronoun, while often intended as an act of charity, instead promotes an acceptance of the separability of biological sex and 'gender' and thus opposes the truth of our sexual unity," the guidelines state.

The designation of bathroom use by biological sex extends to locker rooms, too, though individual-use bathrooms are permitted to be used by anyone.

The policies also prohibit the use or distribution on church or school property of any medications that are used in gender reassignment, including so-called "puberty blockers" that temporarily suppress the body's release of hormones like testosterone or estrogen during adolescence.

The archdiocese has scheduled a presentation for all clergy on the new guidelines for Feb. 15 at the Mary Mother of the Church Pastoral Center. 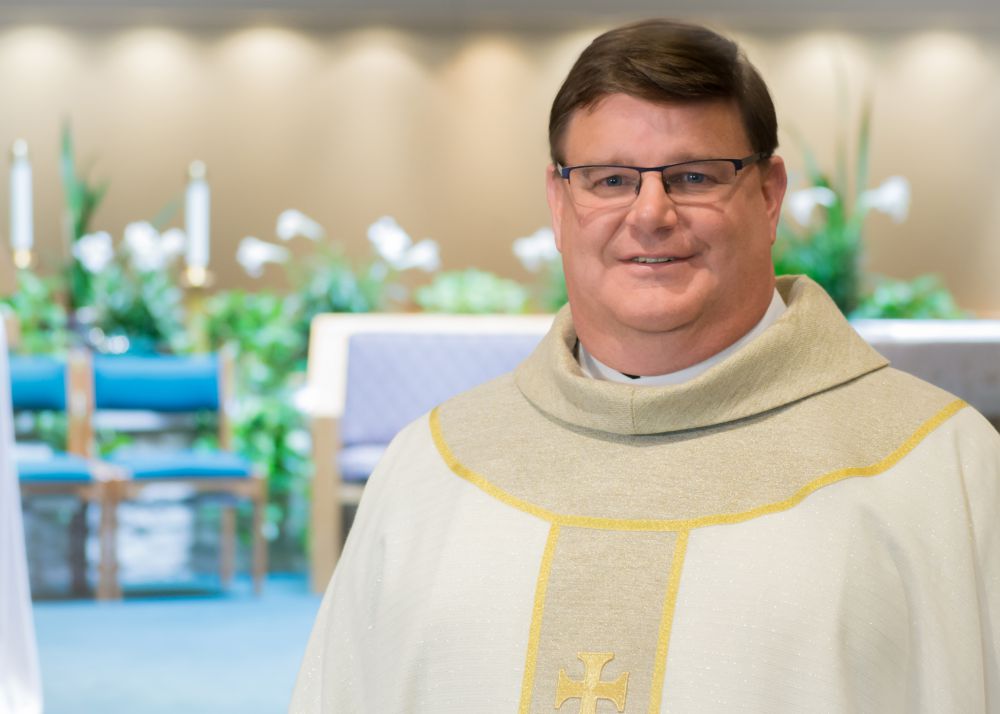 Greiten told NCR that some fellow priests he's spoken with are "dumbfounded" and that he's heard from other Catholics who are "extremely upset."

In 2017 Greiten shared with his parish that he is a gay, celibate priest. He said as a young gay male he felt separated and ignored by the church, and he now worries that the new archdiocesan policies will only extend that feeling further among LGBTQ people today.

"My greatest fear is that in not listening, we are going to traumatize sexually yet another generation," he said.

In the past two years, more than a half-dozen dioceses have issued similar guidelines addressing questions of gender. They include the archdioceses of Indianapolis and St. Louis, the dioceses of Springfield, Illinois; Lansing, Michigan; Marquette, Michigan; and Arlington, Virginia.* Minnesota's bishops also issued a joint document.

The crush of gender-focused policies follows the 2019 release of a text from the Vatican's Congregation for Catholic Education that was critical of modern gender theory. Titled "Male and female he created them" and presented as an aid to Catholic teachers and parents, the text stated that the view of gender existing along a spectrum was "nothing more than a confused concept of freedom in the realm of feelings and wants."

Among the criticism that document drew was that it didn't consult with anyone within the transgender community — a failure that congregation prefect Cardinal Giuseppe Versaldi admitted several months after it was issued.

A similar lack of consultation with transgender and gender-nonconforming Catholics seems apparent in the string of policies from U.S. bishops, including the latest out of Milwaukee, said Francis DeBernardo, executive director of New Ways Ministry.

"And I think the biggest problem with these guidelines is that they show no concern for a human person who is experiencing the desire to transition gender," he said.

One came from Paulist Fr. Stuart Wilson-Smith, an associate pastor in Chicago, who tweeted that the policy represented "a callous, anti-intellectual and anti-human dumpster fire of a document unworthy of any association with the name of our Lord and brother."

In an email, Wilson-Smith told NCR that the document's omittance of terms like "trans" or "non-binary" discredited its message "from the get-go." He added that a number of the policy's statements were "either logically flimsy or pastorally detrimental," such as its statement that people experiencing a "tension" between their biological sex and gender should seek harmony between the two by "turning to Christ and to all that the Church provides."

"Piety has its place — I love our faith, our devotions and rituals — but no one has been well loved by a condescending platitude, and I don't understand why we expect LGBTQ+ people to settle for it," he said.

Several people who spoke with NCR criticized the restriction on using preferred pronouns.

Ford said that for many transgender people, those help express who they are, and rejecting their use "miss[es] the point about having real human connection."

Wilson-Smith said: "There is no evidence here of listening to something as simple as how marginalized individuals and communities prefer to be addressed."

Along with the lack of consultation with transgender people, DeBernardo said the document also lacked evidence the ad hoc committee spoke with medical professionals or reviewed scientific literature on the issue.

He added that decisions about names and pronouns and other areas addressed in the archdiocesan guidelines are best left to the individual schools and parishes.

"Our church is not one size fits all, and particularly on something as personal and individual as someone's gender identity," DeBernardo said.

Ford said the guidelines overall continue a trend in the church of "scapegoating" transgender and others in the lesbian, gay and bisexual community, and stand opposed to Pope Francis' call for a culture of encounter.

Along with increasingly polarizing the pews, he said it's also pushing people from the church, especially young adults who disagree with church stances on sexuality and gender.

"If we let this polarization completely determine our church reality, you're just going to have a fragmented church that replicates the fragmentation of our society. And that doesn't promise any sort of salvation or redemption or love," he said.

Added Greiten, "We need to have the encounter. Let's sit down, let's talk about these issues. … To ignore people is going to cause greater shame and trauma and abuse in their lives."

*Correction: This article has been amended since original publication to correct the state in which the Diocese of Marquette, Michigan resides.

A version of this story appeared in the Feb 4-17, 2022 print issue under the headline: Milwaukee Archdiocese takes aim at trans persons.