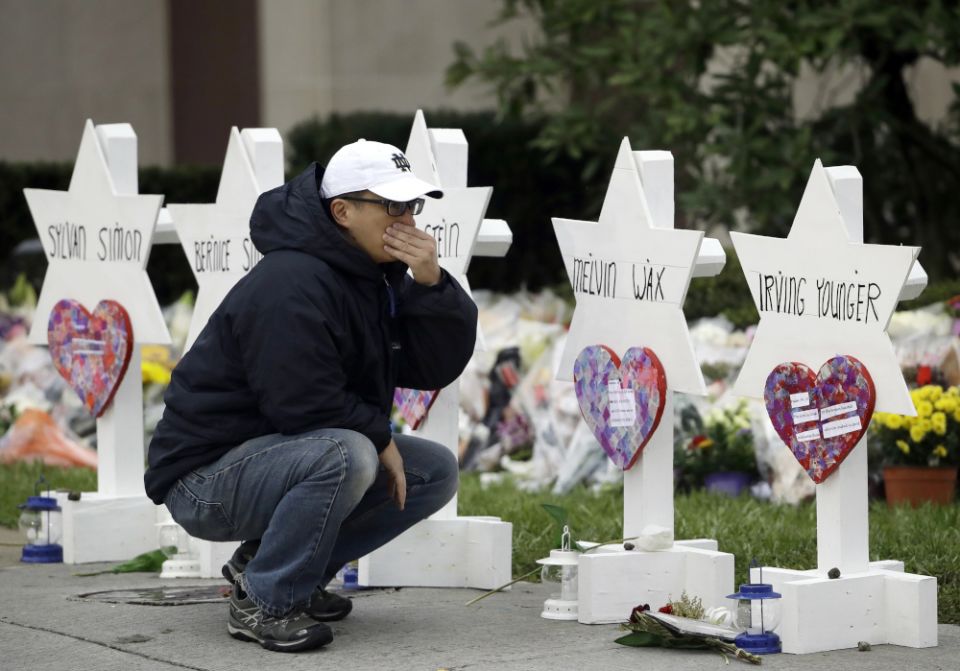 A person pauses in front of Stars of David with the names of those killed in a deadly shooting at the Tree of Life Synagogue, in Pittsburgh, on October 29, 2018. (AP Photo/Matt Rourke)

Two reports on extremist attacks in the United States document a marked decline in the number of Muslim Americans associated with extremist acts.

Extremists in the U.S. killed 50 people in 2018, according to a new report from the Anti-Defamation League’s Center on Extremism, which looked at fatalities from all groups. Only one of those attacks was perpetrated by someone associated with a radical Islamist group.

The rest were carried out by right-wing extremists of various ideologies, mostly white supremacists like Robert Bowers, who killed 11 members of Pittsburgh’s Tree of Life synagogue in October.

Another report by the Triangle Center on Terrorism and Homeland Security examined Muslim American extremism in particular. Its findings suggest that U.S. law enforcement leaders and counterterrorism experts pay a disproportionate amount of attention to “troubling but rare” violent incidents involving Islamists.

"My overall question is whether these scattered incidents constitute a threat to national security, which is how they’re presented," said Charles Kurzman, a professor of sociology at the University of North Carolina at Chapel Hill and the author of a report from Duke University’s Triangle Center on Terrorism and Homeland Security.

Overall, violent incidents by extremists are relatively rare in comparison with the approximately 17,000 killings in the U.S. each year.

Islamist-inspired killings in the U.S. are growing even more scarce. In addition to the one killing in 2018, 14 Muslim Americans were arrested last year for alleged involvement with violent extremism, the lowest total in a decade.

None of those arrests involved Muslims who entered the country illegally, despite President Trump’s claims that thousands of potential terrorists have attempted to cross illegally from Mexico. Experts say there has never been a case of a known terrorist sneaking into the country through open areas of the southwest border.

The Triangle Center’s report concludes: "The wave of Muslim-Americans associating themselves with the self-proclaimed 'Islamic State' appears to have dwindled."

One reason, wrote David Schanzer, director of the Triangle Center on Terrorism and Homeland Security at Duke University, is that movements such as the Islamic State group have lost battles and territory and, possibly, their ability to recruit online. 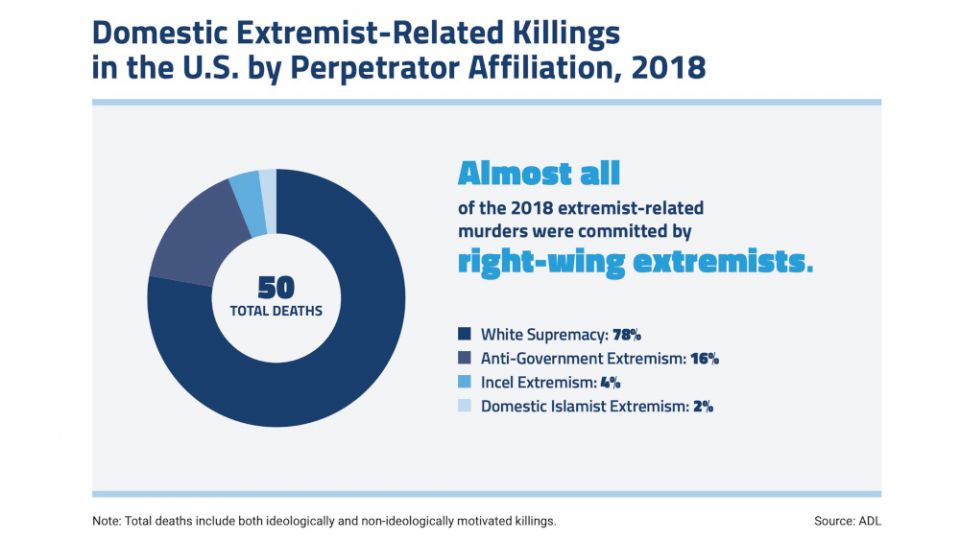 “Domestic Extremist-Related Killings in the U.S. by Perpetrator Affiliation, 2018.” Graphic courtesy of ADL

"The incidence of violence by extremist Muslim-Americans rises when foreign insurgent movements are successful," he wrote. "When these movements don’t seem to be doing much themselves, their use of guilt or shame to compel violence by diaspora Muslims loses its bite."

In the one Islamist-inspired killing last year, Corey Johnson, 17, killed a 13-year-old and severely injured two others in a stabbing spree during a sleepover. After his arrest, Johnson reportedly told investigators he had stabbed his victims "because of his Muslim faith."

The ADL report finds a sharp increase, on the other hand, in the number of right-wing motivated killings. Right-wing extremists killed 49 people in 2018, more than in any year since 1995, the year of Timothy McVeigh’s bomb attack on the Oklahoma City federal building.

No killings in 2018, it also notes, were related to left-wing extremism.

Mark Pitcavage, senior research fellow with ADL’s Center on Extremism, noted that the right-wing extremists don’t tend to belong to larger organizations. "Most extremists do not belong to any group," he said. "They just adhere to the ideology."

Still, he noted two groups that are gaining followers. Samuel Woodward, who stabbed a former high school acquaintance in Orange County, Calif., who was Jewish and gay, was a self-proclaimed follower of “Atomwaffen,” a neo-Nazi group whose members are young and violent. ("Atomwaffen" is German for "atomic weapon.")

Another group, sovereign citizen, also appears to be on the rise. Its adherents don’t believe in obeying any laws, rules or regulations that it thinks are part of a government conspiracy.

The ADL report recommends a federal law recognizing domestic terrorism as a crime, but researchers on both reports said anti-bias educational programs were important deterrents.

"Community strengthening around our core values of embracing difference is ultimately the only viable response,” said Kurzman. “We have to double down on our core values in response to these violent threats from whatever ideology."

Reclaiming veracity in a post-Trump world

Be you either hot or cold: Jesus' words, not mine