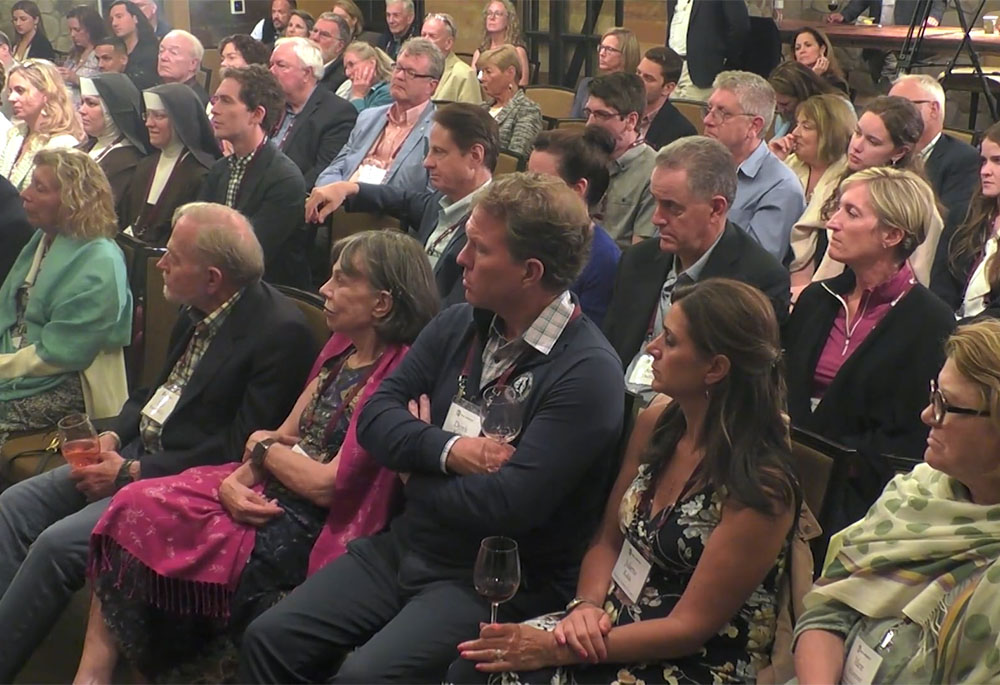 Laypeople and religious sit in the audience during talks at the Napa Institute's annual summer conference, held July 27-31. (NCR screenshot)

On the evening of July 30, former U.S. Attorney General William Barr addressed a friendly audience that over three days at the Napa Institute's annual summer conference had heard more than two dozen other speakers rail against secular modernity and envision an America where abortion is illegal in all 50 states.

But it wasn't until a group of progressive protesters briefly disrupted his remarks, prompting the audience of conservative clerics and lay Catholic business leaders to drown out the protests by praying and singing the Salve Regina, that Barr said he felt at home.

"If I had known about that, I think Lafayette Park would have been a lot easier," Barr said with a smile as he referenced his ordering federal law enforcement officers in June 2020 to clear protesters outside the White House so then-President Donald Trump could walk across the street to pose with a Bible at St. John's Episcopal Church.

The audience at the Meritage Resort and Spa in Napa, California, laughed at Barr's comment regarding the incident, where officers clad in riot gear used tear gas and rubber bullets to disperse people who were demonstrating against police brutality after the May 2020 death of George Floyd. 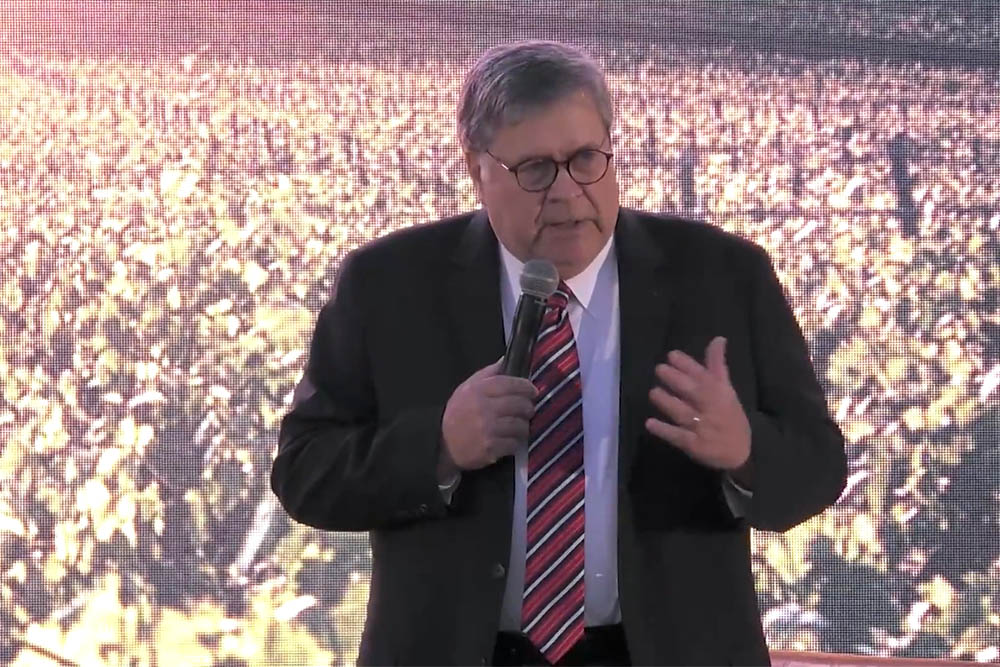 Barr's unapologetic stance and his subsequent comments that the protesters at Napa made his point about an authoritarian secular left that aims to "overthrow liberal democracy" dovetailed with the tone and content of the Napa Institute's 12th annual summer conference, which was held July 27-31.

Like Barr, several speakers who delivered keynote talks and participated in panel discussions with like-minded activists and academics throughout the conference bemoaned the wider culture as incompatible with and hostile to authentic Catholicism. They attacked "woke" business leaders, "gender ideology" and critical race theory, among other topics often highlighted in conservative media.

"We live in a time in which catastrophically bad ideas are floating all around," Msgr. James Shea, president of the University of Mary in Bismarck, North Dakota, said in a keynote talk reflecting on the 60th anniversary of the Second Vatican Council.

Speakers like Aaron Kheriarty — a psychiatrist who was fired from the University of California at Irvine in 2021 for refusing to be vaccinated against COVID-19 — said those who identify as transgender are pawns in a larger ideological plot to turn reality on its head.

"Transgenderism is the latest manifestation of a long struggle to liberate ourselves from nature itself, from the limits of human biology through technology and through social change," said Kheriarty, who is a fellow at the Ethics and Public Policy Center, a conservative think tank in Washington, D.C.

Some presenters suggested that the Catholic Church in recent years had lost its spiritual vigor by overly accommodating itself to the secular world. Several speakers at times quoted Popes John Paul II and Benedict XVI. Pope Francis, who has clashed with his conservative critics in the United States, was rarely mentioned.

Villanova University theology professor Jessica Murdoch told the Napa audience that today's Vatican documents often seem more like those of a United Nations nongovernmental organization. She said the church and the culture are at a crossroads: "As the past few years have shown many of us, we live in yet another age of discontent, of devastation, and even of barbarism," she said.

However, the roughly 800 people who organizers said paid the $2,700 registration fee to attend the conference — the fee was waived for bishops and slashed 50% for priests and religious — were given a reason for hope: the U.S. Supreme Court's June 24 ruling in Dobbs v. Jackson Women's Health Organization that nullified the constitutional right to an abortion.

"The morale of Catholics has never been higher, and the reason: because Roe v. Wade has been overturned," said Tim Busch, the co-founder and board chairman of the Napa Institute, a conservative organization that since its founding in 2010 has become a driving force in the U.S. Catholic Church.

'Our mission is clear; roll back abortion in all 50 states. We have to fight on all 50 fronts.'

Several bishops attended the conference and celebrated Mass for attendees, including Bishops Thomas Paprocki of Springfield, Illinois, and Andrew Cozzens of Crookston, Minnesota.

Cardinal George Pell, the Australian prelate and former Vatican official, was slated to speak but missed the event because of a bout with pneumonia. He recorded brief remarks in which he praised the Napa Institute for "its commitment to discussion, debate and to the concept of truth."

Busch, whose company developed the Napa Valley resort that hosted the conference, said in his opening remarks that the Napa Institute was founded to respond to a declining American culture that he said has "taken a turn for the right direction" with the reversal of Roe v. Wade.

"Our mission is clear; roll back abortion in all 50 states. We have to fight on all 50 fronts," said Busch, who likened the effort to outlaw abortion to the civil rights movement of the mid-20th century.

Busch said the high court's ruling in Dobbs provided "the backdrop" for the "entire" event. Several keynote speakers and participants in at least three breakout talks focused on the post-Dobbs abortion landscape and what the future could hold for the anti-abortion movement. 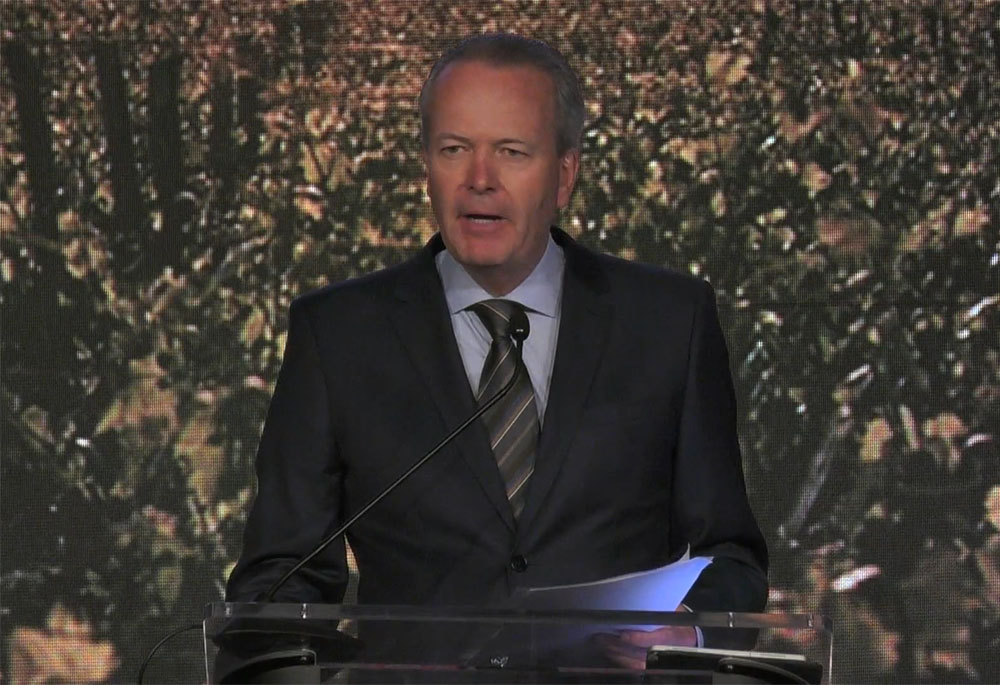 "Half of America identifies as pro-life," said Rose, who echoed other speakers throughout the conference in making misleading claims that most Americans are anti-abortion. Most public opinion polls indicate that a majority of Americans support restrictions, especially on late-term abortions, but believe the procedure should be legal, especially in cases of rape, incest and when the woman's life is at stake.

Some speakers at the Napa conference questioned the validity of those exceptions.

''Everyone knows abortion is not about victims of rape and incest, and everybody knows those arguments are designed to appeal to the emotions rather than to a careful thinking about what constitutes human personhood," Carl Trueman, a religious studies professor at Grove City College in Pennsylvania, said in a keynote talk where he connected the concept of personal autonomy to the story in Genesis 3 of the serpent deceiving Eve to disobey God and eat the forbidden fruit.

In praising the Supreme Court for returning the abortion debate to state legislatures, several speakers argued that the issue can now be decided in a more democratic manner. 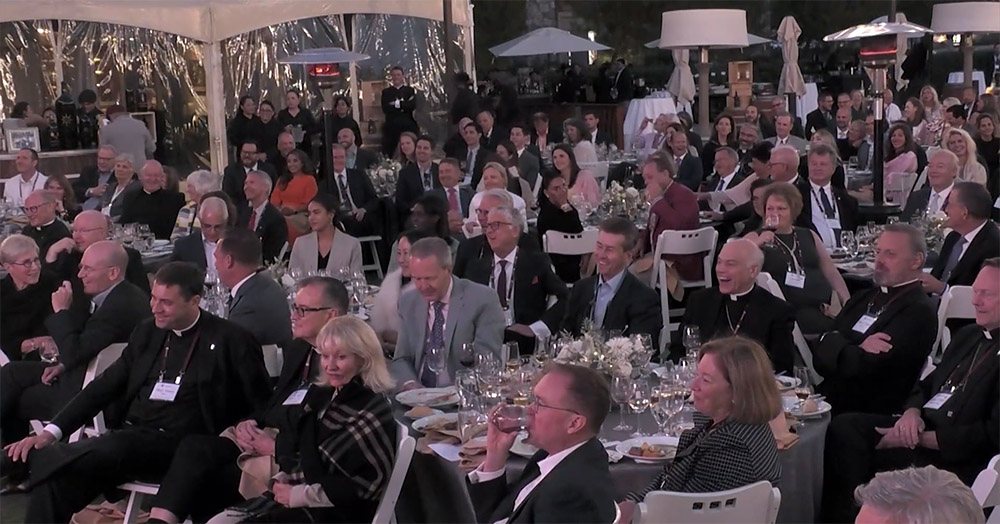 Barr said the anti-abortion movement will need to "win hearts and minds" over time in 50 separate political forums.

"I am afraid that people might look at this as a mandate to go out and push our optimal solution nationwide and then we open ourselves up and we show an area of weakness where we don't command the support of a large group of American citizens," Barr said. (He was speaking days before voters in Kansas rejected a ballot measure that would have allowed the Republican-led state legislature to ban abortion.)

Others offered a more ambitious and less-patient outlook on banning abortion outright across the country. Rose predicted a "red wave" — a Republican takeover of Congress in this year's midterm elections that she hopes will be the precursor to President Joseph Biden, a Catholic Democrat who supports abortion rights, being ousted in 2024 and replaced by a president who will sign a national abortion ban into law.

"States should not be deciding who lives and dies. Democracy should not get to vote on whether a child is killed in the womb or not. That's a right to life that's fundamental that that child has. That's a constitutional right to life," Rose said.

Other commentators, like Busch, said that their ultimate vision is for the federal courts to extend, to the moment of conception, the 14th Amendment's guarantee of citizenship and equal protection under the law. 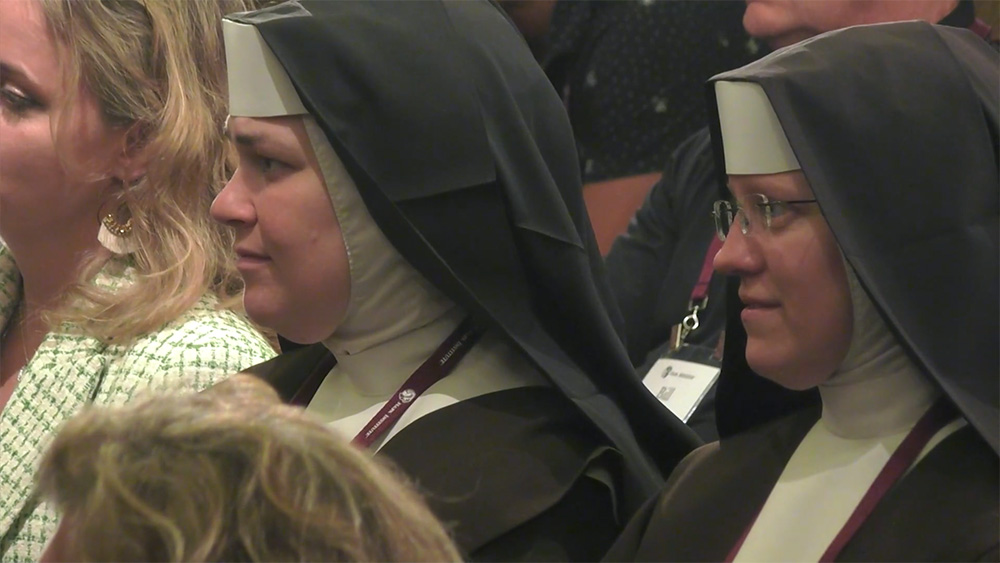 Two women religious listen to a panel discussion on what the future holds for the anti-abortion movement during the Napa Institute's annual summer conference, held July 27-31. (NCR screenshot)

"The so-called civil right of abortion is gone, and we now must have civil discourse with our fellow Americans about what abortion is truly doing to our country," Busch said.

Ryan Anderson, president of the Ethics and Public Policy Center, said in one panel exchange that Christians have "an obligation" to push for laws in all 50 states and at the federal level to eliminate abortion. He said the conservative legal movement is divided over the question of extending the 14th Amendment to the zygote or fetus, but called that idea "a promising line of future development."

Anderson sat alongside Barr for the former attorney general's interview-format talk on July 30. Responding to Anderson's questions, Barr said the United States Constitution is "premised on the foundation of Christianity" and "presupposes a robust people that is animated by Christian moral values."

Barr suggested that public education today is "at war" with religious beliefs. He also critiqued secular culture, mentioning critical race theory, transgenderism "and the pastiche of all these bizarre -isms that are out there."

Though some Catholic leaders criticized Barr for reviving the federal death penalty in 2019, Anderson commended the former attorney general as "a patriotic American, a faithful son of mother church and a loyal public servant." Anderson thanked Barr for his time and dismissed the activists who disrupted his talk as "knuckleheads."

Near the end of their talk, Anderson said he could have spoken with the former attorney general all night if time had permitted, but he added: "There are cigars and wine to be smoked and drank."

A version of this story appeared in the Aug 19-Sept 1, 2022 print issue under the headline: Napa Institute conference focuses on banning abortion nationwide.