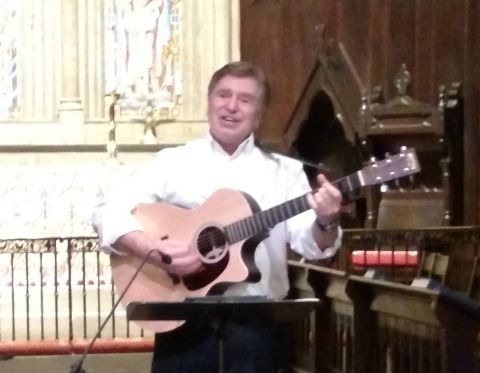 Kansas City, Mo. — Dan Schutte, the noted composer of church music, brought a message of hope, mercy and the power of community in a concert of song and spoken word April 28 in Kansas City, Missouri.

A reoccurring theme for the two-and-half-hour concert was captured in an apocryphal story Schutte told about tax-collector Zacchaeus, who, according to story, continued for decades to visit the tree where he first met Jesus.

Zacchaeus would sit at the base of tree and simply recall his encounter with Jesus. "Somehow in the remembering, I get hope and strength and faith in my life," Schutte quoted Zacchaeus as explaining why he visited that sycamore tree every day, year after year.

"It was [for Zacchaeus] one of those spectacular moments of God's grace" that we also can experience when we open ourselves up to God, Schutte said. "Hold on tight to those moments of spectacular grace and remember how God came close to each of us," he said and then began singing one of his best-known hymns, "Here I Am Lord."

About 400 people attended the event, a benefit for the Kansas City, Missouri, and Kansas City, Kansas, chapters of the National Association of Pastoral Musicians.

In the 1970s and '80s, Schutte was part of the liturgical group the St. Louis Jesuits. He is now composer-in-residence at the Jesuit-run University of San Francisco and travels extensively, giving talks, parish retreats and workshops. Prior to coming to Kansas City, he had preached a five-day parish mission in Seattle. Schutte is also a member of the NCR board of directors and came to Kansas City for our spring board meeting.

The Kansas City concert, however, did not happened without a snag. It had to be moved to an Episcopal church, after Bishop James Johnston of the Diocese of Kansas City-St. Joseph, Missouri, prohibited Schutte from appearing in a Catholic parish, because, the bishop said, the composer didn't have "a letter of suitability" from his home diocese.

The only reference to this contretemps was in Schutte's opening remarks when he said, "I want to thank the people of St. Paul's [Episcopal Church] who, when we could not do this in our original space, invited us here."

Schutte played old and new songs and the gathered — who were, after all, predominantly musicians — enthusiastically joined. In between, he shared stories and reflections on topics like hope, Easter and community.

Introducing his song "Holy Darkness," for example, he said, "Because of God's love, we can take these darkest moment in our lives — moments we've all experienced at one time or another — and experience them as holy."

Introducing his song "City of God," he said, "One of the greatest gifts in our journey of faith is that we don't have to do it alone. ... We [journey] with the support of our brothers and sisters."

"Many of you here do that in spades for the people of your communities — as priests, faith formation directors and parish workers. Thank you so much for that," he said.

After 45 years of music, a final concert for the St. Louis Jesuits

Additions to the family

Editorial: We need bishops to stand up to spread of fake news