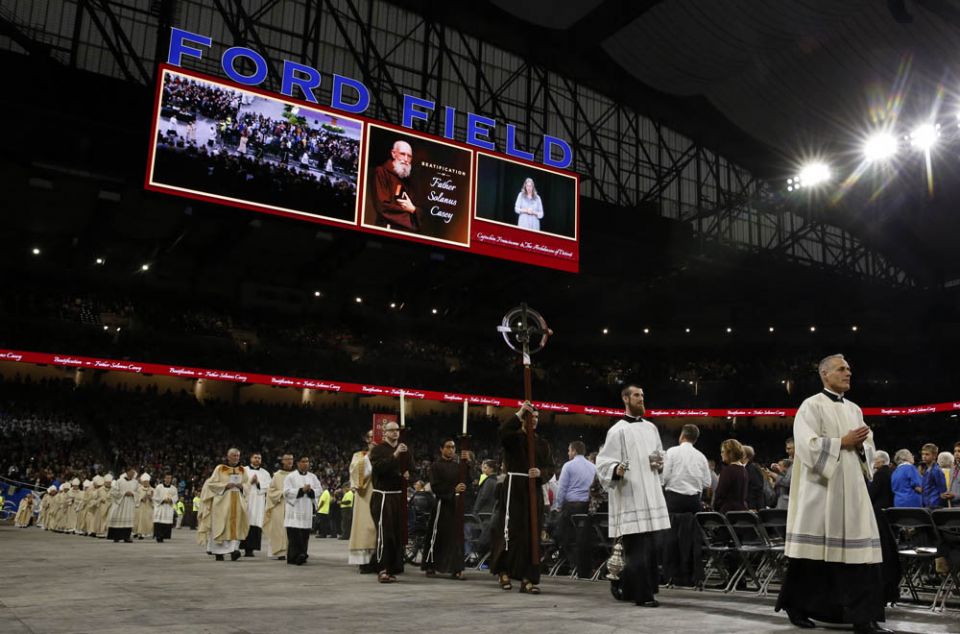 "Don't call me a saint, I don't want to be dismissed that easily." Dorothy Day's sublime statement expresses the reality that some saints are regarded as pious, hagiographical characters, rather than an example of personal conversion. Part of me fears that the life of Blessed Capuchin Fr. Solanus Casey might become a toothless abstraction rather than the model of gratitude, compassion and mercy, which is desperately needed by the American church.

"Blesseds" in particular places and canonized saints universally can be both channels of grace and embodiments of Christian virtue. Men and women on the path to becoming canonized saints have demonstrated heroic virtue, and give us a path to follow Christ in our time. By overcoming disappointment, chaos and suffering, Solanus Casey challenges us to follow Christ and serve our neighbor through healing, gratitude, and openness.

Solanus Casey's early adulthood was marked by vocational disappointment. Young "Barney" Casey was engaged to be married before his fianceé's father disapproved of Barney and broke off the engagement. Barney's first attempt to become a priest in Milwaukee was thwarted by his lack of facility with the German language. Solanus found the high road through disappointment to fulfillment with the Capuchin Franciscans, an order whose unkept beards he initially found repulsive. Disappointments continued for Solanus, even after he joined the Capuchins. As a "simplex priest," he did not have permission to preach doctrinally or hear confessions. Showing the grit of American resolve, Solanus did not blame others or wallow in self-pity.

Solanus was open to the ministry of porter, embodying a line from Alessandro Manzoni's classic novel, The Betrothed (I Promessi Sposi): "Such was the condition of the Capuchins, that nothing appeared to them either too high or too low." His ministry at both Sacred Heart in Yonkers, New York, and St. Bonaventure Monastery in Detroit, was opening the door for visitors to the monastery, a highly unusual ministry for a priest. Solanus resolved any thoughts that being a porter was beneath his dignity and fully invested himself in the ministry. By striking a balance between work and prayer, Solanus flourished as the doorkeeper, and many of the seeds he planted have flourished in the past 60 years, including Detroit's Capuchin Soup Kitchen.

Marcia Lee, who works as part of the Detroit Capuchins' Justice, Peace, and Integrity of Creation Ministry, gave me a tour of the neighborhood near St. Bonaventure. Lee remarked that "Solanus did not determine who came to his door, he just welcomed whoever came." Solanus' openness to others, knowing or not knowing the difficulties they carried, allowed him to show compassion to thousands of people.

Jesuit Fr. James Keenan defines mercy as "the willingness to enter into the chaos of another." The chaos of others is constantly encroaching upon the relational fences that we construct in our lives. Through his work as a farmer, log-jammer, prison guard, trolley conductor, and his Capuchin Franciscan formation, Solanus became familiar with chaos. Fr. Solanus is an example of fearless mercy, which breaks through the epidemic of isolation that has harmed many young Americans.

The day before Solanus' beatification several Capuchins and I made a pilgrimage to Detroit for the event. We ate breakfast at Charlie's restaurant outside Detroit. Several people, including a 7-year-old junior iconographer with an illustration of Fr. Solanus, greeted us at Charlie's and shared stories of overcoming suffering with the Solanus' help. During the meal, Br. Scott Leet commented that the elaborate and failed attempts of human beings to avoid suffering only make us more miserable. Despite our relative wealth and access to resources, Americans still struggle with fear of both physical and psychological suffering. When suffering does inevitably visit our lives, we struggle to make it meaningful. 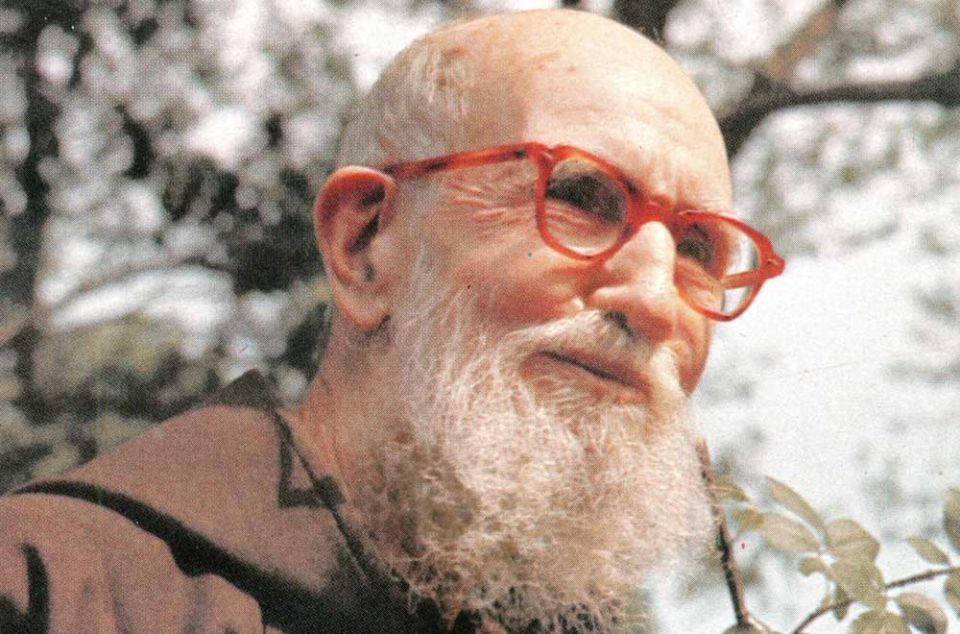 Solanus Casey also suffered mightily toward the end of his life. From 1946 to his death in 1957, he suffered from erysipelas, a painful skin condition. Paula Medina Zarate, the recipient of the verified miracle necessary for Solanus' beatification, was healed from a life-long skin disease after praying at the tomb of Fr. Solanus. Solanus did not seek to flee from pain or distract himself from suffering. For Solanus, suffering was a way to connect with the crucified Lord.

"Thank God ahead of time," was his counsel to the people who sought him. Through gratitude, Solanus found a path through vocational disappointment and physical disease. "Gratitude," said Fr. Solanus, "is the sign of a rational mind." The life of Solanus illustrates the connection between gratitude and restoring mental health after setbacks. Solanus wisely built his house on rock of gratitude that not only endured disappointment and suffering, but integrated those difficulties into a house of healing for others. 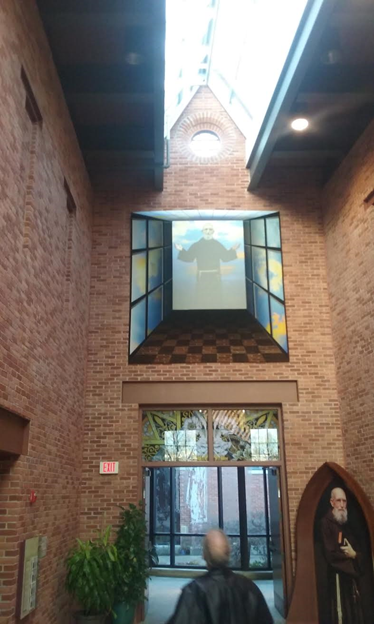 Image from the Solanus Casey Center in Detroit (Erik Lenhart)

Disappointment and disillusionment have marked the lives of millennials, while teenagers likewise struggle with sky-rocketing levels of anxiety and depression. Blessed Solanus Casey is a symbol that God desires healing for people in every possible way. Solanus' faith transformed suffering into empathy and compassion and allowed him to be a conduit for God's healing power. While the Lord offers gratuitous and generous healing, we are only able to offer healing to the degree in which we have received it. Nemo dat quod non habet.

There is a stunning image in Detroit's Solanus Casey Center that is somewhat of an optical illusion. The image appears to be both simultaneous going out and inviting the eye of the observer into an open-armed Solanus. Decades before Pope Francis' salient image of the church as a field hospital, Solanus was opening the door for healing to all who sought him. At the close of the beatification, Archbishop Allen Vigneron of Detroit stated to thunderous applause of 65,000 that, "The field hospital of mercy is open here in Detroit."

Every human life is marked by the need to heal from something: disease, loss, divorce, disappointment, depression, anxiety, disillusionment and despair. Through word, deed, and heroic virtue, Blessed Capuchin Fr. Solanus Casey gives us a simple path through these our difficulties: if you want to be healed, be open and be grateful.