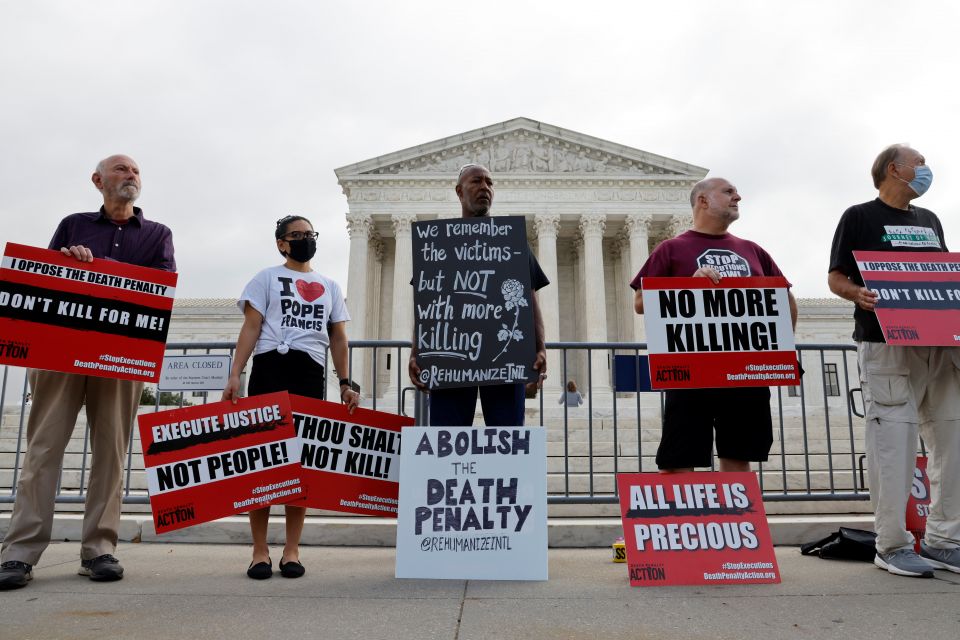 WASHINGTON — Catholic leaders are encouraging people of faith to get involved in lobbying efforts against capital punishment and to discuss the issue in their parishes and with family members.

Two recent webinars on this topic have brought this message home to Catholics around the country.

On Jan. 27, Catholic Mobilizing Network hosted a webinar, "Ending the Federal Death Penalty: The Road Ahead," and on Feb. 1, Renew International and the Archdiocese of Washington hosted: "Dignity and the Death Penalty: A Conversation with Cardinal Wilton Gregory and Sister Helen Prejean."

The panels emphasized not only the Catholic Church's stance against capital punishment but the need for people of faith to step up and do their part to help bring an end to this practice in the U.S.

"This is a pivotal moment," said Ingrid Delgado, policy adviser in the Office of Domestic Social Development for the U.S. Conference of Catholic Bishops. She reminded viewers Jan. 27 that 44 people are currently on federal death row and that President Joe Biden campaigned on a promise to end the federal death penalty.

She said the anti-death penalty bills in Congress particularly need Republican support "to show this is a bipartisan issue." She also noted that the Federal Death Penalty Abolition Act, introduced last year, "has a slim chance of passing right now. "

"But we're people of faith and hope; we can and will get there," she said.

Delgado urged people to sign Catholic Mobilizing Network's online petition asking Biden to end the death penalty found here. She also asked them to contact members of Congress about the issue and bring it up with state legislators if their state still has the death penalty.

But the work doesn't have to end there. She also urged webinar viewers to "think of your circles of influences" — such as parishes — and get this topic going there.

That was the emphasis of the Feb. 1 panel with Washington Cardinal Wilton D. Gregory and Sister Helen Prejean, a Sister of St. Joseph of Medaille, who is a longtime advocate for ending the death penalty.

Cardinal Gregory said pastors should form social justice ministry teams with parish leaders who can engage parishioners on the consistent ethic of life. He also said discussion on this issue can be difficult as people have strong feelings about it, and emphasized that dialogue needs to be in Christian charity with a focus on listening to each other.

"Be kind, especially in the start of this dialogue. This will move the hearts of the faithful," he said, stressing the same approach also is needed when discussing this issue with family members who disagree on the issue.

"These conversations can be uncomfortable and painful," he noted, but that doesn't mean they should be avoided.

Sister Prejean is used to such conversations and said that when she is invited to parishes to talk about the death penalty, she tells stories about the men she has visited on death row.

She also has recounted conversations with a man whose son was shot and killed. She said he was "eaten alive with anger and was losing himself in it" before he learned to forgive, which he said ultimately saved his own life.

She reiterated what she has frequently said about those on death row: that they are "more than the worst thing they've ever done."

Sister Barbara Battista, a Sister of Providence of St. Mary-of-the-Woods, Indiana, had a similar message in the Jan. 27 panel. Sister Battista, a member of the Terre Haute Death Penalty Resistance, which mobilizes against federal executions, accompanied two men at their federal executions in 2020.

She said William LeCroy, who was executed Sept. 22, 2020, "was not at all the man who had committed murder years before," which she said shows that "healing and reconciliation can happen." In the years before his death, he became deeply spiritual, she added.

Just hours before his execution, his lawyers made an unsuccessful plea to the Supreme Court to issue a stay.

On Jan. 27, the day of the one of the webinars, two executions took place in the United States, both after getting clearance from the Supreme Court, which did not issue requested stays.

Reeves had requested, and was denied, the possibility of execution by nitrogen gas.

Grant and another death-row inmate had asked a federal judge to grant them a temporary injunction that would delay their executions until a trial could be held to determine if Oklahoma's use of the three-drug injection protocol was constitutional. They had asked to be killed by firing squad as an alternative, arguing that it would be quicker and less painful.

Catholic Mobilizing Network responded on social media to the executions of Grant and Reeves, the first executions in the U.S. this year.

Of Grant's execution, the group tweeted: "Every human life is bestowed with God-given dignity, even the lives of those who have caused grave harm. #DonaldAnthonyGrant is a child of God, and we lament that the state of #Oklahoma is choosing to move forward with his execution."

As for Reeves, it said in a tweet that his execution that night "represents a legal system that allows violence to serve as a cheap replacement for true justice. Executions contribute to a culture of death and draw us further away from a culture of reconciliation."

Exclusive: Dolan sends book on 'The Next Pope' to cardinals around the world

Stressed out Anglican priests turn to trade unions for support