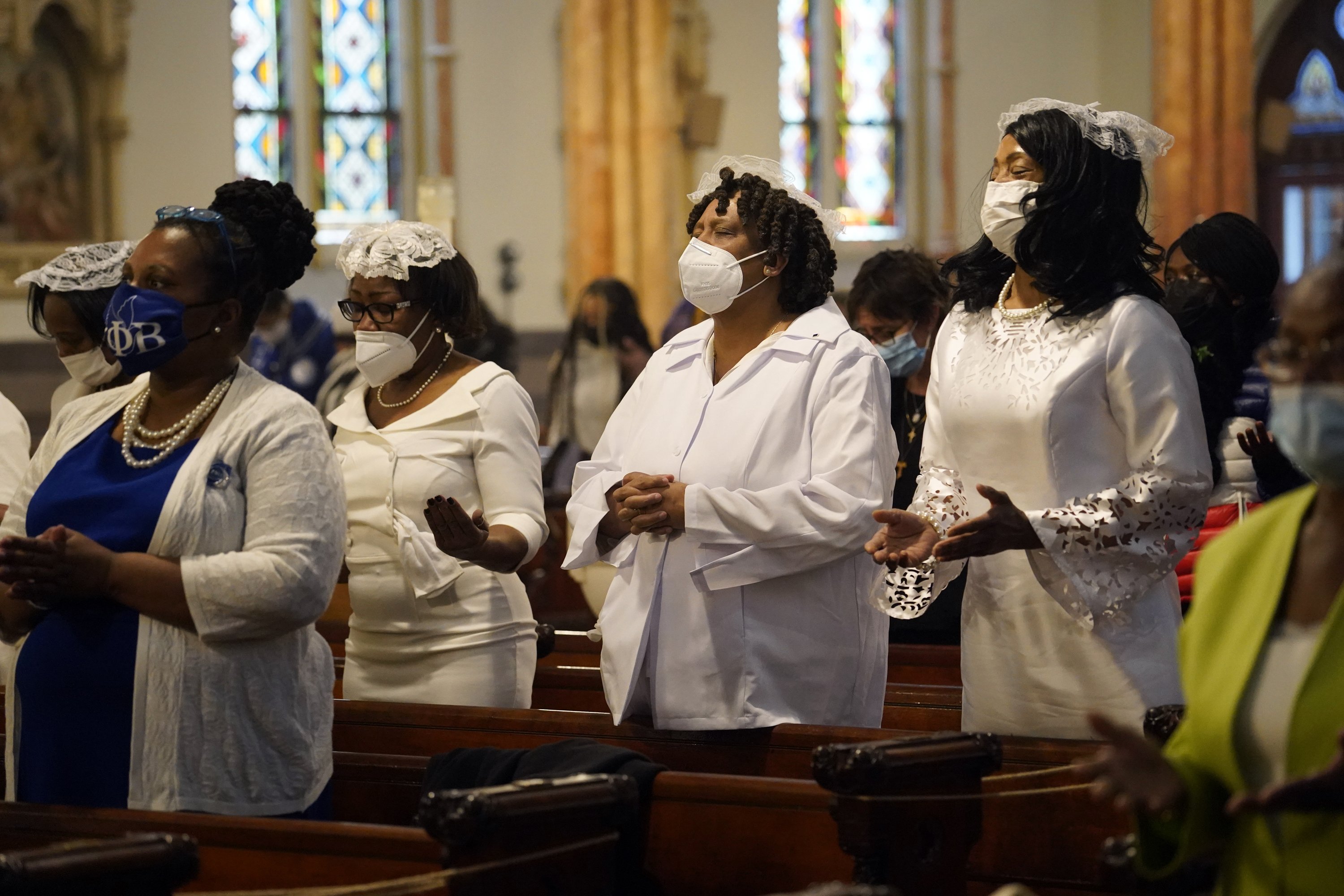 Members of the Ladies Auxiliary of the Knights of Peter Claver pray during a Mass marking Black Catholic History Month Nov. 21, 2021, at Our Lady of Victory Church in the Bedford-Stuyvesant section of Brooklyn, N.Y. (CNS photo/Gregory A. Shemitz)

The history of Black Catholics and other marginalized people in the U.S. church covering more than two centuries is one worth knowing and can guide the church's response to the challenges of racism and social justice, historian Shannen Dee Williams believes.

Addressing the online opening session of the annual Catholic Social Ministry Gathering Jan. 29, Williams explained that the journey of how people who are often overlooked have influenced church history deserves more than a footnote in historical record.

The gathering convened online for the second consecutive year because of the coronavirus pandemic, addressing the theme "Justice at the Margins."

Williams, associate professor history at the University of Dayton, focused her comments on the history of Black women religious, who faced racism within the church from religious congregations and clergy. She highlighted the lives of Mother Mary Lange and Sister Thea Bowman, who have the title "Servant of God," and Venerable Henriette Delille, all of whom withstood discrimination as they carried out their call to a religious vocation.

She called on attendees to learn, as she did over the past 15 years, about the history of Black Catholics since early in the founding of the United States.

Williams confessed it was a history she knew little about until she began researching a topic during graduate studies.

Growing up and throughout her schooling, Williams admitted that she was not interested in Black Catholic history and, although she was a lifelong Catholic, she had never seen a Black woman religious.

"In fact, the only Black sister that I knew at the time was Sister Mary Clarence, the fictional character played by Whoopi Goldberg in the critically acclaimed 'Sister Act' franchise," she said.

But while searching for a topic on which to focus her graduate work, Williams came across a story about the formation of the National Black Sisters' Conference in 1968. She excitedly called her mother later in the day to discuss her discovery.

Williams recalled that her mother was unaware there were Black nuns serving the church.

In the course of her research, Williams soon learned about the rich history of Black women who endured discrimination within the church and religious congregations in their attempts to live a religious vocation. She also found stories and documents about the Black Catholic experience overall. The more she read, the more she wanted to learn more.

"One of the powerful of those myths was my belief that Black Catholics were footnotes in the story of the development of the U.S. Catholic Church, that the story of the Black Catholic community did not become significant until the 20th century, when their numbers grew significantly as African American Southerners migrated to Northern, Midwestern and Western cities and converted to Catholicism," Williams said.

Her research led to the revelation that Black Catholics are as much a part of the story of the American Catholic Church as are Europeans.

Since then, Williams said, her work as been "grounded in the fundamental belief in the transformative power and possibilities of Black historical truth-telling in the fight against racism and white supremacy."

Williams invited attendees to bring justice to the margins by undertaking a series of actions that promote racial equality. One step is to pray to end "individual and institutional racism and the toxic reality of anti-Blackness," she said.

A second action would be to "always educate ourselves" through a reading club that includes books on anti-racism and the diversity of the American Catholic Church and inviting speakers to address Black Catholic history.

Learning about the history of diverse communities will help address racism while promoting understanding and equality, Williams said.

Williams also called on Catholics to be "intentional" in supporting racial justice causes through actions such as special collections for historically Black Catholic schools and others serving marginalized people; scholarships and fellowships for descendants of enslaved and colonized people; and programs addressing mass incarceration, environmental racism and voter suppression.

"For me, the possibilities of racial justice, of reconciliation and peace are only possible through this ongoing power of Black Catholic historical truth-telling," she said.