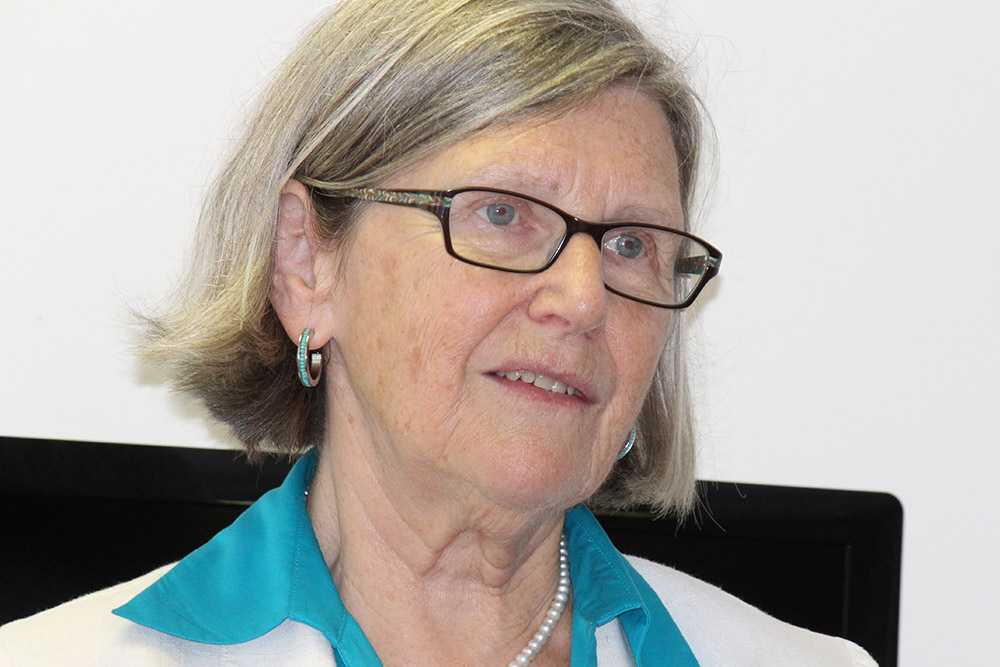 Social Service Sr. Simone Campbell, the former executive director of the Catholic social justice lobby Network whose advocacy for Obamacare was critical for the landmark law's passage in 2010, will be awarded the Presidential Medal of Freedom by President Joe Biden during a White House ceremony on July 7.

One of the highest honors that a civilian can receive, the Medal of Freedom is bestowed by the president to individuals who have made "an especially meritorious contribution to the security or national interests of the United States, world peace, cultural or other significant public or private endeavors."

Campbell, who left her position at Network in March 2021 after leading the organization for nearly 17 years, is the latest Catholic religious to receive the honor. Previous recipients have included Mother Teresa of Calcutta and Missionary Servant Sr. Isolina Ferré Aguayo.

"It's an affirmation of the work I've done, but it's also an affirmation of what [Biden] cares about," said Campbell, who told NCR that she learned she would receive the medal after getting a call from the White House on June 22.

A White House aide asked Campbell if she would hold for the president of the United States. A few minutes later, Biden answered, said hello and shared a story about how he once told Pope Benedict XVI during the Vatican's visitation of women religious in the United States to "quit picking on the nuns; they're much more loved than any of us."

Biden then asked Campbell if she would accept the Medal of Freedom. "Bring a friend, we'll have a reception afterwards. It will be great," the president told Campbell, who said she was overwhelmed.

"I have to confess. Tears sprang to my eyes," she said. "It was like, What? I was just shocked, literally. And then I said yes."

Campbell will be bringing family, friends and colleagues to the White House, including Colleen Ross, the communications director at Network, and Sr. Maribeth Larkin, general director of the Sisters of Social Service.

"Everybody is really excited about it," Campbell said.

Others Biden will be honoring with the Medal of Freedom during the July 7 ceremony include Olympic gymnast Simone Biles, former Congresswoman Gabby Giffords, Gold Star father Khizr Khan, and actor Denzel Washington.

Campbell, who is also a noted attorney and speaker well-versed in public policy issues and political organizing, used her talents and skills over the course of several decades to lobby for legislative and systemic changes to address wealth and income gaps in the United States.

In 2010, Campbell wrote a letter, signed by thousands of Catholic sisters, supporting President Barack Obama's signature health care law. Obama thanked Campbell for her efforts and invited her to the White House ceremony where he signed the Affordable Care Act into law.

The Nuns on the Bus tours garnered significant media attention and support from political leaders, including Biden. In 2014, Biden, then vice president, attended the Nuns on the Bus launch in Des Moines, Iowa, and even signed his name on the bus.

Campbell says she sees her being awarded the Medal of Freedom as an "affirmation" of what she and her fellow sisters did on behalf of the Affordable Care Act and with Nuns on the Bus.

"It's a reflection of how much symbolically Catholic sisters matter to him, as a Catholic, as a progressive, and as someone who cares about issues of poverty, family, health care and immigration," Campbell said.

Campbell spoke at the 2012 Democratic National Convention and offered the opening prayer for the convention's final night in 2020, when Biden accepted his party's nomination. She said Biden called her the next day from the campaign trail to thank her.

Related: Q & A with Sr. Simone Campbell on her year since leaving Network

Her activism on behalf of progressive political causes has brought criticism from more conservative corners in the church. Her lobbying for the Affordable Care Act, which included enlisting the support of the Leadership Conference of Women Religious, was followed by a Vatican censure of the LCWR in 2012 that specifically mentioned the group's partnership with Network. The U.S. bishops had opposed the health care law.

"The bishops got mad, and they weren't good sports about it," said Campbell, who added that in her post-Network life, she takes advantage of not having to be immersed in the daily strategy of lobbying and mobilizing for various public policy initiatives.

However, Campbell is still rather busy. She "sleeps in" until 6 a.m., and after her morning meditation and newspaper reading, Campbell works on a project to foster dialogue between progressives and conservatives. Titled "Understanding Us," Campbell said the initiative recently launched its website. She said a "test-run" for the project is scheduled for July 21, via Zoom.

"It's not for the sake of changing anybody's minds, but for strengthening understanding," Campbell said. "Because our concern is with this hyperpolarized society that we're in right now, we can sustain huge differences if we have a huge center, but nobody's been working on the center from what we can tell."

Campbell said it's been a challenge to convince conservatives to participate in the initiative, adding that many of them appear to be afraid or suspect that those with liberal views will just try to speak to them until they change their minds.

"It's so hard. I'm really concerned for who we are," Campbell said. "What is democracy going to be if we can't connect with each other?"

A version of this story appeared in the July 22-Aug 4, 2022 print issue under the headline: Campbell receives Medal of Freedom from Biden.