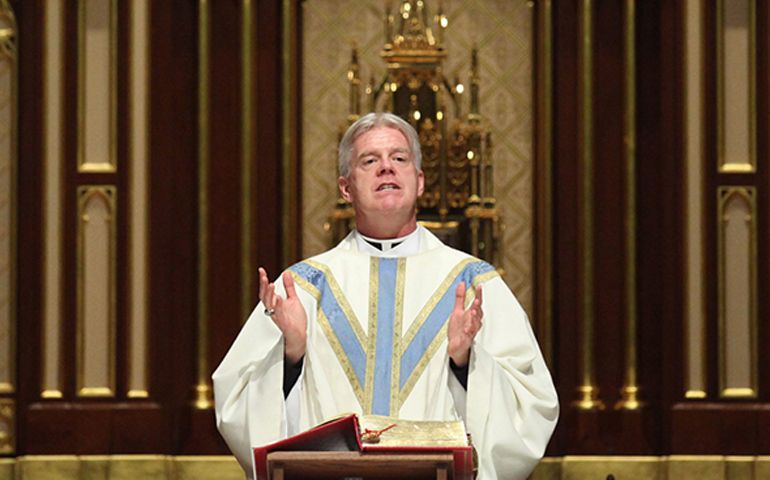 Fr. Warren Hall in a 2014 photo (Photo by Frances Micklow/courtesy of The Star-Ledger)

The Catholic archbishop in New Jersey has barred a gay priest from ministry because the cleric supports gay advocacy groups and has backed a Catholic high school counselor who was fired when church officials discovered the woman was in a same-sex marriage.

Fr. Warren Hall said he was notified by phone on that Newark Archbishop John Myers, an outspoken conservative who has submitted his retirement papers to Pope Francis, says Hall's actions are "confusing the faithful."

As a result, Hall will no longer be able to celebrate Mass in public, present himself as a priest or work in the New Jersey parishes where he has been ministering.

"The problem is that we have an archbishop who doesn't believe you can be gay and Catholic," Hall, who is on vacation, wrote in an email.

He also tweeted about the move Wednesday afternoon:

Sadly, my differences with my bishop continue. Today he has suspended me from priestly ministry. @Pontifex's Reform are taking too long.

Myers' issues with Hall go back to May of last year, when the archbishop fired Hall from his job as chaplain at Seton Hall University for a Facebook post in which Hall showed support for the anti-bullying "NOH8" campaign that encourages respect for gay people and gay rights.

Hall, who said he remains committed to his vocation as a priest and to his vow of celibacy, a few weeks later acknowledged that he is gay.

The Newark archdiocese said that was also a problem because "someone who labels himself or another in terms of sexual orientation or attraction contradicts what the (Catholic) Church teaches."

The tensions seemed to have eased two months later when Myers assigned Hall to assist at two parishes in northern New Jersey across the Hudson River from Lower Manhattan.

But Hall has continued to publicly back several gay groups and gay Catholics in particular.

He is set to speak next week to a New Jersey chapter of PFLAG, founded as a support group for parents and friends of gay people, and he has expressed support for the gun control group Gays Against Guns, the LGBT Community Center in New York and New Ways Ministry, a Catholic LGBT organization.

Hall said that in the phone call informing him of the suspension, Monsignor Thomas Nydegger, Myers' second-in-command, also cited Hall's support for an unofficial gay and lesbian ministry at the church's World Youth Day in Poland in July and his support for a guidance counselor who has sued the archdiocese for firing her over her same-sex marriage.

The woman, Kate Drumgoole, last month filed suit against Paramus Catholic High School -- where she was a guidance counselor and basketball coach until her dismissal in January -- and the archdiocese for violating anti-discrimination laws and intentionally inflicting emotional distress.

Lawyers for the archdiocese said she violated church teachings and the school's code of ethics when she married her partner.

In his email, Hall said he was "upset" by Myers' actions against him and that it would be hard to break the news to parishioners at Sts. Peter and Paul Church in Hoboken and St. Lawrence Church in Weehawken, where he has served for the past year: "They fully welcomed me after my firing from Seton Hall last year, they know my personal story and made me a member of the family.

"Since my firing from Seton Hall and coming out last year I felt an obligation to use this as an opportunity to more directly let people know of God's love for all of us and that gay Catholics should stay in the church and work for more wider acceptance," he wrote. "I do not feel I ever preached or taught anything contrary to the Gospel (and) this is true from my entire 27 years of ordination" as a priest.

A spokesman for Myers, James Goodness, said in an email on Thursday that the suspension was not about Hall's sexual orientation but about his public stands.

"Every Catholic priest promises to be reverent and obedient to his bishop," Goodness said. "A priest's actions and statements always must be consistent with the discipline, norms and teachings of the Catholic Church. When they are ordained, priests agree to accept the bishop's judgment about assignments and involvement in ministry."

In a statement lamenting Hall's suspension, Francis DeBernardo, executive director of New Ways Ministry, called Hall "courageous" and said "the archbishop is saying that his church fears associating with LGBT people – a fear which is contrary to the gospel."

Hall's ministry, DeBernardo said, "is in line with the church's own authentic teaching that its ministers must reach out to all those who have been marginalized. He is in line with Pope Francis' more pastoral and welcoming approach towards LGBT people."

Myers submitted his resignation to Francis in July when he turned 75, as required by canon law.

But the pontiff, who is reportedly overhauling the episcopal search process to find candidates in tune with his pastoral agenda, has not yet named a replacement.