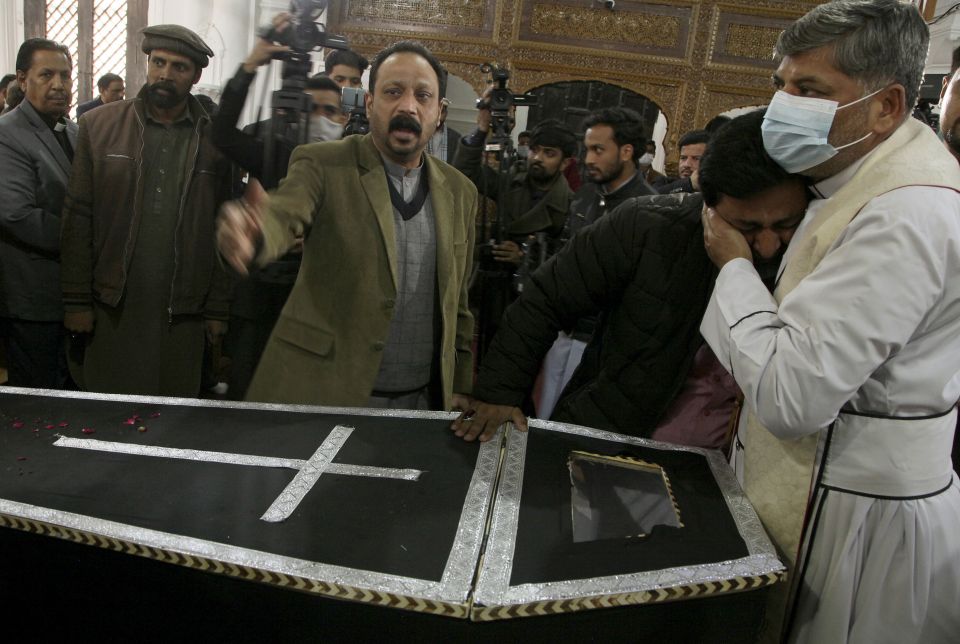 A clergyman comforts a relative of Christian priest Father William Siraj, 75, who was killed by gunmen, during his funeral service at the All-Saints Church, in Peshawar, Pakistan, Jan. 31, 2022. (AP Photo/Muhammad Sajjad)

PESHAWAR, PAKISTAN — Pakistani police widened their manhunt Monday for two unidentified assailants who shot and killed a Christian priest and wounded another the previous day in the country's northwest.

Father William Siraj, 75, was killed while on his way home after celebrating Sunday Mass in the city of Peshawar, the capital of Khyber Pakhtunkhwa province, which borders Afghanistan. One of his traveling companions, Father Naeem Patrick, was wounded while a third priest was unharmed in the attack.

The attackers fled the scene. No group has claimed responsibility for the killing.

Hina Jilani, chairperson of the Human Rights Commission of Pakistan, on Monday condemned the killing. In a statement, she said the commission sees the attack "as a blatant assault not only on Pakistan's Christian community but on all religious minorities whose right to life and security of person remains under constant threat." She demanded more steps for the protection of minorities.

Provincial police chief Moazzam Jah Ansari ordered investigators to utilize the latest technology and all available resources to ensure the arrest of the perpetrators.

Christians are a tiny minority in this predominantly Sunni Muslim country, where about half are members of the Church of Pakistan, a Protestant church. The other half are mostly Catholic. Militants in Pakistan have targeted Christians several times in recent years.

Overall, militant attacks have increased across Pakistan since the Pakistani Taliban ended a cease-fire with the government in Islamabad last month. The Pakistani Taliban, also known as TTP, have become emboldened by the Afghan Taliban's sweep to power in the neighboring country in mid-August.

On Monday, the Pakistani Taliban took to Twitter to claim the killing of police officer Moeen Asif, whose body was found in a deserted area near the garrison city of Rawalpindi a day earlier. Police since Sunday had been trying to determine who was responsible.

Pakistan's most senior clergyman, Bishop Azad Marshall, condemned the attack on the priests on Twitter and demanded protection for Christians. "We demand justice and protection of Christians from the Government of Pakistan," he wrote following the attack.

Additional policemen were deployed around Peshawar's All Saints Church, where a memorial service for Father Siraj was attended by more than 3,000 mourners on Monday. The memorial service was held at the same church that was attacked by militants with bombs and gunfire in 2013. Over 70 worshippers were killed and 100 were wounded in that attack, one of Pakistan's worst targeting Christians.

Fox wins top award for his work at NCR