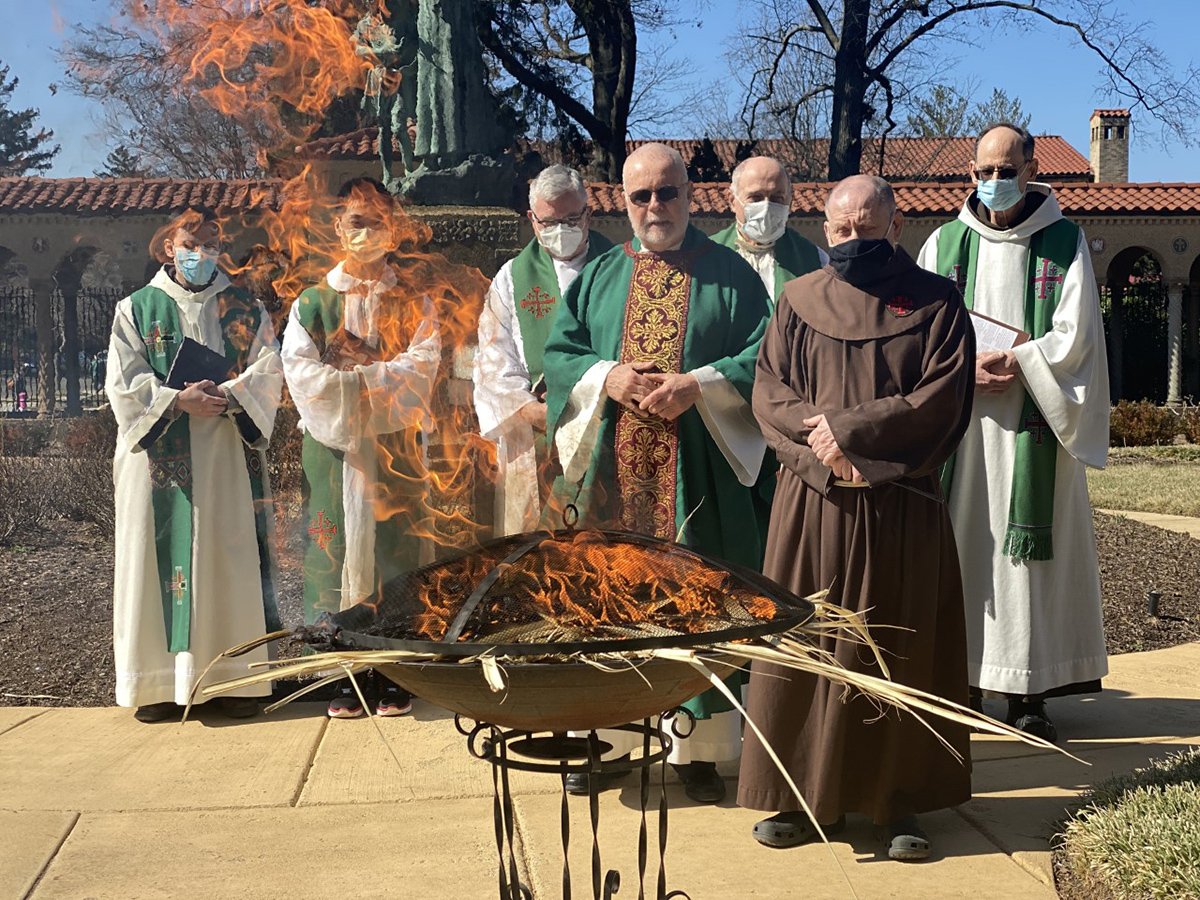 A group of friars from the Franciscan Monastery of the Holy Land in Washington look on Feb. 27, 2022, as a fire burns out after turning last year's Palm Sunday palms into ashes. (CNS photo/Rhina Guidos)

WASHINGTON —  Among the world's supply shortage, add to it the palm frond.

Rules to contain the spread of the coronavirus limited the number of people attending Holy Week celebrations such as Palm Sunday around the world in 2020 and 2021. That meant fewer palms to burn to provide the ashes smudged on people's foreheads on Ash Wednesday, the beginning of Lent.

At the Franciscan Monastery of the Holy Land in Washington, which was closed to the public for Holy Week celebrations the past two years, friars invited the public to see the burning of fronds Feb. 27, which included fronds from 2019.

There were so many restrictions in place during the first two years of the pandemic that it was hard to tell when Ordinary Time ended and Lent began, Father Jim Gardiner, a Franciscan Friar of the Atonement, said in a homily prior to the burning of the palms.

"The one just seemed to morph into the other," he said. "This year it's a bit different."

With Catholics in most places in the U.S. returning to some semblance of a pre-pandemic Lent season, Father Gardiner offered some suggestions to "get us in the mood for Lent," to see the traditional practices of Lent — prayer, almsgiving and fasting — through a different prism.

"For prayer, try the equivalent of quiet sitting," he said. "Sit comfortably, turn off or tune out all but unavoidable distractions and simply listen for three to five minutes. If you feel the need for a word or two, say 'Speak, oh Lord, your servant is listening.'"

When it comes to fasting, traditionally associated with food, "give up gossip or frivolous conversation or the use of a word you're not proud of, or refrain from talking down to others or talking bad about others," he said.

And when it comes to almsgiving, "don't hold back on material offerings," he said, but also give people your time and compassion, such as "telephone time to a shut-in or making that call even though you know full well that it's the other person who should be calling you first."

Returning to customs and practices may take some getting used to again, but "it's time to get ourselves in the mood for Lent," he said. "The kind of Lent that results in observable and detectable and, more or less, permanent change for the better. The question for us today is not so much, are we ready? But how ready do we plan to be?"