by Heidi Schlumpf
People
Vatican
This article appears in the Francis at Five Years feature series. View the full series. 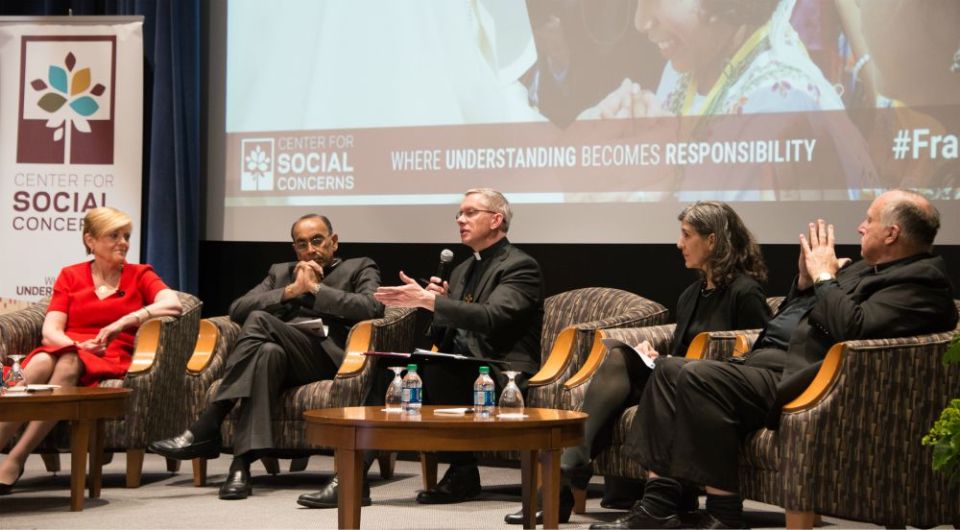 Notre Dame, Ind. — Among the plethora of events commemorating five years of Pope Francis' pontificate this spring, the one at the University of Notre Dame aimed to focus on his contributions to Catholic social teaching on peace, the poor and the planet. But another "P" also kept coming up: polarization.

Although Francis remains popular, controversy about his pontificate is real, especially among inner-circle Catholics deeply invested in the church, said speakers at the April 3 event, sponsored by Notre Dame's Center for Social Concerns.

Much of that polarization is the result of Francis' "new lens" on the church's social teachings that reflects the experience of the church in Latin America, said San Diego Bishop Robert McElroy in his keynote address. Catholics in the Global South, he pointed out, represent at least two thirds of the universal church.

"Thus the real complaint of many critics of Pope Francis is that he brings the perspective of the majority of Catholics, rather than the minority, to bear on social teaching," he said.

McElroy sees "fundamental continuity" in Francis' teachings, but identified several ways this pope's perspective is different, including his use of an inductive methodology that starts with experience and applies the Gospel to that reality. This "see-judge-act" method has been central to the church in Latin America, he said, in part, because it is accessible to all people.

Another part of Francis' new lens is his emphasis on the theme of marginalization that has become outright exclusion. "In Pope Francis' very memorable terminology, such people are 'throwaways,'" McElroy said, citing as examples hungry children, the unborn, the undocumented, those affected by racism and "young white non-college educated men and women who have seen their hometowns and their expected livelihoods destroyed by globalization."

Such exclusion is rooted in "grave inequalities of power, wealth, education, race and culture," McElroy said. "It is precisely because exclusion is tied inextricably to these levels of inequality that Pope Francis views radical inequality as a moral curse, and an enemy of human dignity."

Also contributing to polarization around this pope is his application of a consistent ethic to all social issues, including family and gender, said panelist Julie Hanlon Rubio, professor of Christian ethics and of women's and gender studies at St. Louis University. Rubio is a member of the NCR board of directors.

This methodological shift toward a consistent ethic is evident in "Laudato Si', On Care for Our Common Home," Pope Francis' encyclical on the environment, and in Amoris Laetitia, his document on the family, Rubio said.

"The real complaint of many critics of Pope Francis is that he brings the perspective of the majority of Catholics, rather than the minority, to bear on social teaching."

In the former, he moves teaching from dominion to stewardship, emphasizing our responsibility to future generations. In the latter, Francis repeats traditional teachings but also stresses welcoming those who fall short of the ideal. In both cases, he leaves the practical specifics to those at the local level, Rubio said.

"This combination of challenge, refocusing and complexity is exciting for many, but troubling for some," Rubio said, noting that he is not the first polarizing pope.

"The only difference is that now opposition is coming primarily from the right rather than the left," she said.

Although Francis could do more on LGBT persons' and women's issues, he has made progress in convincing Christians and non-Christians that the church aspires to be a "church for the poor," Rubio said.

"Though little in his social teaching is completely new, the choice of what to say frequently and what not to say at all speaks volumes about priorities," she said.

So do the pope's actions, said panelist Anne Thompson, an NBC News correspondent who has covered Francis.

She told stories of witnessing the pope's "gospel of gestures" during his travels, when he often shares meals with people who are homeless. "He pretty much just listens," said Thompson. 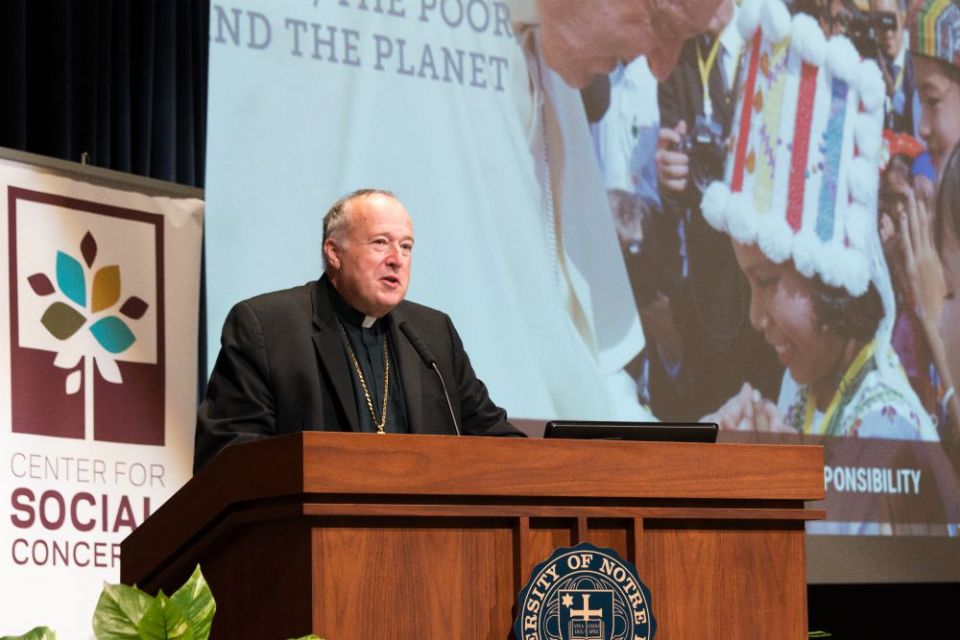 Panelist Anantanand Rambachan also praised the pope's movements on interreligious dialogue, comparing him to Swami Vivekananda, who first introduced Hinduism to the United States and called for religious tolerance at the 1893 Parliament of the World's Religions in Chicago.

Yet Rambachan challenged the pope's frequent connection of interreligious dialogue with evangelization. "How can one be committed to diversity as a religious good if his ultimate aim is evangelization," asked Rambachan, professor of religion at St. Olaf College in Minnesota.

Responding to questions posed by Notre Dame students before the event, speakers stressed dialogue — especially with those who think differently — as necessary to address the polarization around the pope and in the broader culture.

Rubio called for universities to teach how to talk across lines of division. McElroy said the Latin American church offers a model in base communities, but with a twist: the people must be from different backgrounds.

Personal narrative is the solution to the polarization and partisanship that has infected the church and culture, he said. For example, the San Diego Diocese has 200,000 undocumented immigrants, but also some Catholics very concerned about illegal immigration.

"If you get them in the same room to talk to each other, the partisanship tends to fall away as you see how the issues affect people," McElroy said.

On capitalism, women, the Amazon — a world of Catholic conversations