Pat Buchanan: a smile and an uppercut that stings 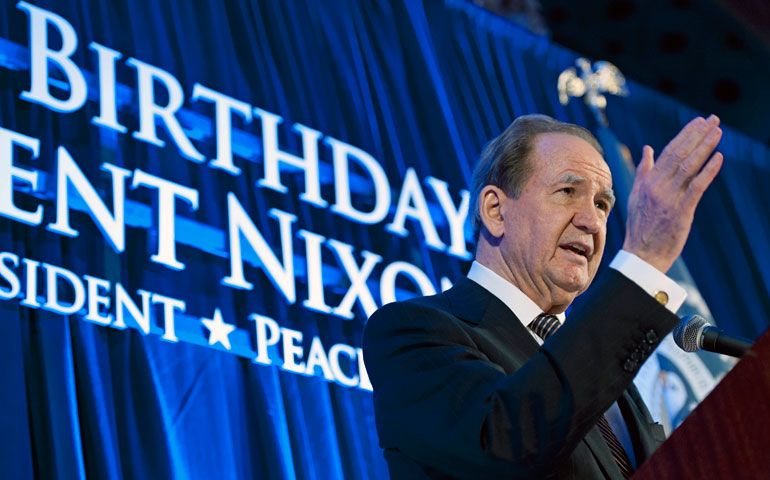 Pat Buchanan has returned, offering his 12th book: the well-written The Greatest Comeback: How Richard Nixon Rose From Defeat to Create the New Majority. Slightly painful as it is to confess, I admire Buchanan. Not for his flippant deriding of gays as "sodomites" or spouting that AIDS was nature's "awful retribution" for homosexual behavior. Not for his feeding the devious appetites of Nixon, whether guiding his master along airport rope lines or putting words in his mouth as a speechwriter. Not for his views that "secular humanists" have succeeded in "de-Christianizing" America. Not for his brackish belief that "immigrant invasions imperil our country and civilization."

I'm willing to gulp and let all that and more pass. Suavity is not one his strengths. Besides, who doesn't have a bad day now and again, or, in Pat's case, a bad decade or two? Compensating for his negatives are two positives: comedic bents that let him laugh at himself and the persistence of staying in the ring -- taking and giving uppercuts and rising after knockdowns.

I purposely use the boxing metaphor. In the Buchanan household in northwest Washington, D.C., young Pat had a tough-guy dad whose political heroes included Spanish dictator Francisco Franco and Wisconsin Sen. Joseph McCarthy. The father laced up his sons with boxing gloves and set them to pounding a punching bag in the basement -- all in the name of developing their manhood, of course.

The lesson took. As a student at Georgetown University in 1959, Pat was still punching. And kicking and cursing at the police when they gave him a traffic ticket one night on O Street. The minor melee led to a fine and a misdemeanor. Georgetown suspended Pat "the Hothead" for a year, the Jesuits graciously taking him back and hoping for the best after his graduation.

In one instance, it wasn't to be. In a 1997 column, he was still punching and swinging at the Georgetown Jesuits for daring to "call themselves a Catholic university."

One offense was removing crucifixes from classrooms.

Pat's pique is understandable, pine as he does for the pray, obey and stay Catholicism of yore. In Right From the Beginning, he recalls that the Buchanan children were " 'raised Catholic' in the '40s and '50s in a militant and triumphant Church in the days of the Legion of Decency and Pius XII; we grew up when the Faith was unquestioned and patriotism unconstrained ... and Vatican II was only a gleam in the eye of Monsignor Roncalli."

Pat's life-altering moment came in the 1950s, when he caddied for then Vice President Nixon at the Burning Tree Golf Club in Bethesda, Md. No women were allowed on the property except at Christmas, when they could buy gifts in the pro shop for their husbands. The friendship that began on the fairways of Burning Tree would take the caddy to the White House as Nixon's most treasured and loyal aide.

In a sterling career in both print and broadcast media, serving in the Ford and Reagan White Houses, and running three times himself for president, Buchanan has used his gifts well -- rough-hewn as they sometimes are. Easily, he's my favorite conservative, if spiritedness matters. Politically, he can sound like Ralph Nader when he goes after boardroom criminals and military excesses, and damns the two-party system as "a snare and a delusion, a fraud."

My pride swells a bit when saying that I've survived a few of the Buchanan roundhouses. When I was a guest a couple of times on "Crossfire" in the 1990s, Pat said I was addled for my advocacy of pacifist solutions to conflicts, that I had lost contact with reality. In 1994, he told the Los Angeles Times that I was "a likeable guy, but I think his views are heretical. Even the pope now says people have an obligation to use force if necessary."

Worse, I was practicing "a doctrine of freeloading. The U.S. is protected by people who risk their lives so that Colman can stand in a classroom and say they are doing unjust and immoral things. It's because [the military] and the police are willing to defend us on a daily basis that Colman is free to stand up and preach the beauties of pacifism."

During one of the "Crossfire" shows, I suggested that oversimplifications might be at work here. For amends, I invited Pat to take one of my courses on nonviolence. I envisioned him as a star student, diving into the writings of Gandhi, Dorothy Day, Jeannette Rankin and Dan Berrigan that he missed the first time around.

Pat has yet to show up, but a front row seat awaits. Perhaps next to a gay immigrant secular humanist.

Column | Pat Buchanan: a smile and an uppercut that stings

'At long last, have you left no sense of decency?'