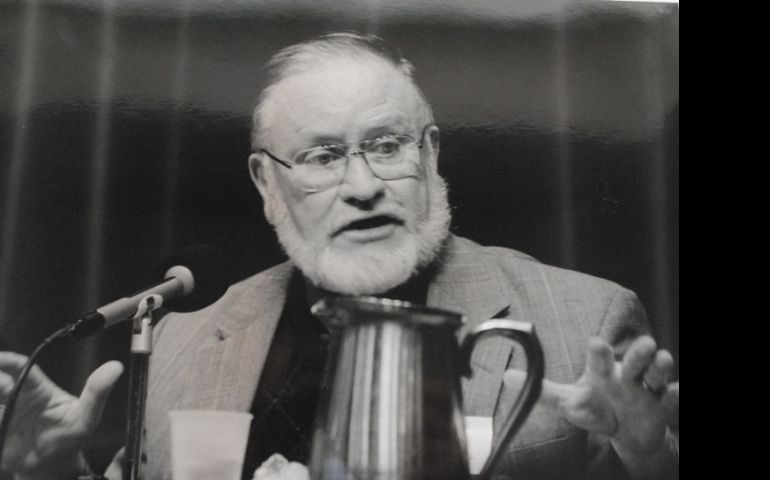 John J. McNeill pictured in this Dec. 6, 1997 photo at a forum at Georgetown University about homosexuality and Catholicism. (NCR file photo)

The patron to gay and lesbian Catholics who struggle to find a welcoming home in their church, John J. McNeill, died Sept. 22 in a hospice facility in Fort Lauderdale, Fla. He was 90.

McNeill is widely revered among gay, lesbian, bisexual and transgender rights Catholics as well as others who looked to his scholarly writings to help them accept their own sexuality and defend themselves against what they view to be misguided church teachings.

Francis DeBernardo, executive director of New Ways Ministry, today said McNeill possessed "a rare mixture of both a great heart and a great mind," adding that gays and lesbians have been "informed not only by his philosophical principles and logic, but by his awareness of deep and real human needs."

"It is not an overstatement to say that any of the pastoral, political, theological, and practical advances that LGBT Catholics have made in recent years could only have been brought about because of John's ground-breaking work."

Sister of Loretto Jeannine Gramick, co-founder of New Ways Ministry, called McNeill "a true pioneer in whose footsteps so many of us followed."

"I learned so much from his research and writing, but I learned even more from personal interactions with him by witnessing the passion and human concern he had for every LGBT person he encountered."

Born and raised in Buffalo, N.Y., McNeill entered the U.S. Army in 1942 and became a prisoner of war in Nazi Germany — an experience that for him was profoundly spiritual and led him to his entering the Jesuits in 1948. Ordained in 1959, he taught philosophy and theology at Fordham University, Union Theological Seminary, and Le Moyne College, where he was a noted peace advocate during the Vietnam War.

McNeill became a practicing psychotherapist, writing once that he wanted to spread the good news among lesbian and gay Catholics.

In 1976, after a three-year delay, he published with Vatican consent his seminal work, The Church and the Homosexual (now in its fourth edition). The book was the first attempt by a reputed scholar and theologian to examine and challenge traditional church teachings on sexuality and attitudes toward gay and lesbian Catholics.

Two years after publication, the Vatican rescinded its approval. A year later, he was ordered by the new head of the Congregation for the Doctrine of the Faith, Cardinal Joseph Ratzinger, and later Pope Benedict XVI, to enter a public silence. It was a silence he observed for nine years while continuing his private ministry to gays and lesbian Catholics. His work included psychotherapy, workshops, lectures and retreats.

"I had agreed to observe this silence in the hopes that over time the church would consider the evidence and begin a reevaluation, he wrote in the introduction in the fourth edition of his book.

In 1988, he received yet another order from Rome directing him to give up all ministry to gay persons, an order, he said, he could not follow in good conscience.

He disobeyed the order and this led to his expulsion from the Jesuit order, his home for nearly 40 years.

He continued to speak out against official Catholic teachings on matters or sexuality and in particular the harsh and "homophobic" teachings coming out of the Vatican. It was in 1986 in that Ratzinger issued a document in which he called homosexuality "an objective disorder" and spoke of its "orientation to evil." The document was issued on Oct. 31, 1986, and McNeill, among other church critics, referred to the Ratzinger letter as "the Halloween letter."

In 2012, McNeill was the subject of "Taking a Chance on God," a documentary film produced and directed by Dignity member Brendan Fay that highlights McNeill's role as priest, gay man, activist, and scholar.

He did not mince words when speaking of the pain he had felt at the hands of his church. In 2012, McNeill wrote that in his outspoken career he had tried "with the help of the Holy Spirit to free gay Christians from the lies of a pathologically homophobic religion."

His radical and provocative views on sexuality were never successfully muzzled by church authorities, though his presence at gay and lesbian Catholic meetings grew fewer and fewer as his health diminished in recent years. He published at several major best-selling books on sexuality and he kept a website for many years.

His pastoral approach toward healing the pain gay and lesbian Catholics were experiencing seemed boundless. Several years ago he wrote "We know from Revelation that God created us sexual beings and delights in our sexual play. Every human being has a God-given right to sexual fulfillment. … As a psychotherapist with several decades of experience that many, if not most, human beings grow up with badly damaged psyches and a wounded self-image that render them incapable, except with extreme difficulty, to enter into a committed relation based on mutual love. However, these psychically wounded humans still have a right to sexual fulfillment to the best of their ability."

He believed that individual conscience needs to be the final arbiter when deciding on sexual matters. He once wrote: "one of the most central teachings of Jesus, without doubt of utmost importance to all Christians and especially to lesbian, gay, bisexual and transgendered Christians is freedom of conscience."

He was animated by a deep spirituality. He once wrote that his writings had been based on "Jesus' promise to his followers to send them the Holy Spirit who will dwell in their hearts and lead them into all truth."

[Tom Fox is NCR publisher and can be reached at tfox@ncronline.org.]