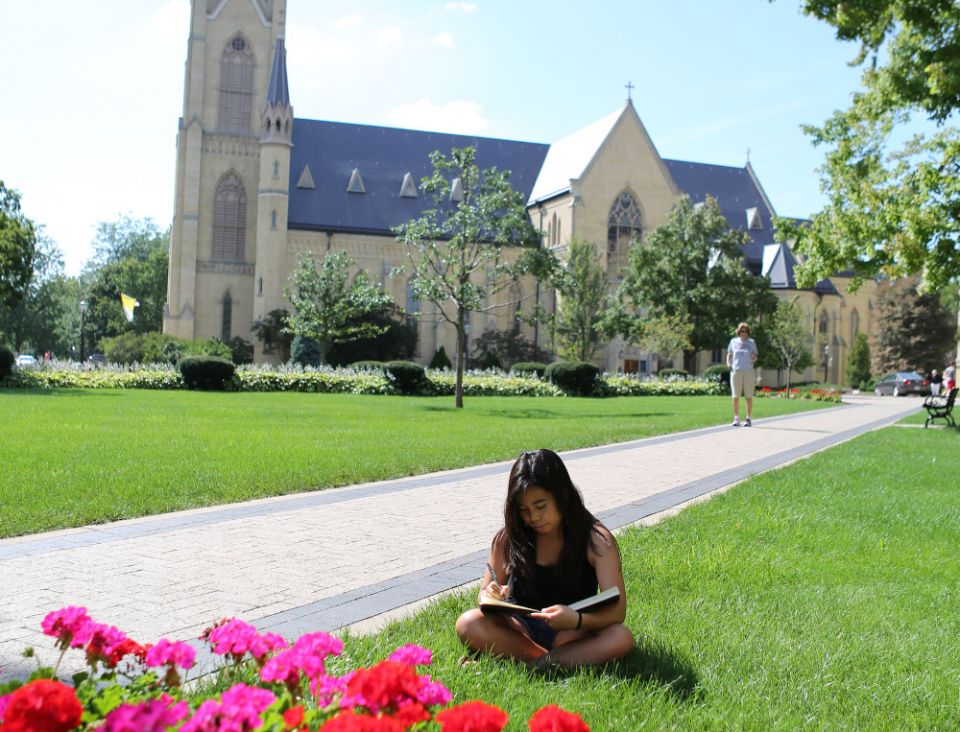 Megumi Inoue, a sophomore at the University of Notre Dame in Indiana, works in her art book during the first day of move-in for students Aug. 15. (CNS/Bob Roller)

In October 2015, reports of the death of the Federal Perkins Loan Program, the nation’s oldest, proved greatly exaggerated when the program was extended. Now the program, founded in 1958, is again slated to expire, this time on Sept. 30.

Reporting in 2015, The Chronicle of Higher Education’s Kelly Field noted that the program “spanned 11 administrations and provided $36 billion in aid to 30 million low-income students during its lifetime.” Or as the Education Department puts it, students with “exceptional financial need.”

Those undergraduate, graduate and professional students can borrow at a 5 percent interest rate, which they begin repaying following a post-graduation grace period. Undergraduates may receive up to $5,500 per year, for a maximum of $27,500, while graduate and professional students may be eligible for up to $8,000 per year, a total of more than $32,000.

With the program again slated to end, students across the country, including many at Catholic colleges and universities, will be affected.

Students at Catholic institutions would be devastated by a failure to reauthorize the program, according to Michael Galligan-Stierle, president of the Association of Catholic Colleges and Universities.

“According to the most readily-available data from 2013-14, 65,000 students enrolled in Catholic institutions of higher education received $130 million in Perkins loan disbursements,” he said. “To lose this valuable funding stream would negatively impact college access and affordability for hundreds of thousands of college students.”

Despite a slight drop in the percentages of students at Catholic colleges and universities receiving federal student loans, it’s still likelier than not that those students receive federal loans, according to Diane Walsh, research associate with the Association of Catholic Colleges and Universities. She cited the federal Integrated Postsecondary Education Data System.

In 2014-15, 58.5 percent of students at Catholic colleges and universities — not including seminaries or institutions that don’t receive federal aid — received federal student loans, including Perkins loans. That’s a slight drop from 60.2 percent, which received federal student loans in 2013-14, or the percentages between 2009-10 and 2012-13, which ranged from 61.2 to 62.1 percent.

On average, Catholic colleges and universities depend greatly upon tuition for their operating revenue, according to Luis Ricardo Fraga, professor of transformative Latino leadership and political science at University of Notre Dame. “Any reduction in the availability of loans to students sponsored by the federal government can have a significant impact on the capacity of these institutions to meet budgetary needs,” he said.

Perkins loans, when combined with Pell grants, can be extremely important factors in determining students’ stability and confidence, according to Fraga.

“Many Catholic colleges and universities serve as important gateways of initial access for such first-generation students,” he said. “The capacity of Catholic postsecondary education institutions, who serve that constituency, becomes more vulnerable.”

But others, such as Neal McCluskey, director of the Cato Institute’s Center for Educational Freedom, see Perkins loans differently.

“Both logic and empirical evidence suggest that student aid programs, such as Perkins, are largely self-defeating, fueling tuition inflation, or decreases in institutional aid to students, or other unintended consequences that on net don’t make college more affordable,” he said. “Indeed, they may make them less so.”

McCluskey suspects that Congress will extend the program in some fashion before the end of September, and even if the program does expire, it will almost certainly be revived.

“Politicians hate to be seen as taking something away from people, even if it is small and its effects negative,” he said.

The impact if the Perkins program expires would be “microscopic” compared to other aid sources, he said. “Private and older schools, which tend to have more Perkins funding, might feel a bit more of a pinch than other institutions, but again, the program is relatively tiny,” McCluskey said.

But many Catholic colleges and universities, with the exception of the University of Notre Dame and several others that can be need-blind, don’t have sufficient funds on their own to meet student financial need, according to Fraga.

Come end of September, Fraga hopes that Congress and the administration will become an advocate for students.

“My hope is that will happen,” he said. “There’s reason to continue to be worried that it will not.”

Students relying on Perkins loans will have to borrow from other sources, which may carry higher interest rates, “adding to the significant debt load that has become a major concern for many of us in postsecondary education for our current college students,” Fraga said.

The end of the loan program could also make it more difficult for Catholic colleges and universities to continue to serve their missions, having been founded as access points for working-class, immigrant-origin Catholic communities.

“That history is one that many Catholic institutions continue to be committed to,” Fraga said. “This possibility of elimination of the Perkins loan program makes their complying with their original mission all the more challenging.”

Jennifer Maertz, a New York attorney, knows firsthand what a Perkins loan can mean. After completing the first semester of studies in an associate’s degree at Suffolk County Community College in New York in 1993, Maertz found herself ineligible for a federally subsidized student loan following an increase in family income, which was too slight to make much of a dent in tuition costs.

“I never imagined that I would not be able to go to college until that moment. However, as luck would have it, President [Bill] Clinton made it possible to get student loans without a need basis that very same month I discovered that I no longer qualified,” she said. “That was the first time I realized what a direct impact an election and a president can have on my life.”

After finishing Suffolk and earning a Bachelor of Science degree from St. John’s University, Maertz, who is Catholic, studied at Touro Law Center. In her fourth year as a part-time law student at Touro, she learned that her student loans weren’t sufficient to cover tuition.

“I was terrified that I would need to drop out of law school in my penultimate year, with all the student loans for all those years but no law degree,” she said.

Touro informed her about the Perkins program, which helped her finish her degree and receive admission to the New York Bar. If the program expires, students would lose career opportunities while struggling to pay back loan debt, which could lead to defaulting, according to Maertz.

“Students could be forced to pay back loans on an education they were not able to compete, due to a lack of funding that they could have received through a Perkins loan,” she said.

Save the Perkins loan program, again

Catholic graduates need to stand up, not 'grow up'