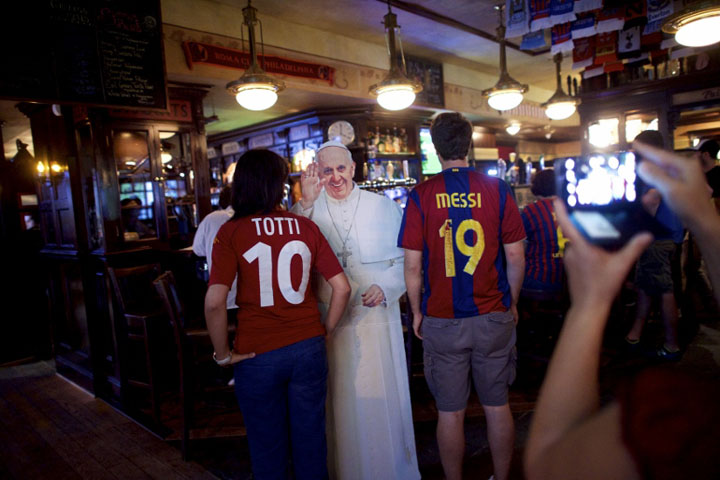 Soccer fans pose for a photo next to a cardboard cutout of Pope Francis at Fado Irish Pub & Restaurant in Philadelphia Sept. 16. (CNS photo/Mark Makela, Reuters)

Less than a day and a half before the expected Pope-pocalypse, the City of Brotherly Love seems almost preternaturally calm. While it can take approximately ten minutes to navigate the thronged corridors of the Philadelphia Convention Center where the World Meeting of Families is being held through tomorrow, the streets outside are emptier than usual -- bringing the green shirts of conference attendees and the higher than normal number of clerical collars on the streets into sharper relief.

Public and many private schools are closed. The courts aren't in session. Many businesses will be closed tomorrow. And according to the Philadelphia-based media outlet AL DÍA, some businesses that would like to serve the expected hordes of visitors have been told that they can't operate within the papal exclusion zone unless they are okayed by Aramark, the giant foodservice and facilities operation.

But it's pretty clear that the city is preparing for unprecedented activity. Tall metal barriers bedeck many streets, with others lying in piles on the sidewalk. Yellow plastic oblongs shield wires sprouting at strategic points along the papal motorcade route. A sign outside a restaurant just up from the Convention Center proclaims almost defiantly "We will be here" above an advertisement for a Philly cheesesteak. And outside the Convention Center, vendors hawk t-shirts with profiles of the pope's head and the words: "I was here."

At first, excitement about the pope's visit seemed an elusive commodity. Given that he's working 12-hour shifts the whole weekend, and doesn't get a day off until next Friday, a Philadelphia police officer didn't seem particularly thrilled. Another man, asked if he was hanging around to enjoy the excitement, said he was heading for the shore.

At 30th Street Station, hub for almost anyone coming into the city via Amtrak or SEPTA (the local carrier), two Amtrak policemen, standing out in the middle of the cavernous hall with a rather benevolent looking hound on a leash, were asked if the passenger railroad had started to ramp up security for the weekend -- and responded that they couldn't talk to the media. "We've gotten into trouble for that before," said one of the officers. Various inquiries produced a dearth of locals planning to attend the Saturday and Sunday festivities.

Fortunately, just at the right time, Srs. Elaine Brookes and Judith Parsons appeared. Laden with luggage, and bearing the signature clear backpacks with the World Meeting of Families insignia stamped on the back, they were returning to their Malvern, Pa., convent for a breather before returning to the city to participate in the weekend events.

Just being in his (the pope's) presence, and feeling everyone's enthusiasm (and not just that of Catholics) was going to be wonderful, said Brookes, an educational consultant for her order of Immaculate Heart of Mary sisters, still moved by the pontiff's speech to the U.S. Congress. Parsons, a philosophy professor at Immaculata University who is volunteering along with a cast of thousands of other locals on Saturday, praised the city, saying, "It's really shown the stuff of which it's made. People have embraced this visit, not just as Philadelphians, but as ambassadors for the world."

Parsons, who has a sibling who sits on a diocesan board, will be attending the papal Mass, while Brookes, who won a ticket through a community lottery, will be at the Basilica Mass on Saturday. And really, they couldn't be more excited.

[Elizabeth Eisenstadt Evans is a religion columnist for LNP Media Inc., as well as a regular contributor to Global Sisters Report.]