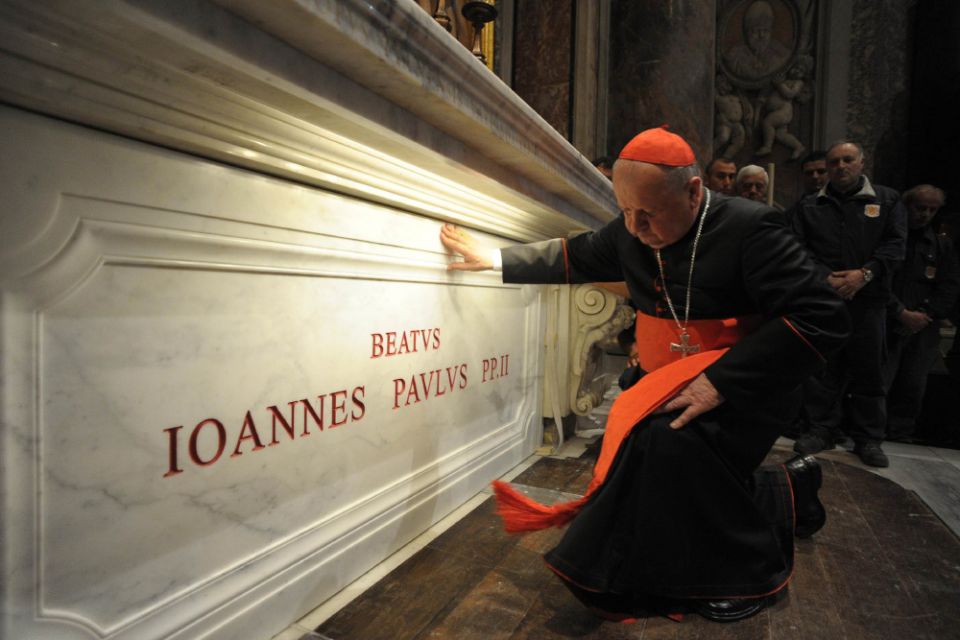 Polish Cardinal Stanislaw Dziwisz prays at the tomb of St. John Paul II in St. Peter's Basilica at the Vatican May 3, 2011. Dziwisz issued a statement March 20 vigorously defending the pontiff from "hurtful and historically untrue" claims that he was "slack" in combating sexual abuse by Catholic clergy. (CNS/L'Osservatore Romano/ Reuters)

Warsaw, Poland — A close aide to St. John Paul II has vigorously defended the late pope's handling of sexual abuse by Catholic clergy and denied accusations that he ignored the problem during his 27-year pontificate.

"Emerging opinions that John Paul II was sluggish in guiding the church's response to sexual abuse of minors by some clerics are prejudicial and contrary to historical facts – the pope was shocked and had no intention of tolerating the crime of pedophilia," said Cardinal Stanislaw Dziwisz, who was the pontiff's personal secretary for 39 years.

John Paul saw how local churches "dealt with emerging problems and gave help when necessary, often at his own initiative."

The 79-year-old cardinal, who retired in 2016 after 11 years as archbishop of Krakow, was reacting to media criticisms that the Polish pontiff failed to confront abuse claims when they became widespread in the 1980s.

In a March 20 statement to Poland's Catholic Information Agency, KAI, he said the pope had concluded "new tools were needed" when the abuse crisis "began to ferment" in the United States.

He added that the saint had given church leaders new powers to combat it, including indults, or special licenses to ensure "a policy of zero tolerance," for the U.S. and Irish churches in 1994 and 1996.

"These were, for the bishops, an unambiguous indication of the direction in which they should fight," Dziwisz said.

"When it became clear local episcopates and religious superiors were still unable to cope with the problem, and the crisis was spreading to other countries, he recognized it concerned not just the Anglo-Saxon world but had a global character," the cardinal said.

Criticisms of John Paul's record have increased in recent months.

The commentary added that the pope's "turning a blind eye to sexual abuse" had been shaped by communist-era experiences in Poland and had caused "the mess the church is in today."

However, in his statement, Dziwisz said St. John Paul had promulgated legal norms of "groundbreaking importance" for tackling abuse crimes in May 2001 – a year before "a wave of revelations" in the U.S. – requiring sexual abuse committed by clergy be referred to the Vatican's Apostolic Court.

He added that the pope had presented his own analysis of the crisis to U.S. cardinals in April 2002 following the publication of "Spotlight" claims and had also "known and approved" the launch of Vatican investigations in December 2004 against Fr. Marcial Maciel Degollado, the Mexican head of the Legionaries of Christ.

"To this day, this analysis serves as a reference point for all those committed to fighting against the crime of sexual abuse of minors by clerics," said Cardinal Dziwisz, who also defended John Paul's record in a Polish TV interview during a February Vatican summit on protection of minors.

"It helps diagnose the crisis and indicates the way out, and this has been confirmed by the Vatican summit convened by Pope Francis, who is following with determination the path of his predecessors in fighting against this problem."

Life without parole is not a solution to crime, pope says