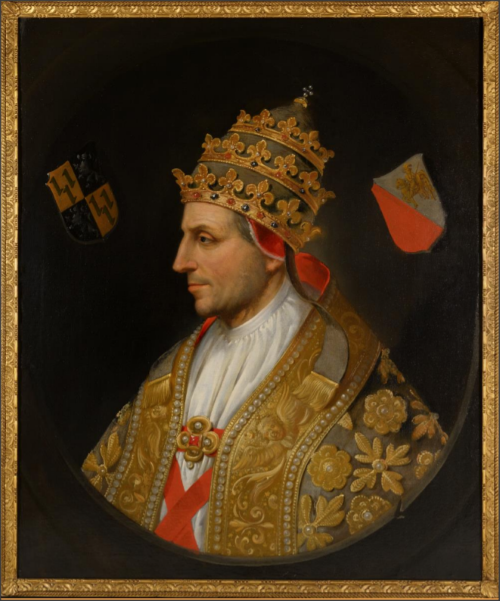 This image of Pope Adrian VI appeared on the cover of the Jan. 14 program for the panel discussion "The Pope of the Low Countries: Adrian VI," sponsored by the Embassy of the Netherlands to the Holy See hosted at the Collegio Teutonico inside the Vatican.

His election as pope came as a surprise to him, but once in office he was determined to rid the Roman curia of its institutional rot and put the Gospel back at the center of the Catholic Church. 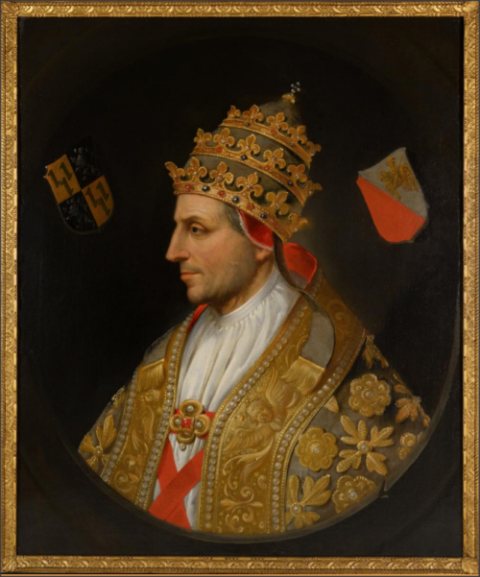 This image of Pope Adrian VI appeared on the cover of the Jan. 14 program for the panel discussion "The Pope of the Low Countries: Adrian VI," sponsored by the Embassy of the Netherlands to the Holy See hosted at the Collegio Teutonico inside the Vatican.

Cardinals used to living lavishly were rebuked and told to embrace humility and austerity. As for his theology, he was concerned with the question of offering the Eucharist for sinners and viewed poverty as a scandal.

While this might sound like a description of Pope Francis, it's actually of Pope Adrian VI, elected 500 years ago this month.

"What unites Pope Francis and Pope Adrian is their commitment to reforming the church," said church historian Paul van Geest, "precisely in times when it is a question of the credibility of the church in carrying out its message."

Van Geest's remarks came during a Jan. 14 panel discussion "The Pope of the Low Countries: Adrian VI," sponsored by the Embassy of the Netherlands to the Holy See hosted at the Collegio Teutonico inside the Vatican.

The Netherlands ambassador to the Holy See, Caroline Weijers, told NCR that both the "person and history" of Pope Adrian VI still holds resonance half a millennium later.

"He felt he was called to serve, not to dominate," said the ambassador, noting his life offers lessons for believers and nonbelievers alike.

Pope Adrian VI is the first and only Dutchman to be elected to the papacy, and he was the last non-Italian pope for 400 years. During the 1522 conclave that elected him, he wasn't even in Rome, but was serving as a cardinal in Spain.

It took the trained theologian and canon lawyer six months to make the journey from Spain to Rome, where he was finally crowned as pope on August 31, 1522. Despite the delay, the 63-year-old wasted no time in setting about with a determined agenda at a critical moment in the papacy, just five years after Martin Luther had posted his 95 theses and effectively launched the Reformation.

"He started the reform that is still ongoing," Fr. Markus Graulich told attendees during the panel. Graulich is the undersecretary of the Pontifical Council for Legislative Texts.

At his consistory speech to the cardinals who had elected him, Adrian VI "exhorted the cardinals to give a personal example by modesty of life," said Graulich, adding that Adrian VI was "convinced that one of the reasons for the crisis in the church was the fact that popes, bishops and priests had transgressed their obligations."

After witnessing "abuse of offices" in the church, Adrian was convinced that reform should be the "principal goal of his pontificate," Graulich said. 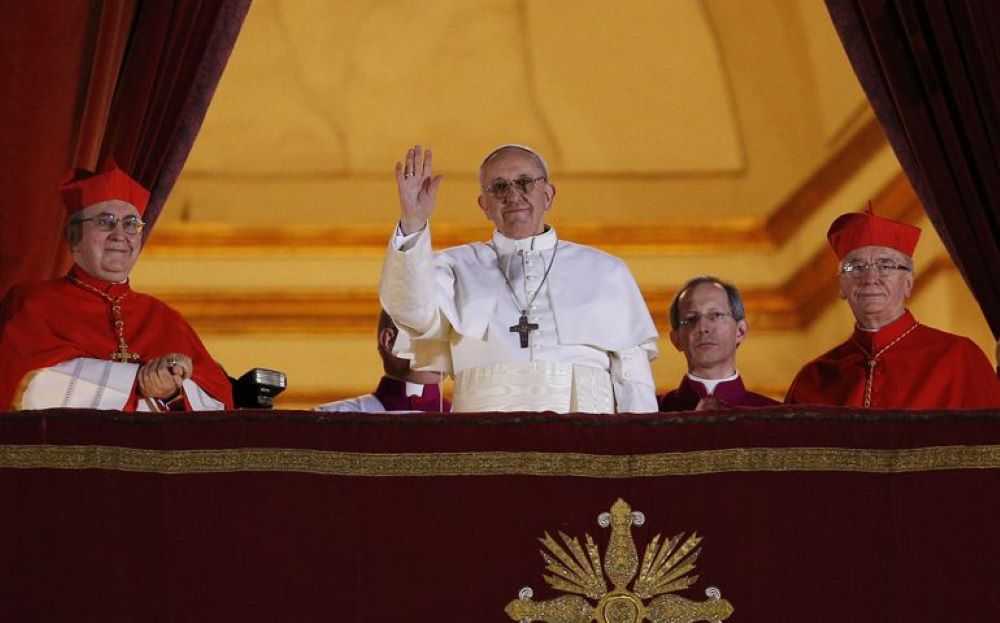 Pope Francis appears for the first time March 13, 2013, on the central balcony of St. Peter's Basilica at the Vatican. (CNS/Paul Haring)

Van Geest, a professor at both Erasmus University and Tilburg University in the Netherlands, offered the comparison to Pope Francis' Dec. 2014 Christmas greeting to the Roman curia — his first as pope — where Francis ticked off 15 spiritual "diseases" in their work and attitudes.

In his memorable remarks that year, Francis spoke of rampant gossip, careerism and a lack of joy among those who work for the church — not dissimilar to how Adrian VI spoke to the curia cardinals during his first address to them the day after he arrived in Rome to assume office.

"He rejected the gross secularity and worldliness that characterized so many contemporary churchmen," Graulich said, adding that Adrian's reform projects were geared towards "the conversion of the persons who hold an office in the church."

As for his personal style, Graulich noted that "pomp, magnificence and splendor made no appeal" to Pope Adrian.

A similar comparison: In 2013, when Pope Francis was elected, he shocked the world by appearing on the loggia of St. Peter's Basilica wearing a simple white cassock instead of the traditional red velvet mozzetta. Soon after, Francis announced he would not be residing in the Vatican's Apostolic Palace, but instead, in the more humble Casa Santa Marta.

Adrian's theological writings contain a number of themes that have also dominated the nearly nine years of Francis' papacy.

According to Geest, Adrian was concerned about the "possibility of allowing notorious sinners to participate in the Eucharist and their movement to the sacrament of penance."

By comparison, the early years of Pope Francis' papacy were defined by two synods on the family, which took up the question of Communion for divorced and remarried Catholics, resulting in Francis' 2016 apostolic exhortation Amoris laetitia.

In other writings, Adrian was consumed with the topic of poverty and expressed concern over the plight of refugees.

"If a rich person is in a position to improve the situation of a poor person but does not do so, [Adrian] calls this a sin," van Geest recalled. "It is an error not to be merciful to refugees and the needy because one then does an injustice to Christ, who is mercy and truth. In fact, someone who fails to be merciful will be condemned forever."

"Poverty and the failure to combat it are uncompromisingly described as scandals," van Geest added.

When Pope Francis was elected in March 2013, Brazilian Cardinal Claudio Hummes told Francis "don't forget the poor," which the pope later credited as his inspiration for choosing the 12th-century St. Francis of Assisi as his namesake.

Given these similarities, had Hummes been more familiar with the writings and legacy of Pope Adrian VI, van Geest believes he might have "advised Pope Francis to take the name Adrian after all."

"What unites Pope Francis and Pope Adrian is their commitment to reforming the church precisely in times when it is a question of the credibility of the church in carrying out its message.
—Paul van Geest, church historian