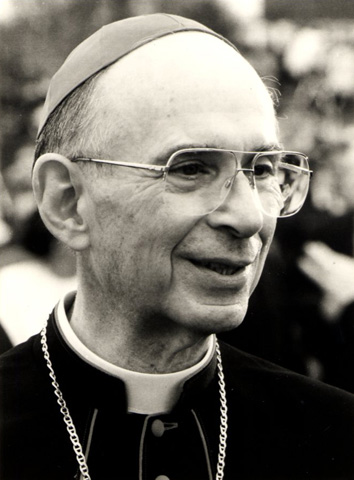 The election of Pope Francis in March heralded a season of surprises for the Catholic church, but perhaps none so unexpected -- and unsettling for conservatives -- as the re-emergence of the late Chicago Cardinal Joseph Bernardin as a model for the American Catholic future.

While there is no indication that Francis knows the writings of Bernardin, who died in 1996, many say the pope's remarks repeatedly evoke Bernardin's signature teachings on the "consistent ethic of life" -- the view that church doctrine champions the poor and vulnerable from womb to tomb -- and on finding "common ground" to heal divisions in the church.

Ironically, the re-emergence of Bernardin -- a man who was admired by a young Chicago organizer named Barack Obama -- is exposing the very rifts he sought to bridge, especially among conservatives who thought his broad view of Catholicism was buried with him in Mount Carmel Cemetery outside Chicago.

Francis, for example, repeatedly stresses economic justice and care for the poor as priorities for Catholics, and he warned that the church has become "obsessed" with a few issues, such as abortion, contraception and homosexuality, and needs a "new balance."

The new pope has also sought to steer the hierarchy away from conservative politics and toward a broad-based view of Catholicism "that is not just top-down but also horizontal" -- focused on dialogue in the church and with the wider world.

"The point that (Bernardin's) consistent ethic makes is exactly the same point that Pope Francis is making -- let's look at the whole picture and not just focus almost exclusively on three or so issues," said Archbishop Michael Sheehan of Santa Fe, N.M., who had been close friends with Bernardin since the 1970s.

"I certainly think that if Cardinal Bernardin were alive he would be very pleased with what Pope Francis is saying and doing," echoed Archbishop Joseph Fiorenza, retired archbishop of Galveston-Houston, whose 1998-2001 term as president of the U.S. Conference of Catholic Bishops was seen as one of the last in the mold of Bernardin.

"The consistent ethic of life theory that Bernardin proposed is getting a second look," Fiorenza said.

Several other bishops, church officials and observers agreed. But if those assessments are manna to Catholics hungry for a new direction in the church, they are anathema to conservatives who believe Bernardin epitomized everything that was wrong with the U.S. church before Popes John Paul II and Benedict XVI pushed the hierarchy to the right.

"The Bernardin Era is over and the Bernardin Machine is no more," the conservative writer George Weigel wrote in the journal First Things in a 2011 essay that trumpeted the end of a time "in which a liberal consensus dominated both the internal life of the Church and the Church's address to public policy."

The fact that Weigel and others would still be driving a stake through the heart of Bernardin's legacy -- as Peter Steinfels put it in a rejoinder in Commonweal magazine -- 15 years after his death is a testimony to the stature Bernardin once had, and the angst he can still inspire.

In fact, a generation ago, Bernardin was viewed as the quintessential American churchman -- a longtime president of the U.S. Conference of Catholic Bishops and then its resident wise man, coaxing the hierarchy into approving landmark documents on war and poverty that shaped the public debate on faith in America.

Yet the "John Paul II bishops" who came to power in the 1980s and beyond saw Bernardin's style and views as too accommodating and too reluctant to mount the barricades on behalf of a more assertive Catholic identity marked by a few hallmark issues rather than a spectrum of teachings.

In the end, the cardinal who championed consultation and reconciliation was unceremoniously pushed aside by many of his own colleagues. In 1996, as he approached the end of a poignant battle with pancreatic cancer, Bernardin launched the Common Ground Initiative as a final effort to try to end the growing polarization in the church.

But in rare public rebukes against one of their own, churchmen such as Cardinal Bernard Law, then of Boston, questioned Bernardin's project in ways that are strikingly similar to the criticism Francis has faced from conservatives.

Now, however, Francis is pope, and that gives Bernardin's acolytes some measure of hope. But the real question is whether the U.S. hierarchy is too far removed from the Bernardin era for it to make a difference.

In 2010, Bishop Gerald Kicanas of Tucson, Ariz., a Chicago priest who served under Bernardin, was in line to be elected president of the USCCB when conservatives engineered the election of New York Cardinal Timothy Dolan instead, a maneuver seen as the definitive end of Bernardin's influence.

"While there are still those in the conference who might like to return to the Old Ways (of Bernardin), the pope isn't interested in that and neither, in my judgment, are a critical mass of the bishops," Weigel wrote in an email.

While Weigel sees few similarities between Francis and Bernardin, many others see a broad overlap, and they say Francis is leading by example, whether the American churchmen see Bernardin's shadow or not. They also say Bernardin's approach is needed more than ever as the hierarchy has strained to speak with one voice on crucial issues.

"I think the conference has missed the skills of Cardinal Bernardin," Sheehan said.

The same could be said for Catholics in general, said Bishop Michael Warfel of Great Falls-Billings, Mont., current chair of the Catholic Common Ground Initiative, which has struggled to remain viable in the years since Bernardin died.

"I find it ironic that it's almost easier for Christians to talk to Jews or Muslims than it is for some Catholics to talk to each other," Warfel said. He added that, like Bernardin, Francis "is really providing a witness to a way of leading. ... He doesn't just want to have window-dressing dialogue."

Fr. Thomas Nairn, a leading Catholic ethicist who has edited two books on Bernardin's consistent ethic of life, also notes that despite attacks on Bernardin himself, the principles he preached remain embedded in Catholic discourse.

Papal encyclicals and documents from the U.S. bishops, such as their election-year guide for Catholic voters, reflect Bernardin's "seamless garment" ethic that decries the death penalty as well as abortion and poverty. Bernardin's ideas are central to the DNA of the Catholic health care system, and ethicists and moral theologians invoke his ideas, even if the younger generation prefers to associate them with John Paul or Benedict.

A version of this story appeared in the Nov 8-21, 2013 print issue under the headline: Francis breathes new life into Bernardin's contested legacy.