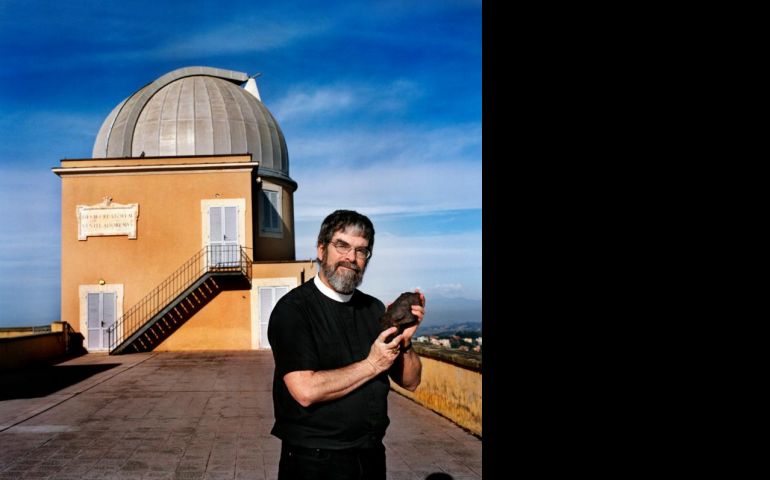 U.S. Jesuit Br. Guy Consolmagno was appointed director of the Vatican Observatory by Pope Francis. Consolmagno is pictured at the observatory in Rome in 2007. (CNS photo/Annette Schreyer)

He replaces Argentine Jesuit Fr. Jose Funes, 52, who has been on the staff of the observatory since 2000 and had been its director since 2006. The Vatican made the announcement Friday.

Consolmagno is a planetary scientist who has studied meteorites and asteroids as an astronomer with the Vatican Observatory since 1993.

He had been serving as president of the Vatican Observatory Foundation, coordinator of public relations and curator of the Vatican meteorite collection in Castel Gandolfo, one of the largest in the world.

A graduate of the Massachusetts Institute of Technology, Consolmagno was a post-doctorate lecturer at Harvard College Observatory and at M.I.T. before serving in the U.S. Peace Corps in Kenya where he taught physics and astronomy. He entered the Jesuit order in 1989 when he was in his late 30s.

His research focuses on meteorites, asteroids and the origin and evolution of small bodies in the solar system.

He was honored for his work by the International Astronomical Union in 2000 with the naming of an asteroid after him, the "4597 Consolmagno," a small, 12-mile-wide rock orbiting near the sun.

Author of numerous books on science and faith, he received the prestigious Carl Sagan Medal in 2014 for his ability to communicate accurately and clearly the discoveries of planetary science to the general public.

The same day the Vatican announced Consolmagno's appointment, Francis met with the observatory staff and guests taking part in a special symposium sponsored by the papal astronomers.

"The church urgently needs religious who dedicate their lives to being on the very frontiers between faith and human knowledge, faith and modern science," the pope told the group.

He also recognized the importance of communicating with the rest of the world how the church and its priests "embrace, encourage and promote authentic science," adding that it was "very important" his papal astronomers keep sharing their scientific knowledge with others, "freely giving that which you freely have received."

Francis encouraged continued and deeper dialogue between science and religion, underlining the special role scientific research can have in promoting interreligious dialogue, "which is more urgent than ever today."

The Sept. 14-18 symposium, held at the Vatican Observatory's headquarters at the papal villa in Castel Gandolfo, celebrated the 80th anniversary of Pope Pius XI establishing their headquarters there.

The observatory traces its origins back to the observational tower erected inside the Vatican by Pope Gregory XIII in 1578 in preparation for reforming the Western calendar.

Pope Leo XIII formally established the Vatican Observatory inside the walls of Vatican City State in 1891 as a visible sign of the church's centuries-old support for science. It was then moved from the Tower of the Winds to the papal summer residence in Castel Gandolfo in 1935 to escape the nighttime light pollution coming from Rome's streets.

The Vatican Observatory then set up a second research center in Tucson in 1981 after the skies above its telescopes in Italy got too bright for nighttime observation.

Pope Benedict XVI officially inaugurated a more modern headquarters for the Vatican Observatory in the gardens of the papal villa of Castel Gandolfo in 2009.