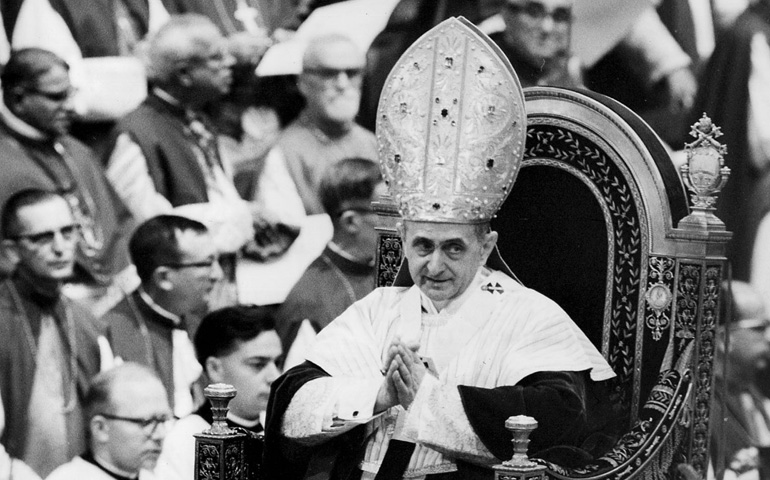 Pope Paul VI makes his way past bishops during a session of the Second Vatican Council in 1964. (CNS file photo)

As he wraps up a Vatican meeting marked by sharp debates over sex and morality, Pope Francis on Sunday will honor one of his most controversial predecessors by beatifying Pope Paul VI, who is most famous for reaffirming the Catholic church's ban on artificial contraception.

Beatification puts Paul one step shy of formal sainthood. The move might seem out of step with Francis' pastoral approach given that Paul's birth control ruling, in the 1968 encyclical Humanae Vitae, set the stage for the culture wars that overtook Catholicism after Paul died in 1978.

A wide swath of Catholics, especially in the U.S. and Europe, were furious over Paul's decision. They were convinced that the ban would be lifted and that Paul was shutting down the reforms that had begun a few years earlier with momentous changes adopted by the Second Vatican Council.

Many conservatives, on the other hand, hailed Humanae Vitae for reasserting traditional doctrine, and the division foreshadowed the deep splits that have played out even in this month's high-level synod in Rome -- a polarization that Francis says he wants to overcome.

Yet Francis is trying to accomplish that goal by focusing not so much on Humanae Vitae but on Paul VI's many other groundbreaking, though often overlooked, contributions:

Chief among them was Paul's call for a more missionary church that would be open to the world and one that would dialogue with other Christians and other believers, and with nonbelievers, too. "For us, Paul VI was the great light," Francis said in an interview in June, referring to his years as a young priest.

In addition, like Francis, Paul was a vocal champion of the church's social justice teachings, and he sought to embed those concepts as foundation stones of Catholic doctrine. He also implemented a system of regular meetings of bishops, called synods, to promote a more collaborative, horizontal church. That's a legacy Francis built on this month when he convened a free-wheeling synod of bishops deliberately modeled on Paul's vision.

"This synod, as it is unfolding, is what Paul VI had in mind -- a real debate among bishops," said Massimo Faggioli, an Italian-born theologian and church historian at the University of St. Thomas in St. Paul, Minn.

For Francis, the key to Paul's pontificate was his 1975 exhortation on evangelization, Evangelii Nuntiandi ("On Proclaiming the Gospel"), which Francis has called "the greatest pastoral document written to date."

In that landmark document -- largely overshadowed by the contraception encyclical -- Paul said that the church itself "has a constant need of being evangelized," and he wrote that people today listen "more willingly to witnesses than to teachers," so Catholic leaders above all must practice what they preach.

"The world calls for, and expects from us, simplicity of life, the spirit of prayer, charity towards all, especially towards the lowly and the poor, obedience and humility, detachment and self-sacrifice. Without this mark of holiness, our word will have difficulty in touching the heart of modern man. It risks being vain and sterile," Paul wrote in words that could have come from the pen of Francis.

In fact, in November 2013, Francis sent a personal representative to a meeting of the U.S. bishops and had him read those passages to the hierarchy, followed by clear instructions that Francis, like Paul, "wants 'pastoral' bishops, not bishops who profess or follow a particular ideology." Francis also asked all eight cardinals in his special advisory groups to reread Evangelii Nuntiandi.

Elected in 1963 on the death of St. John XXIII, amid intense debates among bishops at the Second Vatican Council, the former Cardinal Giovanni Montini inherited the difficult task of seeing the council through to its conclusion in 1965. In the following years, he pushed through the council's changes, including updating the liturgy from Latin to the vernacular and completing a major reorganization of the Roman Curia.

He also discarded the papal triple tiara and other trappings of the monarchical papacy, sending a message "that the pope was not a king, but a bishop, a pastor, a servant," as the website of the U.S. Conference of Catholic Bishops put it in one of its tributes.

And Paul -- not his globe-trotting successor, John Paul II -- was the original "pilgrim pope," the first pontiff to travel outside Italy in the modern era.

On his first trip, Paul met the Eastern Orthodox patriarch in Jerusalem in 1964, and during Paul's eight other foreign journeys he visited Asia -- a knife-wielding artist in the Philippines tried to stab him -- Africa and Latin America. In 1965, Paul became the first pope to visit the U.S., where he celebrated Mass at Yankee Stadium and delivered a ringing denunciation of war to the United Nations General Assembly.

His calls for economic justice were controversial but just as powerful. Because of that track record, Paul was a hero not only to Francis but to many other priests of the time who went on to become church leaders.

"Pope Paul helped me to understand that you don't need to be a brilliant theologian, a charismatic speaker or have the courage of a martyr to evangelize," said Bishop Howard Hubbard of Albany, N.Y., who until his recent retirement was the last bishop heading a U.S. diocese to be appointed by Paul.

But Paul is also returning as a hero for many in the newer generation. Cardinal Luis Antonio Tagle of the Philippines, a rising star in the global church, has praised Paul for his efforts to unify the church, citing Paul's motto: "No one defeated; everyone convinced."

Yet, as Tagle told Catholic News Service, because of that approach, Paul "would be attacked from all sides" and "would never become a star the way the other popes were."

Indeed, critiqued by the left over birth control and by the right for reforms to the liturgy, Paul in his last years was depicted as a Hamlet-like figure of equivocation. His end did seem tragic, as he aged rapidly under the burdens of the office, governing the church at a time of massive social upheavals abroad and close to home.

In the spring of 1978, a longtime friend of Paul's and a prominent Italian political leader, Aldo Moro, was kidnapped and executed by left-wing terrorists in Italy despite an impassioned appeal by the anguished pope. Paul died three months later, "one of the holiest and most loving of Popes" but also "one of the saddest," as the editors of the Catholic magazine Commonweal wrote at the time.

Will Francis wind up achieving what Paul could not by healing divisions and pushing the church forward? Or will he suffer a similar fate?

Despite the many affinities between the two popes, Faggioli said that "the difference between Paul and Francis is the kind of boldness, courage -- in a way, recklessness -- that Francis clearly has. He's taking huge risks, while Paul VI was always much more cautious."