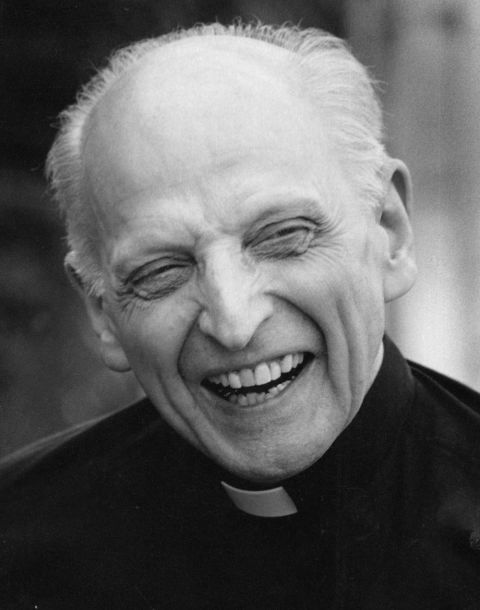 The general postulator of the Society of Jesus said he has begun compiling all of the writings of Jesuit Fr. Pedro Arrupe and seeking eyewitnesses who can attest to the holiness of order's late superior general. Arrupe is pictured in an undated photo. (CNS/Jesuit Fr. B. Reynolds)

Vatican City — The general postulator of the Society of Jesus said he has begun compiling all of the writings of Jesuit Fr. Pedro Arrupe and seeking eyewitnesses who can attest to the holiness of order's late superior general.

The massive task of compiling a list of 120 witnesses, especially those who personally knew Arrupe, should "be finished in about a year," Jesuit Fr. Pascual Cebollada, the postulator, told Catholic News Service July 13.

"I can tell you that these witnesses will be from various places: from Spain where he was born; Japan where he was first sent by his superiors; and from Rome where he lived the last years of his life," Cebollada said.

During a meeting in Bilbao, Spain, with Jesuits and lay associates July 11, Fr. Arturo Sosa Abascal, superior general of the Society of Jesus, announced that "we have seriously begun the process for the beatification of Father Pedro Arrupe."

"We are still at the beginning of the process, but Cardinal Angelo de Donatis, the vicar of Rome, has given the Diocese of Rome's approval to open the process of beatification," Sosa said.

Cebollada, who is responsible for overseeing the sainthood causes of Jesuits, told CNS that he has met with the judicial vicar of the Diocese of Rome to discuss the initial phase of gathering information regarding Arrupe's life and works.

He also is tasked with collecting all of Arrupe's writings, which will be studied by theological censors who will "testify whether or not there is anything against the faith or tradition of the church.

"This is the type of work that we have begun to do," Cebollada said. "We are in the preparation phase that is done in every cause."

Once the postulator has the list of potential witnesses and has collected the writings, the formal opening of Arrupe's sainthood cause would be opened by the Diocese of Rome, which is the diocese where the former superior general died.

Born in Spain, Arrupe entered the Society of Jesus in 1927. Following the expulsion of the Jesuits from Spain in 1932, he continued his studies in Belgium, Holland and the United States. After ordination, he was sent to Japan in 1938.

According to the U.S. website of the Jesuits, Arrupe was serving in a Japanese mission outside of Hiroshima when the United States dropped the atomic bomb there in 1945. The Jesuit priest, who studied medicine before entering the society, and several companions "were able to give aid to 150 victims."

"Arrupe is the best of the Jesuits, although this may sound exaggerated and emotional," Cebollada said. "But for many of us, from different generations, Father Arrupe is an example of being rooted in Christ, a man of the church, a man who follows the calling of the Holy Spirit and, without fear, made the decisions he needed to make because he was rooted in God."

For this reason, he added, the announcement of the first steps of Arrupe's sainthood cause made headlines even though the formal opening of the cause "will take almost a year to complete."

In 1965, Arrupe was elected superior general of the Society of Jesus. He resigned in 1983.

Cebollada told CNS that Pope Francis and countless other Jesuits who lived during and after Arrupe's death in 1991 continue to be inspired by his life and spirituality.

The general postulator recalled Pope Francis' meeting with a group of Jesuits during his visit to Peru in January, in which the pope recalled "the grace of the generalate of Father Pedro Arrupe."

Pope Francis "gave several examples of Father Arrupe as a person who helped us Jesuits rediscover our spirituality in the 1970s," Cebollada said.

Despite the pope's admiration for the late superior general, Cebollada told CNS that Pope Francis will play no role in preparing Arrupe's cause.

"The pope is the last person in this long process of discernment in a beatification or canonization cause. He is the last judge, and, in the end, it is he who approves the decree. So, he cannot be in the middle of this; he, or his successor, is the one at the end (of the process) who would eventually sign the decree," Cebollada said.

Saintly caution: Church's reputation on the line when judging sanctity

Pope declares by decree three new saints for the Americas