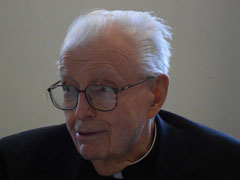 WORCESTER, MASS. -- Jesuit Fr. John E. Brooks paused, his fork temporarily suspended above his apple crumble. The 88-year-old Holy Cross president emeritus, his West Roxbury accent clear and direct, told NCR during lunch in the Hogan Campus Center, “Clarence Thomas called this morning -- it was more of a joke really.” The U.S. Supreme Court justice, a former Holy Cross student of Brooks’, “wanted to know did I really have a tear in my eye.” Thomas was referring to the concluding line in an excerpt from Diane Brady’s book Fraternity, reprinted in the fall 2011 Holy Cross Magazine, that ran, “One of the students saw Fr. Brooks standing to the side, slipping out quietly with tears in his eyes.”

Joked Thomas, on the phone to Brooks, “You never shed a tear.”

Brooks hasn’t had much time for tears. Toughness was required when Dr. Martin Luther King Jr.’s assassination impelled then theology professor Brooks into an East Coast recruitment drive for African-American students. Regardless of how historically salutary his decision, in the short term it brought neither tranquility nor harmony to the college.

To accomplish even the first steps, Brooks needed the support of the somewhat besieged Holy Cross president, Jesuit Fr. Raymond J. Swords. Both men engaged in a great deal of persuasive argument to eventually quell consternation among the trustees, uproar from the alumni, divisions among the faculty, and doubt, dismay and/or anger among the white students. It certainly didn’t help with the endowment drive. Not least, there was the matter of $80,000 in scholarships Brooks had promised to those he recruited.

When Brooks was growing up in West Roxbury, he said, it was all white, “and it’s still all white now.” At Boston Latin, there were perhaps a handful of black students in a 2,400-student body. His first exposure to the College of the Holy Cross, was with his dad, a New England Telephone Company divisional manager, bringing him to the football games. “Those were the days,” he said, nostalgically about the Holy Cross team. Yet when he enrolled at Holy Cross in 1942, he had one black classmate. “I don’t know how he survived the four years, the isolation.”

With World War II under way, Brooks was soon in uniform and spent three years in Europe. “The Army was segregated then.” Postwar it was back to Holy Cross, one of 300 25- to 28-year-old GI college freshmen and sophomores. He studied geophysics with a view to oil exploration, graduated, then headed to Penn State for graduate studies. “I found I missed the Jesuits for some reason, but I didn’t feel that way when I was at Holy Cross.” He applied to enter the Society of Jesus, was told to go back and finish graduate school, but to his surprise was called to enter early in 1950. It was an era, he noted, when any black Jesuits were usually assigned to Jamaica.

By 1963, after graduate work in theology at the Gregorian in Rome, he was back at Holy Cross. What happened while in Rome, he said, was “one of the great gifts in life God has given to me -- the Second Vatican Council opened.”

Asked if it was tough to convince the black students to attend Holy Cross, even with the promise of scholarships, he replied, “Yes. First they saw it as a Catholic school. Then they saw it as an all-white school. What I probably emphasized was the importance of a quality education. They were students who took academic life seriously. One of the things that bothered me was their likely isolation.” Brooks felt the only answer was to give the black students their own residence. “We received a lot of criticism -- we couldn’t do anything to overcome the isolation issues without being criticized. Everyone’s goal was to make the students all the same. Well, you can’t just do that, it takes time.” It took more than that when, in 1969, to protest perceived college racism in a judicial review, 65 black students quit Holy Cross in protest.

That same year, Swords asked Brooks, now college dean, to cover alumni groups. “Because it was I and not he, they clobbered him in front of me: very blunt, hard, negative. I always defended him. I admired him. It was a good thing he didn’t hear it.” The next year, Brooks was named president.

He had a second goal: admitting women students. “The coeducation push probably generated more alumni negativity than anything. The black situation was more nasty, they said mean things, the words used. It was awful.”

Even so, Brooks prevailed. He prevailed again in his determination to keep Holy Cross as a top-flight liberal arts college.

There was one graduate program, in chemistry. As president, “I got rid of it. It was a struggle. Of the 28-29 Jesuit colleges, we’re the one that held the fort for undergraduate education. There’s always a fight. A fight with admissions to make sure you’re getting the quality of students you want. I wanted Holy Cross to be as good as, or better than Amherst or Williams.”

Brooks still teaches, and he’s still a tough taskmaster. He interviews each student he admits to his course in contemporary Christology. “I come down hard at the very beginning. I tell them I expect them to be there for every session. Expect them to do the readings. I base my acceptance on their willingness to read, their habit of reading. Each student marries a theologian -- Hans Küng, [Karl] Rahner, [Edward] Schillebeeckx, [Jon] Sobrino, [Dietrich] Bonhoeffer. At the end of semester they have a two-and-a-half hour oral exam. I bring in outside examiners. They’re petrified. At the end there’s a little reception, a dinner of students and examiners -- and they’re very happy, for they’ve proven to themselves they’ve learned something. I’m very committed to the liberal arts. I think we acquired a reputation for high ratings, we get them. You may disagree with them but you have to be in there.

“That’s why I was so happy with the first group [of African-American students he recruited]. They were so good academically and intellectually.”

The Fraternity five still keep in touch. As do so many of the others, black and white.

Quitting online church is abandoning the one for the 99

Irish bishops: Marriage between man, woman is matter of justice