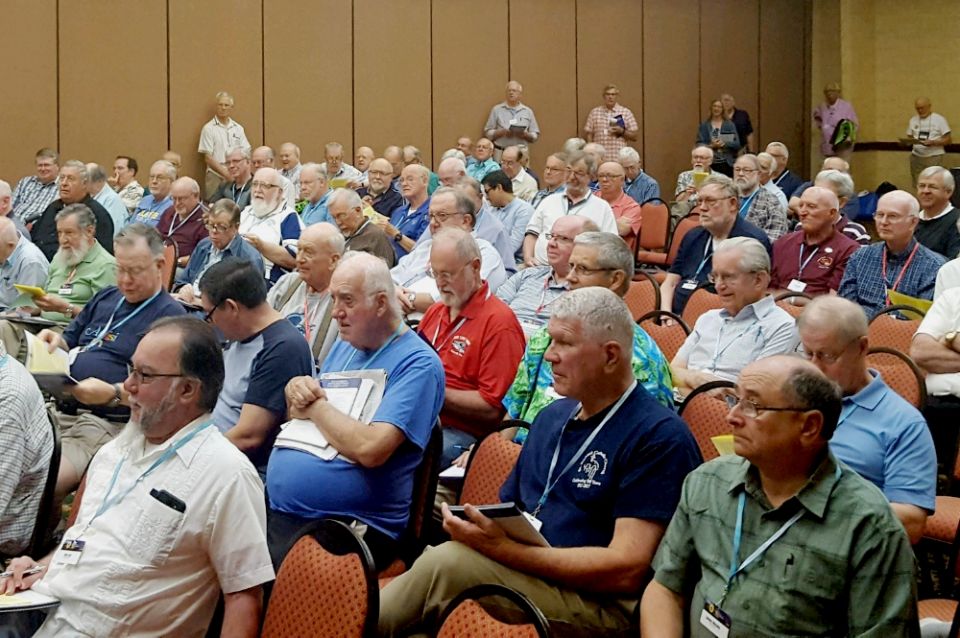 Priests gather for morning prayer June 28 during the assembly of the Association of U.S. Catholic Priests in Albuquerque, New Mexico. (NCR photo/Dan Morris-Young)

Albuquerque, N.M. — More than 200 participants at the annual assembly of the Association of U.S. Catholic Priests (AUSCP) June 25-28 here heard calls for the church to focus on young Catholics, embrace the pastoral theology of Pope Francis, and affirm the Second Vatican Council's theological spadework.

During two business sessions, the attendees — the vast majority of whom are what researchers denote as "Vatican II priests" — also approved four goals and passed eight resolutions on topics such as women's status in the church, ordination of married men, climate change, seminary formation and clericalism.

One of the more eyebrow-raising resolutions, titled "Gospel Non-Violence and Gun Control," committed association members to "never to carry a gun or other lethal weapon" for self-defense nor the defense "of another who is in imminent danger of suffering assault by an armed assailant."

Rather, the resolution reads, the member would "willingly ... interpose one's own person to shield a potential victim."

According to the assembly program, sponsors were Fr. Dave Cooper of the Milwaukee Archdiocese and Fr. Harry Bury from the St. Paul-Minneapolis Archdiocese.

Fr. Bob Bonnot, chair of the association's leadership team, said he was edified by the "vast array" of social justice issues addressed by the members, calling it an "agenda for working into the future."

On the final day, June 28, attendees gathered in several open discussion sessions with specialists on issues including addiction and the opioid crisis, priestly formation, ministry to transgender persons, priestless parishes, younger and millennial Catholics, community organizing, and due process and justice for priests.

In multiple interviews with NCR, participants spoke highly of the four-day program, themed "The Church in a Post-Modern World: Spirituality and Ministry in a Secular Age."

First-time assembly participant Fr. Dana Michaels of the Diocese of Oakland, California, said he had been "skeptical" about attending, but "by the second day, I could see the value and ... it has been very, very enriching." 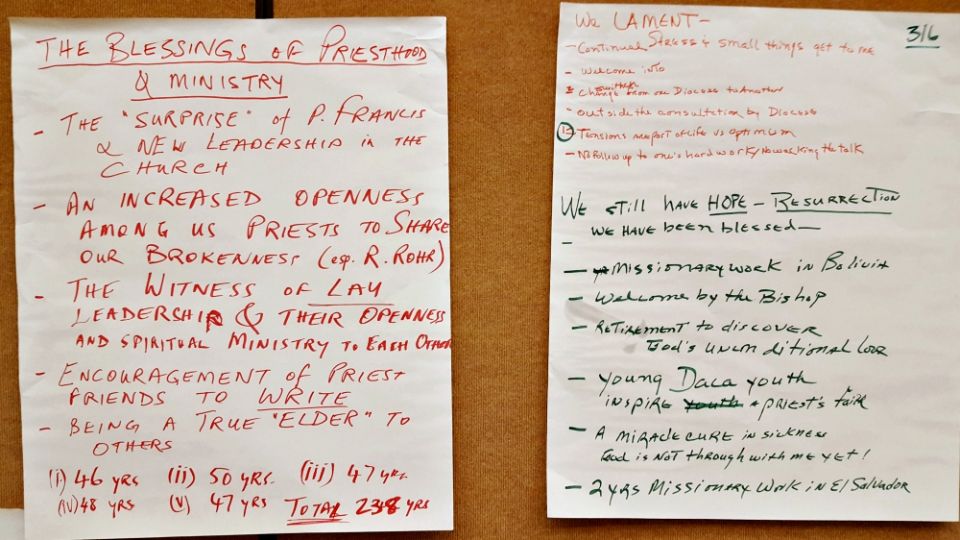 During a morning session June 26, Association of U.S. Catholic Priest participants broke into small groups to review life issues for which they were grateful or concerned. Thoughts and comments were recorded on large sheets of paper such as these and posted on a convention room wall. (NCR photo/Dan Morris-Young)

"One of the goals of the Association of U.S. Catholic Priests is mutual support of priests by one another, and that was going on through the whole week," said Bonnot, a priest of the Diocese of Youngstown, Ohio. "And in the process of that, we also strive to raise a priests' voice, a prophetic voice addressing issues of the day in the church and in society."

"I came rather grudgingly," she admitted, "and I am walking away utterly astonished at the bright light that has shown in this place for the last three or four days. Astonishing human beings who have done so much for the common good."

Franciscan Sr. Katarina Schuth spoke on the assembly's opening evening, sharing research on younger Catholics and calling on her decades of teaching and seminary work.

Effective evangelization of young Catholics, she said, is an uphill battle and must employ patience, sincere listening, genuine inclusion in decision-making, respect, dialogue, and knowledge of their values and culture.

On June 26, San Diego Bishop Robert McElroy's address focused on understanding the profundity and implications of the pope's strong emphasis on pastoral theology.

Core to Francis' pastoral theology, McElroy said, is that "the church's pastoral identity and action must be rooted in the life situations that men and women actually experience in the world today."

Franciscan Fr. Richard Rohr, a well-known author and lecturer on spirituality and contemplation, spoke to the assembly June 26 and led the group in a half-day retreat June 27. 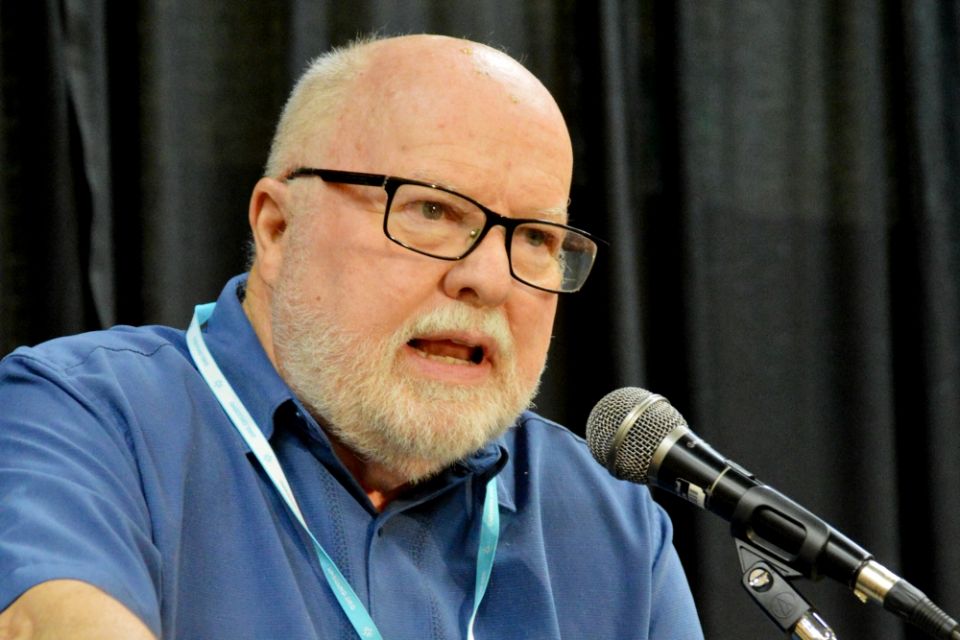 During his keynote, Rohr drew laughter several times, sharing anecdotes from his life and formation as a priest, which, he pointed out, probably had much in common with most of the audience of predominantly senior priests.

Founder of the Center for Action and Contemplation in Albuquerque, Rohr said he was deeply thankful to the Franciscan order for his broad education, having spent part of his studies in Rome during the Second Vatican Council.

He contrasted his training to more narrow formation programs that center on providing "conclusions," rather than "the process" of how to arrive at an informed result.

"I was very naive, a child of the '60s, the Vatican Council," Rohr told NCR. "I just assumed, with that wonderful theology, that all the priests after me would think like I did. Boy, was I wrong.

On June 27, the organization presented its St. John XXIII Award to Rohr as well as to Fr. Jay Davidson of Evansville, Indiana.

The 2018 assembly of the Association of U.S. Catholic Priests

In both his opening evening welcome and homily during the June 27 Mass, Archbishop John Wester of Santa Fe, New Mexico, lauded the group, calling it "a wonderfully powerful and necessary voice" and "voice of hope and joy."

The association "really has as a core part of their mission statement to really live out the Second Vatican Council," Wester, the association's episcopal moderator, told NCR. "And Pope Francis, I think, has given new life to the council by who he is and by the way he exercises his Petrine ministry."

The U.S. priests' association "is very encouraged by his papacy, and they certainly strongly support him and pray for him, and are hopeful that he will continue to lead in such a courageous fashion," Wester said.

Attendees ratified four organizational goals by at least a two-thirds majority on June 26:

The group also reaffirmed a 2017 goal on priestless parishes in which it suggested a larger role for lay ministers and better serving the faithful, association spokesman Paul Leingang said.

During a business session June 27, members passed eight resolutions, each again by at least a two-thirds majority.

"The purpose of a resolution is to give direction to the AUSCP leadership team, which, in turn, will develop a public statement and determine how and when the statement will be made public," Leingang said.

Founded in 2011 and based in Tiffin, Ohio, the Association of U.S. Catholic Priests has about 1,200 priest members in addition to about 120 enrolled supporters.

[Dan Morris-Young is NCR West Coast correspondent and writes for NCR's The Field Hospital series. His email is dmyoung@ncronline.org.]

A version of this story appeared in the July 13-26, 2018 print issue under the headline: Priests' social justice concerns shape assembly, resolutions .

Adopting political tactics at synod is understandable, but misplaced