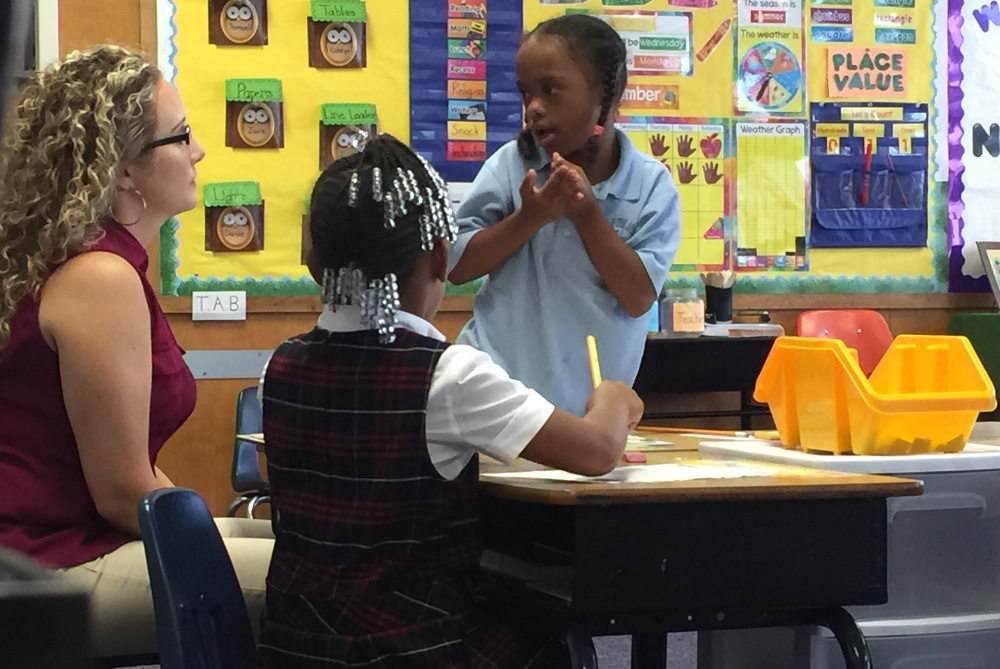 Students with special needs and their teacher at St. Philip the Apostle School in Camp Springs, Maryland

Catholic organizations around the country are stepping up to offer children with disabilities an opportunity for a Catholic school education.

The Catholic Coalition for Special Education, formed in the Washington, D.C., area in 2004, has had a significant impact on local educational institutions, helping them begin or maintain special education programs. Francesca Pellegrino started the organization while raising her own son with special needs.

"Naturally the church is one of the first places you think of for support," Pellegrino told NCR, "and as [my son] got a little bit older, I started thinking about preparation for the sacraments. I had early school experiences for him, and I wasn't quite finding what I was looking for."

Pellegrino quickly found that her experience was not unique after meeting other parents through the Special Olympics. "I discovered that many of them were looking for and not finding" programs similar to the ones she was seeking, she said.

"I really wanted someone who could help prepare [my son] for first holy Communion and it wasn't easy." She also found that the secular education offered in the public school "wasn't quite what I had envisioned for my son. So I started talking to other people and I found that there were many parents hoping to find a Catholic education for their child with a disability, but there were very few options available to them."

Pellegrino assembled many of the parents, along with educators and priests to discuss the issue. Out of their meetings, the Catholic Coalition for Special Education was born, to help schools "create new programs or expand the one or two programs that existed, but also provide training for teachers and administrators, and also to provide practical and spiritual support raising children with disabilities," Pellegrino said.

The coalition set out to provide grants through its "Believe in Me!" program to support schools in their education of children with disabilities. "We recognized that the schools really needed additional funding to be able to hire special education teachers, paraprofessionals, equipment, materials, whatever it was for their program to be successful," Pellegrino said. The grants have helped get several special education programs off the ground, and to sustain many others.

"We've seen that another huge need is teacher training, professional development, coaching," Pellegrino added. The coalition has responded with its Tuition Grants Program, which provides graduate education opportunities for those who seek to specialize in special education.

The coalition has now given away more than $1 million in grants, impacting 29 schools and tens of thousands of children and educators in the Baltimore and Washington archdioceses.

In the years since the coalition's founding, other organizations have also begun to spring up to give children with special needs a chance to receive a Catholic education. In the Archdiocese of Kansas City, Kansas, "Enriching Many by Reaching All in Catholic Education," known by its acronym, EMBRACE, became a full-fledged organization in 2016, after more than a decade of work went into getting it off the ground.

Maggie Mosher, EMBRACE's executive director, told NCR that the group formed as Catholic school parents discovered a shared desire "for all their kids to attend the same schools" regardless of whether they had a disability. "And as a [special education] teacher, I was seeing the need for even kids within the school who have disabilities to get better services, and get them within their building," Mosher added. "We all saw that there was a need for this in our schools, to help better embrace all kids."

As EMBRACE began to pick up steam, the founders reached out to other groups with similar missions, including the Catholic Coalition for Special Education and FIRE, a similar program in the Diocese of Kansas City-St. Joseph, Missouri.

EMBRACE followed the other groups in offering grants to support programs within schools, as well as professional development. The group also maintains a resource center in Overland Park, Kansas.

EMBRACE's grants are available to Catholic schools within the Kansas counties of Wyandotte and Johnson. Just two years in, the group has already given out $430,000 in three-year grants to 10 schools, which helped with a variety of the schools' needs.

The impact of these organizations is clearly felt within schools, says Katy Prebble, president of the Academy of the Holy Cross in Kensington, Maryland. The all-girls high school is in its fifth year of working with the Catholic Coalition for Special Education, after two girls with special needs enrolled. Today, 11 girls with special needs are enrolled in the academy's Moreau Options Program.

Prebble, who was in her first year as the president of the school when the program began, said that the "professional development" that the coalition helped provide in particular "was really important." Not only did it help with the financing of the new program, the organization also helped put the school in touch with college professors and researchers who helped get the Moreau Options Program off the ground.

The Moreau Options Program is a certificate, rather than diploma program, but Prebble says that they "want to prepare [students] for college if that is the next step." It has succeeded, as a few graduates in just the first four years have gone on to college or university. The academy also has started a program in special education for the classmates of Moreau Options Program students who want to study in the field, which is still very much in need of more educators. 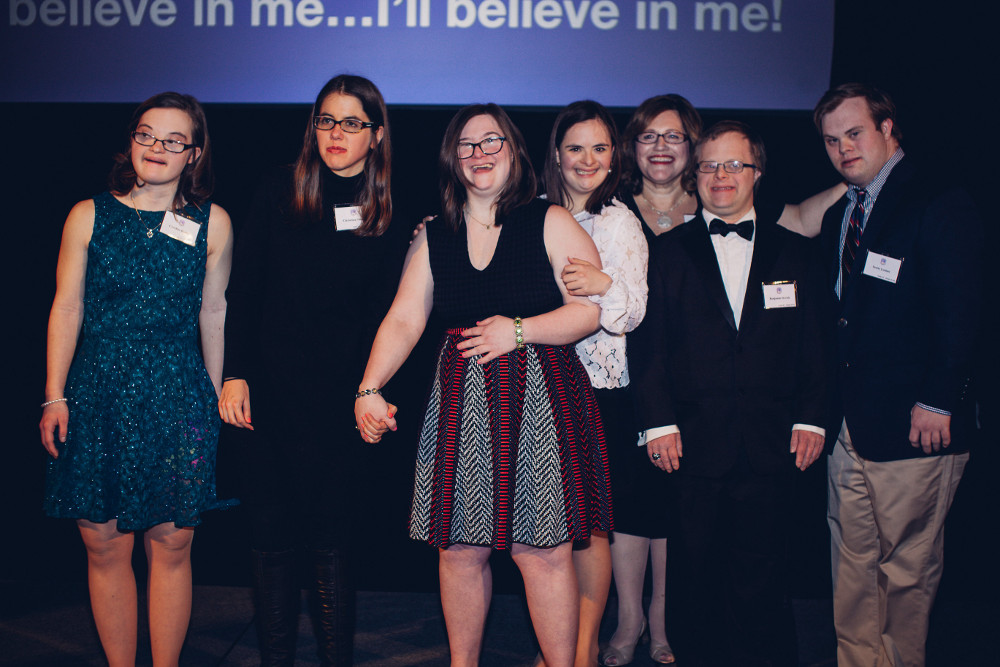 Six young adults who attended Catholic schools thanks to Catholic Coalition for Special Education attend the organization's spring benefit gala. All of them now have jobs or are attending college. They are standing with Francesca Pellegrino, third from right, of CCSE. (Courtesy of Nick Stone Photography)

While the road toward inclusive education for all Catholic school children who seek it may still seem long, groups like the Catholic Coalition for Special Education and EMBRACE are continuing to spread.

Tony Armitage, who lives in the St. Louis Archdiocese, told NCR that after his family was told his son was unable to continue his education at his parish school, he and his wife founded One Classroom, which has been growing over the last few years.

Following the work of other groups, especially nearby FIRE, Armitage managed to convince his pastor and school administrators that a similar effort was needed in their diocese.

Not only was Armitage's son eventually welcomed back into the school, seven children with disabilities now attend there, and the foundation has helped seven other schools integrate students with special needs into their classrooms as well.

"We're now just working to grow [One Classroom's] ability to meet the needs of families, as many families that want this for their kids [as possible], and help schools go from not knowing how to do it, to do it," Armitage said.

A version of this story appeared in the Feb 22-March 7, 2019 print issue under the headline: Programs give special needs kids a chance at Catholic education.