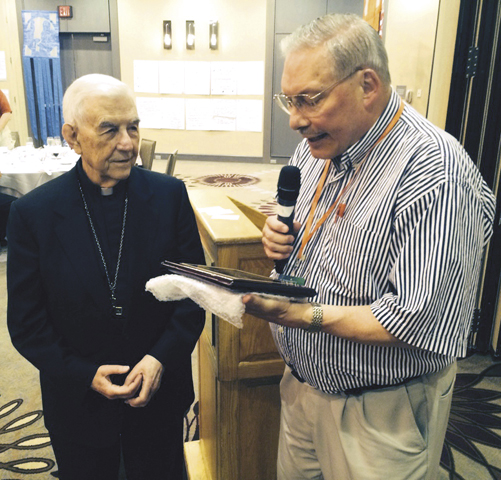 At a chance meeting outside a Rome coffee shop in April 2012, emeritus Archbishop John R. Quinn of San Francisco was introduced to then-Cardinal Jorge Mario Bergoglio. The man who in less than a year would be elected pope told Quinn that he had read the archbishop's book about papal reform and said he hoped it would be implemented.*

Quinn related the story June 25 to some 225 priests at a gathering of the Association of U.S. Catholic Priests in St. Louis, where the prelate was honored with the group's Pope John XXIII Award.

Then-Cardinal Jorge Bergoglio was referring to a 1999 Quinn treatise, The Reform of the Papacy: The Costly Call to Christian Unity. That book was Quinn's response to Pope John Paul II's 1995 encyclical Ut Unum Sint, a meditation on ecumenism and the role of the office of the pope as sign of church unity.

Quinn said he took up John Paul's offer, contained in the encyclical, to further discussion. Quinn examined papal structural history and the centralization of the office that has occurred over the centuries. He makes the point in his book that decentralization of Vatican authority is a prerequisite for any serious consideration of union between the Roman Catholic church and other Christian church bodies. The book called for a review of monarchal governing structures and a return to serious collegiality among bishops and local churches, including allowing them to select or elect their own bishops.

Quinn has argued that the idea of a decentralized church is hardly novel and is based on governing models in place 1,500 years ago. Re-establishing a more collegial, less centralized church governance, Quinn says, was the intention of the world's bishops who gathered during the Second Vatican Council (1962-65). The vision of a more collegial church, he states, is found in the Vatican II document Lumen Gentium, "The Dogmatic Constitution on the Church."

Francis has said he supports Vatican II and has indicated he wishes to shake up the Vatican old guard. His words have been widely interpreted as a preference for decentralizing the church.

Last year, Quinn wrote Ever Ancient, Ever New: Structures of Communion in the Church, an elaboration of his earlier work. In the new book, the prelate says decentralization could be achieved by returning the Roman Catholic church to a model of governance found in Eastern Orthodox churches. He suggests the establishment of patriarchates, while allowing synods of bishops to have real decision-making power.

In such a reconfiguration, the appointment of bishops, the creation of dioceses, questions of liturgy and other matters of Catholic practice would be up the regional bishops' conferences, Quinn writes. He adds that the bishop of Rome should remain the sign of unity and love among the churches, and that a de-centralizing papacy would enhance church unity and strength.

In the case of Asia and Africa, local patriarchates, he has said, would enable local churches to develop their liturgy, spirituality and practice in accord with their own cultures. This inability, he has said, has been a long-standing complaint from both Africa and Asia.

There is no doctrine of faith or provision of canon law that would prevent the creation of new patriarchal structures in the church, according to Quinn.

Speaking to the priests earlier this month, he related that after finishing his 2013 book, he immediately sent a copy to Francis, who was then only days into his new role as bishop of Rome. Quinn said he received a handwritten note from Francis, thanking him for the book.

Returning to Rome last June, Quinn attended a Mass for some 60 laity and clergy celebrated by Francis in the papal chapel. Quinn said he had the chance to observe Francis up close. "I sat in the first row and I was watching, evaluating everything," Quinn said. "As the Mass progressed, I said to myself that this is all about Christ. There is nothing here centered on the pope himself. I thought this man is very comfortable with himself. He has an internal serenity. He looked serene and at peace."

After Mass outside the chapel, Francis and Quinn met again and Francis thanked Quinn for sending him a copy of his new book. He said that "it was very important," Quinn said.

The germ of Quinn's 1999 book was contained in a well-publicized address he gave at Campion Hall at the University of Oxford on June 29, 1996, the Feast of St. Peter. In that address, the soft-spoken Quinn made headlines calling for implementation of long-delayed Vatican II reforms. In an address titled "The Claims of the Primacy and the Costly Call to Unity," he called for an ecumenical council of bishops to discuss questions left unresolved by the Vatican II.

Speaking again last year on church reform, Quinn told a packed audience at Stanford University in California -- just hours before the College of Cardinals locked itself inside the Vatican to choose a new pope -- that the church was passing through a historic moment unequaled since the Reformation.

The cardinals, he said, "need to see themselves and the whole Catholic church poised at a moment of far-reaching consequences." Key reforms intended by the bishops at Vatican II have not taken place, Quinn lamented. The result has been "ineffective and even dysfunctional governance in the years since the council."

"A very large number of bishops are of the opinion that there is not any real or meaningful collegiality in the church today," he said.

*Editor's Note: An earlier version of this story incorrectly reported that the chance meeting between Quinn and Bergoglio took place in 2013. NCR regrets the error.

A version of this story appeared in the July 18-31, 2014 print issue under the headline: Archbishop carries on push for collegiality.