The quotable Pope Francis: He has a way with words 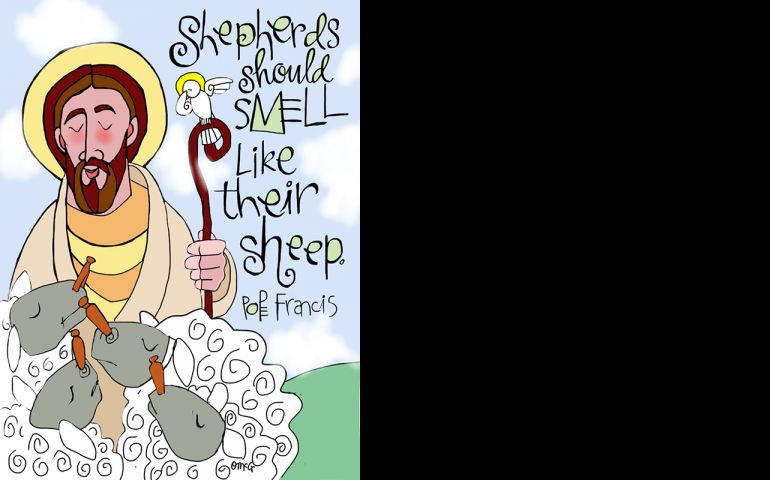 Catholic artist Br. Mickey McGrath’s latest book, “Dear Young People,” was inspired by the quotes of Pope Francis, such as “Shepherds should smell like their sheep.” Photo courtesy of Michael O’Neill McGrath.

With his simple, thoughtful and often pithy comments, Pope Francis is showing himself to be among the most quotable popes. A sampling:

CREATION IS A GIFT

May 21, 2014. Creation is not some possession that we can lord over for our own pleasure; nor, even less, is it the property of only some people, the few: creation is a gift, it is the marvelous gift that God has given us, so that we will take care of it and harness it for the benefit of all, always with great respect and gratitude.

June 5, 2013. (M)en and women are sacrificed to the idols of profit and consumption: this is “scrap culture,” the culture of the disposable. … A person who dies is not a news story, but a 10-point drop in the stock market is a tragedy! So people are discarded, as if they were trash.

June 5, 2013. (W)henever food is thrown out it is as if it were stolen from the table of the poor, from the hungry!

June 20, 2013. It is a well-known fact that current levels of production are sufficient, yet millions of people are still suffering and dying of starvation. This, dear friends, is truly scandalous. A way has to be found to enable everyone to benefit from the fruits of the earth.

Nov. 24, 2013. The culture of prosperity deadens us; we are thrilled if the market offers us something new to purchase. In the meantime, all those lives stunted for lack of opportunity seem a mere spectacle; they fail to move us.

May 16, 2013. The worship of the golden calf of old has found a new and heartless image in the cult of money and the dictatorship of an economy which is faceless and lacking any truly human goal.

June 14, 2013. Christians (must) live and work together in harmony. This makes it easier to contribute to building relations of respect and peaceful coexistence with those who belong to other religious traditions, and with nonbelievers.

July 10, 2013. (B)etween Christians and Muslims, we are called to respect the religion of the other, its teachings, its symbols, its values. Particular respect is due to religious leaders and to places of worship. How painful are attacks on one or other of these!

Nov. 24, 2013. Interreligious dialogue is a necessary condition for peace in the world, and so it is a duty for Christians as well as other religious communities. … In this way we learn to accept others and their different ways of living, thinking and speaking.

Nov. 24, 2013. I have always been distressed at the lot of those who are victims of various kinds of human trafficking. How I wish that all of us would hear God’s cry: “Where is your brother?” Where is your brother or sister who is enslaved? Where is the brother and sister whom you are killing each day in clandestine warehouses, in rings of prostitution, in children used for begging, in exploiting undocumented labor? Let us not look the other way. There is greater complicity than we think. The issue involves everyone!

Oct. 23, 2014. All Christians and men of good will are thus called today to fight not only for the abolition of the death penalty, whether legal or illegal, and in all its forms, but also in order to improve prison conditions, with respect for the human dignity of the people deprived of their freedom. And I link this to life imprisonment. … A life sentence is just a death penalty in disguise.

July 28, 2013. The Church is feminine. She is Church, she is bride, she is mother. But … the role of women in the Church must not be limited to being mothers, workers, a limited role. … No! … I believe that we have much more to do in making explicit this role and charism of women.

Sept. 30, 2013. The feminine genius is needed wherever we make important decisions.

April 29, 2015. Why is it taken for granted that women should earn less than men? No! They have the same rights. This disparity is an absolute disgrace!

July 25, 2013. You young people, my dear young friends, you have a particular sensitivity towards injustice, but you are often disappointed by facts that speak of corruption on the part of people who put their own interests before the common good. To you and to all, I repeat: never yield to discouragement, do not lose trust, do not allow your hope to be extinguished.

GOD IS IN EVERYONE’S LIFE

Sept. 30, 2013. I have a dogmatic certainty: God is in everyone’s life. Even if the life of a person has been a disaster, even if it is destroyed by vices, drugs or anything else — God is in this person’s life.

Sept. 30, 2013. Instead of being just a church that welcomes and receives by keeping the doors open, let us try also to be a church that finds new roads, that is able to step outside itself and go to those who do not attend Mass, to those who have quit or are indifferent.

Sept. 30. 2013. I see clearly that the thing the church needs most today is the ability to heal wounds and to warm the hearts of the faithful; it needs nearness, proximity. I see the church as a field hospital after battle. It is useless to ask a seriously injured person if he has high cholesterol and about the level of his blood sugars! You have to heal his wounds. Then we can talk about everything else.

Nov. 24, 2013. The Church must be a place of mercy freely given, where everyone can feel welcomed, loved, forgiven and encouraged to live the good life of the Gospel.

NOT A PRIZE FOR THE PERFECT

Nov. 24. 2013. The Eucharist … is not a prize for the perfect but a powerful medicine and nourishment for the weak.

Feb. 14, 2014. The perfect family doesn’t exist, nor is there a perfect husband or a perfect wife, and let’s not talk about the perfect mother-in-law! It’s just us sinners.

GAYS OF GOOD WILL

July 29, 2013. If someone is gay and he searches for the Lord and has good will, who am I to judge? We shouldn’t marginalize people for this. They must be integrated into society.

Sept. 30, 2013. If one has the answers to all the questions — that is the proof that God is not with him. It means that he is a false prophet using religion for himself. The great leaders of the people of God, like Moses, have always left room for doubt.

March 28, 2013. The priest who seldom goes out of himself … misses out on the best of our people. … This is precisely the reason for the dissatisfaction of some, who end up sad priests … instead of being shepherds living with “the odor of the sheep.” This I ask you: be shepherds with the “odour of the sheep,” make it real, as shepherds among your flock.

Jan. 30, 2014. I cannot imagine a Christian who does not know how to smile. May we joyfully witness to our faith.

Oct. 19, 2014. God is not afraid of new things! That is why he is continually surprising us, opening our hearts, and guiding us in unexpected ways.

THE POPE IS A MAN

March 5, 2014. Depicting the pope as a sort of superman, a star, is offensive to me. The pope is a man who laughs, cries, sleeps calmly, and has friends like everyone else.

People | The quotable Pope Francis: He has a way with words

Look for a ‘Francis effect’ at the voting booth, not in the pews

Holiness does not come from following rigid rules, pope says