Raised right, he plays for the Giants now 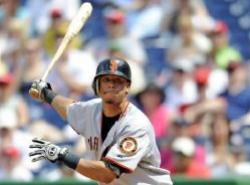 Allen and Denise Burriss have taken in the baseball games of their son, Emmanuel, hundreds of times.

In the early days of their 30-year marriage, the native Washingtonians were Little League regulars. Then it was high school, college and Cape Cod League games. These days they show up at major league parks, as when the San Francisco Giants were here in early June for three games with the Washington Nationals.

Emmanuel, brought up from the Fresno Grizzlies last year, started this season as the Giants’ second baseman. At 6’2” he is quick-handed in the field and a line-drive hitter at the plate.

How this 2003 graduate of Wilson High School and the first Washingtonian in 28 years to play in the majors made it to the rarefied heights of professional ball is as much a story of two college-educated parents who took seriously their vocation of child-raising as it is of their son’s drive to excellence.

Two hours before game time the other evening, and sitting with her husband six rows up from the Giants’ dugout on the third base side while Emmanuel and the team were taking batting practice, Denise Burriss offered her philosophy of mothering: “My own grandparents and parents taught me that you treat people the way you want to be treated. That’s number one, the Golden Rule. And second, no matter what you do, always put God first. That way, everything falls into place. Work becomes play, play becomes work. Those were the fundamentals in Emmanuel’s life.”

That spiritual bent of Denise Burriss, who works in Washington’s department of Employment Services, comes naturally. Ordained in 1991 in the African Methodist Episcopal church, her freelance ministry currently includes conducting what she calls “serenity yoga workshops.”

Growing up in a devout family, and attending St. Ann Catholic Elementary School, Emmanuel, now 24, has been an unwavering keeper of his parents’ Christian faith. So much so that he makes the sign of the cross before every inning and every time at bat: “That’s my way of thanking Jesus and God while I’m out there playing.” Angels in the outfield sing at such talk.

I’ve known Emmanuel for much of his life, when as a 9-year-old he spent summers at Home Run Baseball Camp at Friendship Playground in Northwest Washington. The camp was run by my son, John McCarthy.

In drills and practices, Emmanuel appeared to be just another happy camper, except for one quality: He craved to be coached. Seeing the lad’s appetite, John fed it.

When other boys and girls left the playground at 3 o’clock and scurried to the Good Humor truck at the camp entrance, Emmanuel routinely stayed on for an extra hour or two of fielding grounders from John, chasing fly balls, taking cuts in the batting cage, learning to switch hit. Soon becoming a mentor, and seeing that Emmanuel’s passion for baseball wouldn’t wane or be given over to soccer, basketball or other sports as often happens at 13 or 14, John gave Emmanuel his first job: a junior coach at the camp.

At first, this rough diamond’s talents for work weren’t equal to his talent for play. John fired Emmanuel twice: once for coming to camp with unshined shoes. That offense was horrendous enough, until Emmanuel really lost it. One morning he came to work only five minutes early, not an hour early. Let the court docket show, both were one-time one-day suspensions. Shaped up and on board, Emmanuel later went on three trips with John to the Dominican Republic to work at Beisbol y Libros, a literacy program at a Catholic school in Consuelo.

Before the game with the Nationals, I spent time with Emmanuel in the Giants’ clubhouse. He is innately modest as well as graceful in giving full due to all those -- his parents, coaches and teammates -- who helped him along the climb. Bruce Bochy, the Giants’ manager who has seen all kinds in 35 years of pro ball, calls Emmanuel “a strong person spiritually and physically. He’s grown so much in the last year and half. We’re glad to have him. ... He’s been raised right. He’s very polite and is popular on this team.”

Currently, Emmanuel is on the disabled list, following a foot injury sliding into base. But in the three games against the Nationals, he showed electricity: a double and two singles, no errors and a diving run-saving catch. Coming off the field between innings, he waved several times to his parents, six rows up and practicing yoga serenity.

People | Raised right, he plays for the Giants now

At St. Mary, one man was custodian of all of us