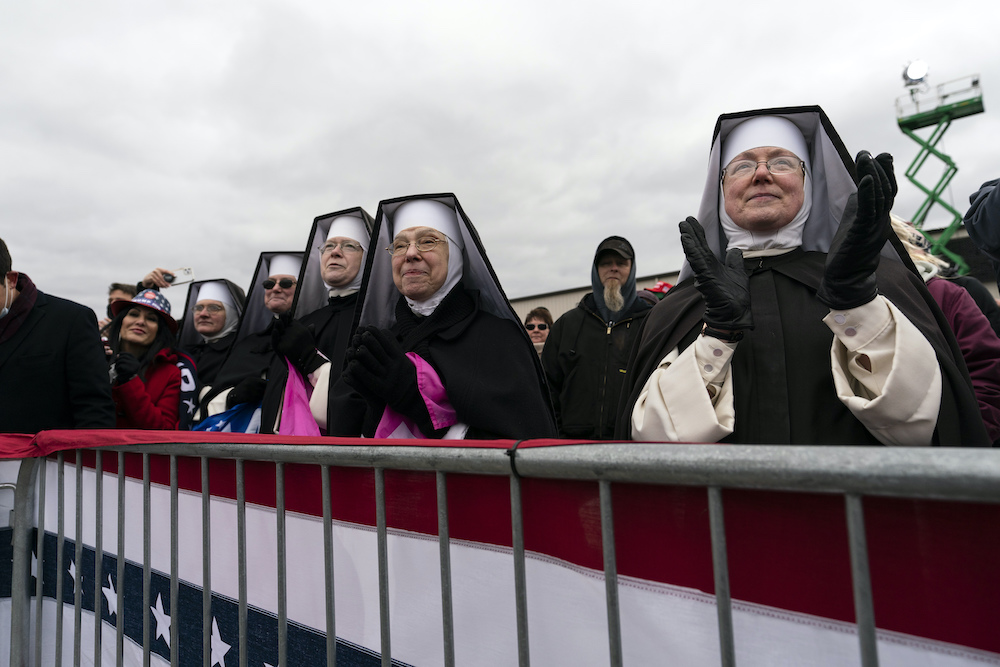 Members of the Dominican Sisters of the Immaculate Heart of Mary, based in Hartland, Michigan, and whose community does not have canonical standing with the Catholic Church, applaud as then President Donald Trump speaks at a campaign rally at Oakland County International Airport, Oct. 30, 2020, in Waterford Township, Michigan. (AP/Alex Brandon)

For many Americans, Donald Trump will be remembered as the "fake news" president for his constant lambasting of the media. And, despite telling more than 30,000 lies during his four years in office, among those who supported him with vigor: fake nuns.

During the final days of the bruising presidential contest —  at a time when both Trump and then former Vice President Joe Biden were making a concerted effort to win the Catholic vote — Trump singled out a group of sisters at a rally in Michigan.

Earlier in the month, the president had been diagnosed with COVID-19, and back on the stump, he described being given the drug "Regeneron" to help with his treatment. He then turned to the nuns and said, "The next morning, Sister, I woke up and it was like God touched my shoulder."

Yet it turns out that the much photographed five nuns in full habit, some holding Trump campaign signs, at that rally aren't nuns at all, at least nuns that are in communion with the Roman Catholic Church.

"The Dominican Sisters of the Immaculate Heart of Mary are not, at present, in full communion with the Catholic Church and thus have no canonical standing within the Church," a spokesman for the Diocese of Lansing, Michigan, told NCR via email.

The Leadership Conference of Women Religious and the Council of Major Superiors of Women Religious, the two associations of Catholic women religious in the United States, also confirmed to NCR that the Dominican Sisters of the Immaculate Heart of Mary are not members of either body. They are also not listed in the Official Catholic Directory, the only authorized directory listing official Catholic institutions and organizations.

According to the website of the traditionalist Michigan "order," based in Hartland, Michigan, the "primary objective of the Congregation of the Dominican Sisters of the Immaculate Heart of Mary is to restore and preserve the traditional Dominican conventual life in the United States."

No phone number or email address is publicly available, and NCR was unable to obtain comment.

"This is their privilege, to chant the official prayer of the Militant Church, praising God in the inspired words of the ancient psalms, giving echo to the hymn of praise which the Church Triumphant sings everlastingly to God," their website states.

The traditionalist group's site also includes photos of women playing instruments, collecting eggs on a farm and at prayer in a chapel. Inside the chapel is an American flag and one bearing the arms of the Holy See under sede vacante, used after the death or resignation of the pope, or by traditionalist groups that do not accept the validity of the pope.

The only other available page on the sparse website is an option to donate. Despite its location in Michigan, the group is registered as a foreign nonprofit corporation with an address in Connecticut and an incorporation date of March 21, 2001.

Clip from then President Donald Trump's rally Oct. 30, 2020, in Waterford Township, Michigan, posted on YouTube by The Hill; remarks to the sisters begin at the 53-second mark

Historically, religious institutes have begun when founders have gathered people together around them for a particular service and eventually go on to seek formal recognition from the church.

"If people present themselves as religious with no recognition by the church, it's a misrepresentation and can cause scandal on the part of those who believe that they are legitimate and recognized religious in the church," Mercy Sr. Sharon Euart, executive director of the Resource Center for Religious Institutes, told NCR.

Despite the fact that the Dominican Sisters of the Immaculate Heart of Mary are not in communion with the church, other religious sisters did show up on the campaign trail, including the Ohio-based community of women religious known as the Children of Mary who had front row seats behind the president while they wore MAGA masks at his rally. Also, and perhaps most notably, Sr. Deirdre Byrne — a member of the Little Workers of the Sacred Hearts —  spoke at the Republican National Covention and said, "Donald Trump is the most pro-life president this nation has ever had."

But the ones in Michigan? Fake nuns and more fake news.

Read this next: Sisters: The wisdom in not endorsing politicians
A version of this story appeared in the Feb 19-March 4, 2021 print issue under the headline: Michigan nuns at Trump rally aren't really nuns.