Rowland, NCR board member, dies at 78 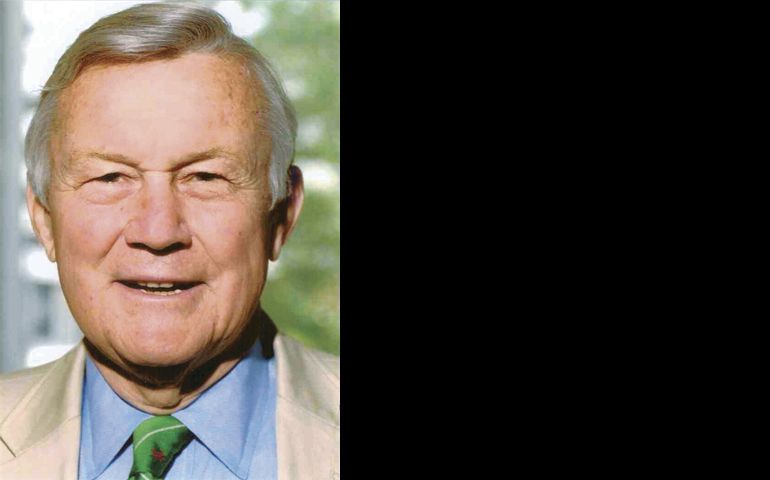 For more than a year, Rowland had struggled with mesothelioma, according to his family. The funeral service and reception for Rowland were held Jan. 8 at Grace and Holy Trinity Cathedral in Kansas City.

In a note to NCR board members after Rowland's death, former NCR publisher Tom Fox recalled his first encounter with Rowland more than 25 years ago, "when he began sending me clips of NCR articles he particularly enjoyed. We began going out to lunch about once a month. He had a keen interest in NCR and recently told me he viewed it as 'the most important publication in America.' He believed it was critical that NCR report the news independently and through a Christian value driven lens."

While at Dartmouth, he met his wife, Sarah Fidler, a student at Smith College. They were married Dec. 29, 1959, in Moberly, Mo. They had a daughter, Liza, and two sons, Matthew and Joshua, as well as son Benjamin, who died in early infancy.

Rowland joined Watson Ess Marshall and Enggas in Kansas City in 1962 and practiced antitrust and intellectual property litigation until 1980. He then joined Kansas City Southern Industries, becoming president and chief operating officer in 1983 and CEO in 1987.

Rowland worked with a number of community organizations in Kansas City. He was board chairman of the Swope Ridge Geriatric Center for 25 years, and served as chairman of the Local Investment Commission (LINC) from 1995 to 2014.

With LINC, he developed its Caring Communities program and helped shape the sale of Kansas City's charity care hospitals to HCA Midwest Health. Proceeds from the sale went toward creating a foundation to ensure access to health care for the disadvantaged in Kansas City. When HCA failed to live up to its charity commissions, Rowland pushed the foundation to sue HCA. The foundation was awarded $433 million in a lawsuit.

He and Sarah were also major supporters of the arts, as Rowland served in leadership roles for the Lyric Opera and the Metropolitan Performing Arts fund. The couple also supported the Kansas City Ballet and the Kansas City Symphony, among others.

"Dining with him over lunch was always a strenuous mental exercise," Fox wrote. "He was so bright and his interests so wide you'd end up exhausted trying to keep pace, and trying not to sound foolish as he jumped unpredictably from subject to subject. He was a very principled person and cared deeply for the underdog. He was keen on early education and very keen on supporting Kansas City and the community."

Rowland was elected to the NCR board of directors in November 2002, the same time as Annette E. Lomont, Patrick J. Waide Jr., and Fr. Charles E. Curran. Rowland served for nine years.

"I have many memories of Landon, both funny and deep," said Lomont, former NCR board president and now emerita director. "We referred to ourselves as the Class of '02, as that was the year we both joined the NCR board. Landon was proud to be a Kansas Citian. His philosophy was simple: If you worked for NCR, you should live in Kansas City. If you ate in Kansas City, you should order beef."

Rowland served the NCR board as a member of the Finance Committee for 12 years, eight of them as chair. In May 2011, he was named director emeritus and continued attending board and company functions as late as October 2015.

"He was ready to help NCR in any capacity," Lomont said. "During my years as board chair, any request I made of Landon was met with the same response: 'I'm at your service.' I will miss Landon, a good friend and great champion of NCR."

Waide, a former NCR board chair and now emeritus director, recalled Rowland as coming to board meetings "with a high degree of energy for the NCR mission." Rowland called NCR "the little Kansas City paper that had a global reach."

"Landon's very vocal and enthusiastic support of Sr. Rita Larivee, then an NCR associate publisher, when she recommended to the NCR board the creation of NCRonline.org and the related technology enhancements, was crucial for the transformation of NCR for the digital age," Waide added. Larivee, a Sister of St. Ann, would later be named NCR publisher.

"He also had a grand sense of humor," Fox wrote. As an example, he cited Rowland's coming to NCR headquarters to play a doorman for a 50th anniversary video produced for NCR's October 2015 conference at Dominican University outside Chicago.

Fox continued, "In his last days, as he grew weaker, he stayed with family and read his letters. … We will all miss Landon and hold him and his family in our prayers."