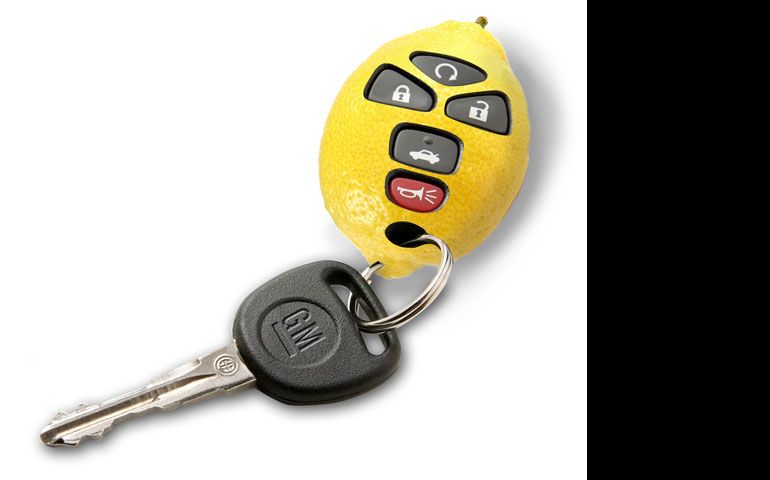 Amid the dark rot of malfeasance at the core of General Motors' long and sorry history of vehicle recalls stands Louis Lombardo. He directs Care for Crash Victims, a Bethesda, Md., research, writing and consulting firm that issues monthly reports on auto safety -- or just as often the lack of it. He works from a small canvas, but his portraits are large of a company whose decades of recalls of millions of cars defy accurate recalling.

Lombardo is everything GM is not: conscientious, transparent and caring.

In mid-April, GM, the whale of the American auto industry that swallows the krill of profits in huge gulps, was fined $35 million by the National Highway Traffic Safety Administration (NHTSA). Some 2.7 million GM autos were found to have defective ignition switches, causing losses in brake, steering and air bag power. At least 13 people were killed in crashes going back to 2004, a count thought to be low. The $35 million fine itself is low, tollbooth change when compared with the $37 billion in GM revenue in only the first quarter of this year. It was in 2001 that company officials knew of the flaw, and 13 shameless years before a recall.

Moons ago, and going on more than four decades, I came to know Lombardo. I wrote about his tireless and crucial work in columns for The Washington Post. Since the mid-1960s, when he joined the Public Health Service's division of air pollution control and for 27 years when he served in National Highway Traffic Safety Administration, he was one of a small group of safety advocates -- including Ralph Nader, Joan Claybrook, and Clarence Ditlow of the Center for Auto Safety -- who could be trusted by congressional committees and the media for accurate information on the corruptions and deceits of the auto industry.

Lombardo, 77, is the son of Sicilian immigrants who settled in the Ridgewood section of Brooklyn, N.Y., in the early 1900s. He went to local Catholic schools and then earned a degree in physics in 1965 from the University of Hartford.

"What's been unfolding," he told me at an outdoor eatery in Bethesda on the sunny afternoon of June 5, "is a massive cover-up by both General Motors and NHTSA. Off and on for decades, the agency has been under the influence of the company. The examples are never-ending about regulatory officials leaving their government jobs and finding lucrative employment with the industry they were once supposedly regulating. Sometimes they are federal lawyers who join firms, there to influence pending legislation or argue against enforcement. This is corruption enough, except uncounted people have been and are being killed or injured by this buddy system."

Since the early days of the automobile, the industry has contumaciously blamed driver errors for roadway fatalities -- currently nearly 100 deaths a day. "Yes," Lombardo said, "drivers do make mistakes but do they deserve to die because safer cars are not being designed? Every secretary of transportation comes into office preaching that auto safety is the highest priority. What's the department's budget for safety? Less than 2 percent. Only about $10 million goes for the office of defect investigation."

On June 5, following a GM-paid internal report, GM announced it was firing 15 employees for their roles in the lethal ignition case. The sacking leaves unanswered a question: that's all? Thirteen people, and possibly more, are dead and no one at GM will be prosecuted or imprisoned for negligent homicide? What about punitive damages for the families of the victims? Why are gag orders placed on pretrial settlements?

What about further investigations of why GM, in one recall after another, can't produce defect-free cars? Does the company hire engineers and assembly-line mechanics unable to get the hang of their work? This year's recalls total 11.2 million and counting. And what about paying the millions of car owners for the bother of hauling their lemons to dealers for the fixes? Why not require all GM ads and commercials to state the number of deaths and injuries its cars caused in the past 50 years, like warnings in cigarette ads?

More hearings in Congress may provide some answers. Democratic Sen. Richard Blumenthal, a former prosecutor in his home state of Connecticut, called the June 5 report the best that "money can buy. It absolves upper management, denies deliberate wrongdoing and dismisses corporate culpability."

For Lombardo, the issue for GM and the auto industry is more morality and less mortality. If he is called to testify at the hearings, either before or after the GM spinners, I'll be there.

[Colman McCarthy, a former Washington Post columnist, directs the Center for Teaching Peace, a Washington nonprofit. His books include All of One Peace and I'd Rather Teach Peace.]