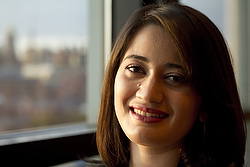 Rosibel "Rosy" Mancillas Lopez, a law student and advocate for immigration reform from San Diego, is the recipient of the 2011 Cardinal Bernardin New Leadership Award. She is pictured before receiving the award during the U.S. bishops' meeting in Baltimore Nov. 14. (CNS photo/Nancy Phelan Wiechec)

BALTIMORE -- When Rosibel Mancillas Lopez meets undocumented immigrants living in the shadows of mainstream U.S. culture, she goes into action.

She tells them they have basic rights under the law, despite their lack of citizenship. She explains Catholic teaching and its promotion of human dignity. She points them to avenues where they can advocate for changes in U.S. immigration law.

Enrolled in the University of San Diego law school, Mancillas, 24, has taken a similar message to students on campus, where she organizes monthly trips to Tijuana, Mexico, in an effort to breach the cultural chasm.

Mancillas was honored for her advocacy work on behalf of immigrants Nov. 14 by the Catholic Campaign for Human Development, which presented her with the Cardinal Bernardin New Leadership Award during the U.S. bishops' fall meeting. The award honors a young adult for leadership in fighting poverty and injustice.

As Mancillas sees it, her efforts follow her desire to live the Gospel.

The fact that Mancillas and her family -- mother Rosa, father Porfirio, and two brothers, Porfirio Jr., and David -- lived in the shadows for eight years in the 1990s before they became U.S. citizens also has a lot to do with what she finds has become her life's calling.

"Something that has had a strong impact on me is Catholic social teaching, in particular the teaching on human dignity and the right of everyone to have labor and work," said Mancillas, who plans to become an immigration attorney. "Related to this is immigration in the sense that immigrants are stripped of their human dignity just because they were born in a different part of the world.

Mancillas' advocacy work started in 2009 at Holy Family Parish, which was part of the San Diego Organizing Project, a CCHD-funded community group working on immigrant rights issues. She helped build a program that educated immigrants about their rights and how to follow the path to citizenship.

The project was turned over to the parish and that's when Mancillas began focusing on the student community at the university. The monthly trips to Tijuana include a stop at the imposing border fence to examine the barrier that separates the two countries. The stop gives participants the opportunity to look at the crosses and other memorials hung on the Mexican side of the fence recalling those who have died trying to cross into the U.S.

The students also work with children and people with AIDS.

Bishop Jaime Soto of Sacramento, Calif., chairman of the bishops' Subcommittee on the Catholic Campaign for Human Development, commended Mancillas for her work to "create a community where the dignity of all is respected."

"As you work to give voice to the voiceless, especially to immigrants, you give us great hope, Bishop Soto told Mancillas in presenting the award.

Mancillas told the bishops during a reception at the bishops' conference that her work as an advocate for immigrants brings great joy to her life.

"I feel very undeserving, but receiving this award is a strong affirmation for me to continue doing the work I am doing," she said. "I take it as God finally responding with a strong yes to the question I ask him every day: 'Is this what you want me to do?'"