Sartain to LCWR assembly: I'm here 'as a brother and a friend' 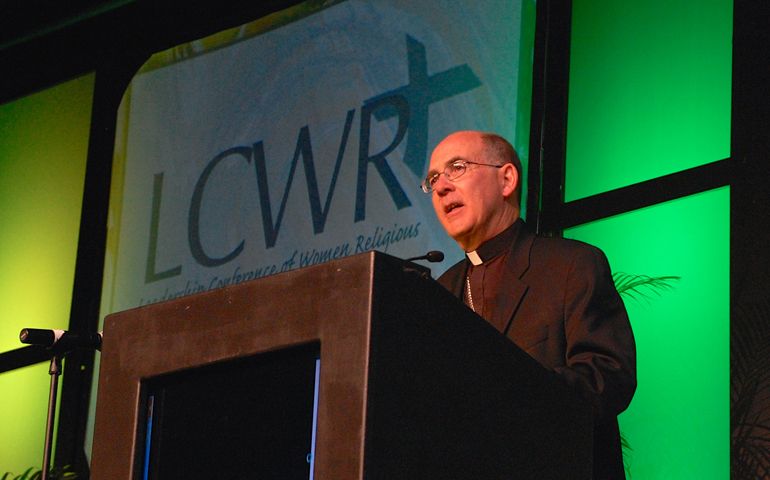 Seattle Archbishop J. Peter Sartain speaks Tuesday to members of the Leadership Conference of Women Religious at the welcoming ceremony for the group's annual assembly in Nashville, Tenn. (Dan Stockman)
This article appears in the LCWR 2014 feature series. View the full series.

Nashville, Tenn. — Seattle Archbishop J. Peter Sartain, the Vatican-appointed head of the effort to reform the largest leadership organization for U.S. women religious, is attending the sisters' annual assembly "as a brother and a friend."

But the gathering is under a cloud, and Sartain is its American face: LCWR has been undergoing a Vatican-ordered doctrinal assessment since 2009. Following the investigation, in 2012, the Congregation for the Doctrine of the Faith ordered LCWR to reform its statutes and appointed Sartain to oversee changes. After this assembly, Sartain must approve speakers at the group's events.

But there was no mention of those troubles at Tuesday's welcoming ceremony, which opened with music, song and interpretive dance. Sartain thanked the LCWR members for "an extremely warm welcome" and noted that as a native Tennessean, he was able to welcome them to his home state, a place where faith is a strong tradition.

LCWR members also heard from a voice perceived to be much friendlier to their cause: Fr. Hank Lemoncelli, who read a message from Cardinal João Braz de Aviz, who has led the Vatican's Congregation for Institutes of Consecrated Life and Societies of Apostolic Life since 2011. Last year, Braz de Aviz said the decision to put LCWR under the control of bishops was made without his knowledge, though his office normally deals with matters of religious life. The move, he said, caused him "much pain."

The message read was a series of questions Braz de Aviz is posing to all consecrated religious around the world during the Year of Consecrated Life, asking each order to examine its priorities and motivations. Though the questions were not directed at LCWR specifically, given the criticism the group has received, they caused murmurs throughout the crowd when Lemoncelli read them. Braz de Aviz presented the same list of questions to the annual assembly of the Conference of Major Superiors of Men, which met Aug. 6-9 in Pittsburgh. Pope Francis has called for a special reflection on consecrated life beginning Advent 2015 and running a year.

The doctrinal congregation's report on LCWR says certain LCWR presentations "risk distorting faith in Jesus and his loving Father who sent his Son for the salvation of the world" and "even undermine the revealed doctrines of the Holy Trinity, the divinity of Christ, and the inspiration of Sacred Scripture."

The LCWR members were welcomed to the assembly by Region 6 chair Sr. Sharon Sullivan, who appeared at the podium in a hat made famous by Grand Ole Opry star Minnie Pearl, drawing laughter and applause. The assembly is being held at the Gaylord Opryland resort.

The night's keynote speaker was Sr. Nancy Schreck, a Franciscan sister and a past LCWR president, who quoted Isaiah 45:3: "I will give you the treasures of darkness, riches hidden in secret places, so you will know it is I, the God of Israel, who calls your name."

Schreck pointed out that while modern society has given evil connotations to darkness, there is a long biblical history of God working through people in the dark. She noted that the Exodus took place at night, that manna fell from heaven at night, and that much about God is cloaked in mystery.

The assembly concludes Friday evening, when St. Joseph Sr. Elizabeth Johnson is to receive LCWR's Outstanding Leadership Award. Johnson, a noted theologian widely considered one of the architects of feminist theology, was criticized in 2011 by the U.S. Conference of Catholic Bishops' Committee on Doctrine, saying her 2007 book, Quest for the Living God: Mapping Frontiers in the Theology of God, is not in accordance with official Catholic teaching and "completely undermines the Gospel and the faith of those who believe in that Gospel."

The Vatican criticized the selection of Johnson as the recipient of the award, which led to the order that Sartain approve speakers and honorees at all events after this one.

People | Sartain to LCWR assembly: I'm here 'as a brother and a friend'

A turbulent year that strengthened the papacy