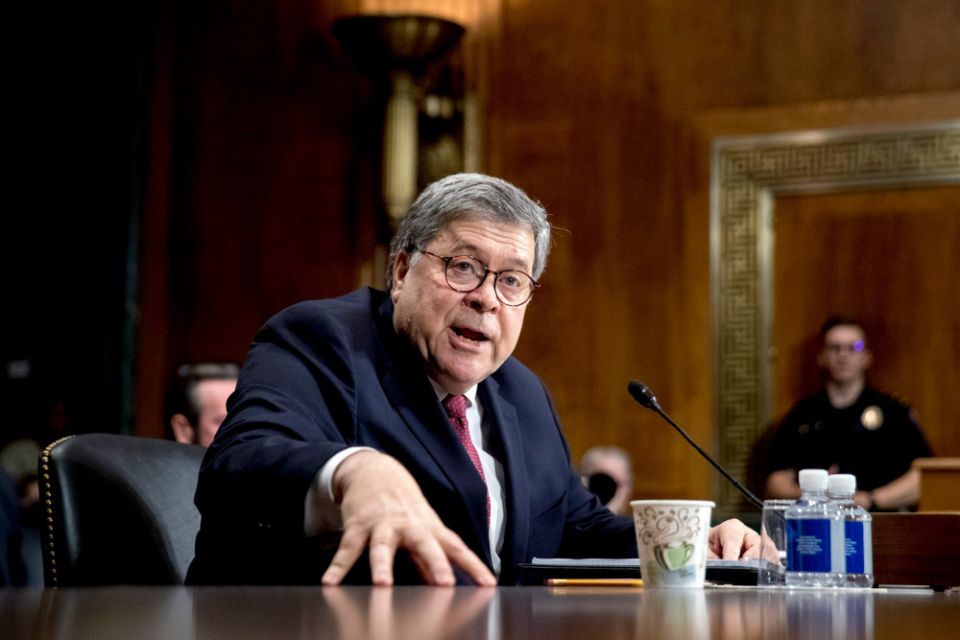 Attorney General William Barr testifies during a Senate Judiciary Committee hearing on Capitol Hill in Washington on May 1, 2019. The Justice Department says it is willing to provide the House intelligence committee with documents from special counsel Robert Mueller’s investigation, as long as the panel agrees not to take any action against Barr. (AP File/Andrew Harnik)

Prayer breakfasts are generally not controversial events in the Catholic world. They are called to celebrate high school graduations, just to network and get together for a morning meal and prayer. Not so this year's National Catholic Prayer Breakfast in Washington. The 16th annual gathering is dividing Catholics along partisan lines because it will honor President Trump's attorney general, William Barr, a little more than a month before the November election.

The breakfast is normally held earlier in the year, but it was postponed because of the COVID-19 pandemic and now will meet virtually on Sept. 23.

This is a new award created in 2019, according to the NCPB website, which speaks of the "thousands of thriving apostolates, ministries, and charities tending to the needs of so many – especially in the areas of education and health care." The award, it says, was created "to help highlight these good works and those who serve the Church so well." The citation reads: "In Honor and Gratitude for Fidelity to the Church, Exemplary Selfless and Steadfast Service in the Lord's Vineyard."

Prominent Catholics who disagree that Barr deserves such an award are citing the federal government's decision to reinstate the federal death penalty, which is opposed by Pope Francis and the U.S. bishops, in July.

"I raise my voice in fervent opposition to the National Catholic Prayer Breakfast's scandalous offer of an award to Attorney General Barr for his 'exemplary Christlike' behavior," tweeted Sr. Helen Prejean. "I urge the group to immediately rescind their invitation, and I urge anyone reading this to join me."

It is "unconscionable and scandalous that this recognition be given to William Barr who only two months ago reinstated the Federal death penalty after a 17-year discontinuance," says the Rev. Michael Bryant, a Catholic priest and former prison chaplain. He notes that five men have already been executed and two more will be killed, one on the day before the breakfast and another on the day after.

The Catholic Mobilizing Network, which opposes the death penalty, has a petition that already has over 6,000 signers calling on Barr to "Stop the executions!"

The decision to give Barr the award is "shocking, incomprehensible, and scandalous," according to the Association of U.S. Catholic Priests. "Executions are clearly not pro-life," said the association. "Pope St. John Paul II judged such actions as 'unnecessary.' Pope Francis defined them as 'inadmissible.' That position of the Magisterium is now affirmed in the Catechism of the Catholic Church."

They also accused Barr of showing "disrespect for sacred space when he was party to a recent show of force to enable the President to use the grounds and building of an Episcopal Church in Lafayette Square to hold up a bible in front of the church as a prop for a political photo op."

Also tweeting against the award is Stephen Schneck of the Franciscan Action Network: "Barr personally restarted the federal death penalty. Willingly supported the separation of children from parents at the border. Directed the attack on protesters to give Trump a photo op with a Bible. The National CATHOLIC Prayer Breakfast needs to change its name."

The Franciscan Action Network, in cooperation with Faith Action Network, released a letter to Barr with more than 200 Catholic priests, sisters, theologians and lay leaders expressing "our sorrow and concern regarding your cooperation with this Administration's many policies and actions that are at odds with our faith's teachings." That Barr is accepting the award on "a day sandwiched between two federal executions that you arranged is utterly shocking and an affront to our faith."

The death penalty is not the only issue that's causing rancor about Barr's award.

"There is no overlap between the gospel message and the Attorney General's support for caging immigrant children, teargassing nonviolent protesters, executing fellow human beings, the sexual assault of women, racist rhetoric and the blatant disrespect for human dignity that runs rampant with this administration," complained Johnny Zokovitch, executive director, Pax Christi USA, referring to recent Trump administration actions and the president's alleged behavior in the past. "The National Catholic Prayer Breakfast should be ashamed." 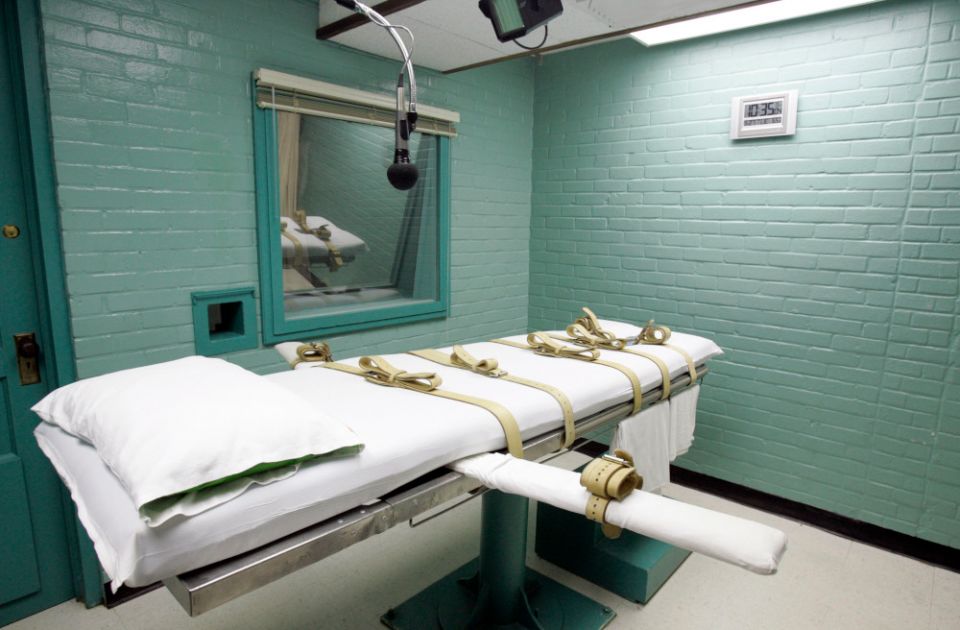 Prominent Catholics who disagree that Barr deserves such an award are citing the federal government's decision to reinstate the federal death penalty, which is opposed by Pope Francis and the U.S. bishops, in July. (AP)

Critics complain not only about the honoree, but the timing of the breakfast, which could have been postponed until after the election to avoid partisan overtones: The conservative tilt of the NCPB has led some Catholics to call on it to change its name to the National Republican Prayer Breakfast.

Joseph Cella, a founder of the breakfast, was chief liaison to Trump for Catholic issues in the 2016 campaign. When John Podesta's emails were hacked, Cella said that they revealed "the open anti-Catholic bigotry of her (Clinton's) senior advisers, who attack the deeply held beliefs and theology of Catholics." (Podesta is a Catholic.)

The current NCPB president, Leonard Leo, is co-chairman of The Federalist Society, which has influenced judicial appointments under the Trump administration. Other NCPB directors also lean right.

The speakers at the breakfast through the years also show a definite Republican tilt. President George W. Bush addressed the breakfast annually from 2005 to 2008. Vice President Mike Pence addressed it in 2017. He assured the group that "American Catholics have an ally in President Donald Trump."

The lone Democratic politician to speak at the breakfast seems to have been Representative Bart Stupak, a pro-life Democrat who later did not seek reelection. No Catholic from the Obama administration ever spoke at the breakfast.

Chaput, the retired archbishop of Philadelphia, had been scheduled to speak at this year's breakfast but had to withdraw when it was rescheduled. However, his planned speech was published by the conservative Catholic journal First Things. "We're honoring Attorney General Barr today," he wrote, "and I have a word to say about that. It's 'amen.'" Chaput wrote that he has most admired throughout his life those "who have all had the same qualities: a thinking Catholic brain, a character of substance, and a moral spine. General Barr has all three."

"As an added bonus," he continued, "he's disliked by all the right people."

Though the breakfast is a lay event, the silence of the bishops about Barr's award has galled some Catholics. "Many bishops and Catholic activists waged an often ugly campaign against the University of Notre Dame when the school gave President Obama an honorary degree," said John Gehring, Catholic program director at Faith in Public Life. "But there is silence when the most influential Catholic in the Trump administration is about to be honored by a Catholic organization despite playing a key role in implementing a policy in direct contradiction to Catholic teaching.

"Those different reactions from the hierarchy," Gehring said, "reveal a lot about the selective policing of Catholic identity and sends a message that the church is willing to stay quiet if speaking out will upset powerful Republican leaders and conservative donors."

Critics of the award are also criticizing Robert Barron, auxiliary bishop of Los Angeles, who will speak at the breakfast. Some are calling on him to withdraw; others want him to reaffirm church teaching against capital punishment at the breakfast. Barron is among the savviest American bishops when it comes to communicating and has a large following on the internet.

Will Sipling, communications director for Barron's Word on Fire Catholic Ministries, defends the bishop. "He has agreed to this event as a teacher of the Faith and an evangelist," said Sipling by email. "He is not making a political statement."

It's true that, strictly speaking, the breakfast addresses questions of Church teaching as it relates to public policy. At the last breakfast, in April 2019, preservation of the family, marriage and the unborn were the main themes. The speaker, Bishop Thomas Olmsted of Phoenix, one of the more conservative Catholic bishops, advocated for the Born-Alive Abortion Survivors Protection Act and against "gender ideology," which he believes threatens marriage.

But another speaker was Mick Mulvaney, then-acting White House chief of staff and director of the Office of Management and Budget, who praised President Donald Trump's commitment to religious liberty.

"The president has allowed us Christians, of all denominations, to be very vocal about their faith and to prioritize our faith," Mulvaney told the gathering, according to Catholic News Service. "Over the past two-and-a-half years, I think you can see the principles of our faith being manifested."

"The principles of our faith are alive and well and well respected in this administration and driving many of our policies," Mulvaney asserted.

Editorial: Thank the sisters for the deacons commission