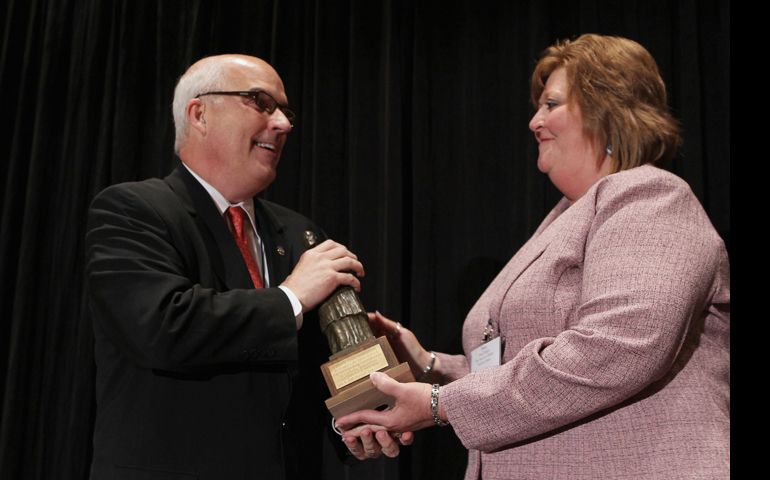 The forced resignation of Tony Spence as executive editor of Catholic News Service raised questions about the consequences of an editor issuing opinionated tweets, the influence of outside groups on CNS personnel decisions and the susceptibility of the news agency to such outside influences.

It appears, however, that none of those issues will be aired in a public way any time soon.

Spence was forced to resign by Msgr. J. Brian Bransfield,* secretary general of the U.S. Conference of Catholic Bishops, following a series of attacks by bloggers for far-right websites objecting to the editor's recent tweets in opposition to proposed and recent legislation in a number of states designed to limit LGBT rights.

In an April 14 interview with NCR, Spence said Bransfield asked for his resignation "because the conference had lost confidence in my ability to lead CNS." He also said, "The far right blogosphere and their troops started coming after me again and it was too much for the USCCB."

Spence has a long and distinguished career in Catholic journalism, and was widely acknowledged as a strong leader of the news service. The Catholic Press Association recognized his stature in 2010 by bestowing on him its highest honor, the St. Francis de Sales Award.

A request to interview Bransfield brought the response from a conference spokesperson: "The Conference isn't adding to what's already public around Tony's departure." Archbishop Joseph Kurtz, president of the USCCB, referred NCR to James L. Rogers, chief communications officer for the conference, who told NCR the day of the resignation that Spence had "stepped down" and that he did not know what had precipitated the resignation.

Tim Walter, executive director of the Catholic Press Association, explained in a phone interview the day after Spence resigned that he had not received any notification from the USCCB. He said he had seen and heard of a lot of interest and conversation on social media "among people wondering what is happening," but had not received any inquiries from any of the member organizations.

"Theoretically, the CPA has no legal power over any of its member organizations," many of which receive news produced by CNS. He noted that a liaison committee of the CPA meets annually with CNS to discuss the service, its products and rates and that it may be the place where questions about the Spence resignation would be addressed. Otherwise, no formal mechanism exists for addressing such a matter, he said.

Musacchio, who succeeded Spence as editor of the Tennessee Register, the newspaper of the Diocese* of Nashville, is also a long-time friend of Spence. He said he's "known Tony to be a solidly professional journalist and dedicated to the church at the local, national and international level. I've known other people who have lost jobs at companies, some journalists within the secular media for expressing opinions on social media. This entire matter has been terribly unfortunate."

Spence was editor-in-chief and general manager of the Register from 1989 to 1998. Prior to that he was associate editor and managing editor. From 1994 to 1996, he served as Catholic Press Association president and oversaw establishment of the Catholic Advertising Network and the Catholic Press Foundation.

Musacchio, asked if he or other members of CPA, were concerned about the influence of outside groups on the hiring and firing of CNS personnel, responded: "For the many years that I have been on the liaison committee and during my time as chair, the committee has consistently emphasized the point, beyond any particular individuals, that as clients, we need a news service that covers the church, from Rome to the local level, with an understanding of church teaching but free from personal biases or the influence of particular agendas."

He added that the CPA Fair Practices Code sets forth principles derived from the faith "and is similar to the guidelines set forth by many professional journalistic organizations."

Musacchio said he has spoken to other editors who have "a concern for Tony, personally, and hope that he will land on his feet."

The Catholic Press Association of the United States and Canada has about 750 individual members and represents five national newspapers from the U.S. and Canada, 125 diocesan newspapers, 19 diocesan magazines, and 52 magazines published by Catholic institutions, religious orders and other Catholic publishers. National Catholic Reporter has been a CPA member since 1964.

According to the 2016 Catholic Press Association Directory, CPA member newspapers have a total circulation of more than 4.7 million and member magazine circulation is more than 5 million.

[Tom Roberts is NCR editor at large. His email is troberts@ncronline.org.]

*An earlier version of this story misidentified Nashville as an archdiocese, transposed Bransfield's first initial and middle name, and misspelled Musacchio's last name. Language about Musacchio's title has been clarified.

Archbishop Kurtz to begin three months of treatment for cancer